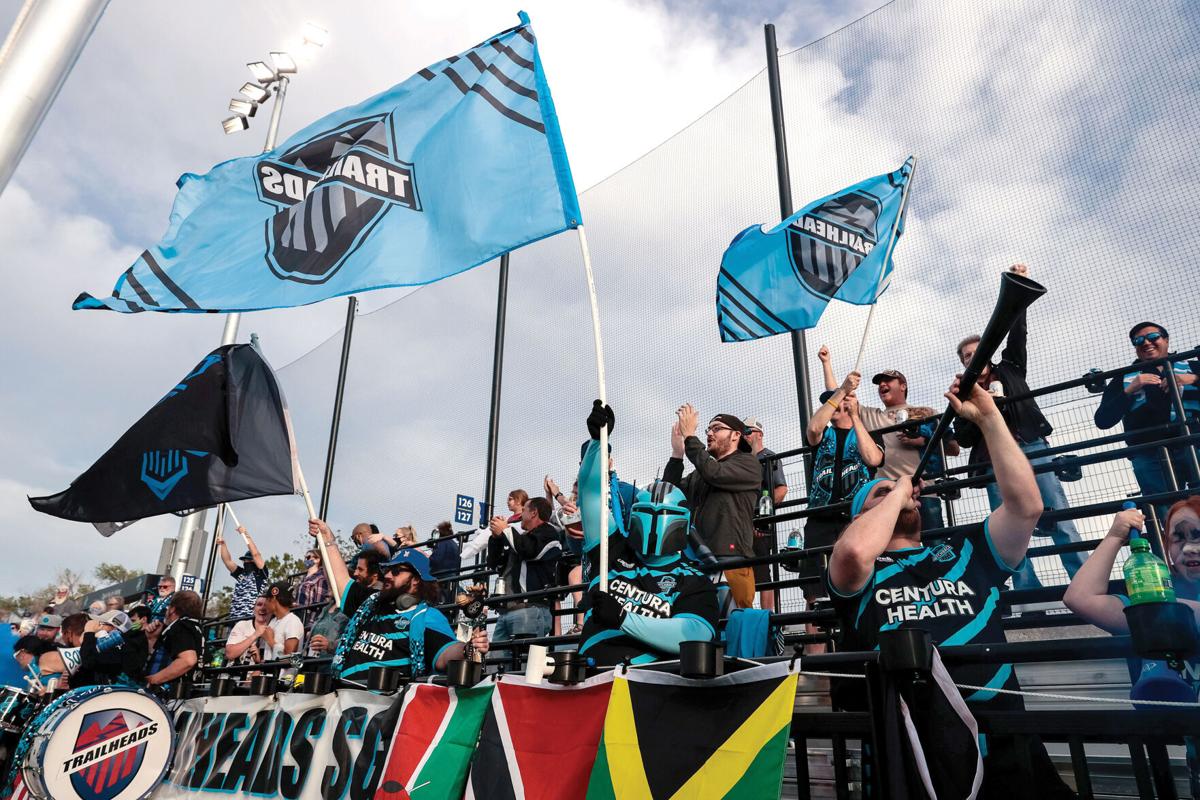 The United Soccer League is popping up in new downtown stadiums around the country. New development, boosts to business and parking woes are part of the discussion. 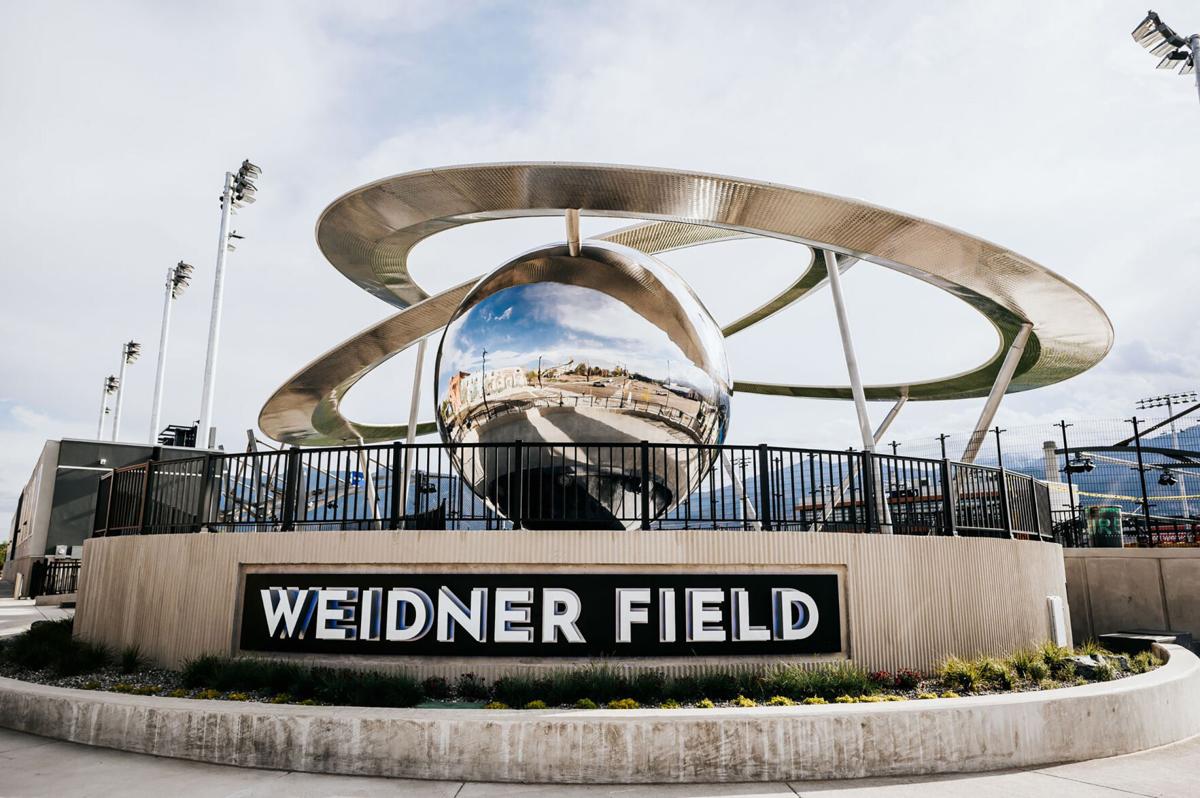 The Colorado Springs Switchbacks FC plays in one of 35 United Soccer League markets around the country.

The Colorado Springs Switchbacks FC finally hosted its first home game on May 21 at Downtown’s new 8,000-seat Weidner Field. With COVID restrictions loosening, the stadium was able to increase capacity to 70 percent a few days before gameday and still managed a limited sellout of 5,600 seats. Colorado Springs Switchbacks President Nick Ragain found it to be a positive development, but not without its issues.

“It was great to have 5,600 fans in the building,” Ragain said. “But it created some operational opportunities” that included reconfiguring the seating manifest at the last minute to accommodate the increase in fans.

Despite the logistical headaches, Justin Papadakis, chief operating officer and chief real estate officer for the United Soccer League, says he is “extremely pleased with the sellout crowd at the stadium opener; we expect near sellout crowds throughout the summer.”

THE FUTURE OF DOWNTOWN

Papadakis says building more stadiums in city centers is a part of the USL’s downtown initiative.

The league is active in 43 markets (31 in Championship and 12 in League One) and new soccer-specific stadiums are being developed for USL teams across the country, many of them located in downtown areas. In May, for example, a new $31 million downtown stadium was announced in Spokane, Washington.

The El Paso, Texas, USL club, the Locomotives, plays in the 7,500-seat Southwest University Park Stadium, one of the older downtown stadiums in the league. According to numbers from the marketing and communications team of the El Paso Chihuahuas — a Triple-A baseball organization that shares its downtown stadium with the Locomotives — the stadium generated more than $6.7 million in state and local tax revenue from 2014, when it opened, through 2020.

More than 900 hotel rooms and 300 residential units have been built or are currently under construction around the stadium since 2014. More than 500,000 square feet of new office space has been built in the area during that time.

And David Carl, director of communications for the USL’s New Mexico United, is hopeful a 10,000-15,000-seat downtown stadium will be approved following a feasibility study by the city of Albuquerque that is expected to wrap up in June. The appeal of a downtown stadium, Carl said, stems from ease of access due to a variety of surrounding  transportation options and a stadium’s ability to revitalize surrounding businesses.

“The accessibility is key” for the USL’s fanbase, according to Papadakis, which he says “is increasingly Millennials and young families.”

“Here in Colorado Springs, [the stadium is] very centrally located and over the next couple of years, there’ll be another couple hundred apartments right around the stadium,” he said. “So they’ll have to look no farther than their bedroom window to see this amazing stadium.”

“The accessibility is key.” — Justin Papadakis

Carl said similar downtown developments have provided “a place for businesses to come alongside the stadium. Maybe local bars and restaurants want to move in. Maybe local stores want to be nearby. And it allows the possibility for those things to happen.”

Papadakis says his team is “hearing from a lot of small business owners, particularly in the restaurant/bar hospitality space. 2020 was a particularly tough year for that sector and having thousands of Switchbacks fans week in and week out along with many other events that would take place at Weidner Field” could positively impact the bottom line of businesses near the stadium.

Ben Pate owns the Block Bar and Grill, which is about three blocks from Wiedner Field. Pate says business was better the afternoon of the season opener, May 21, than it had been during most days in 2020.

“We did notice that because of the game that day, it was busier,” Pate said.

Ragain envisioned these synergies as being a part of the gameday experience — fans stopping into nearby businesses on the way to the stadium.

Ragain says the soccer demographic “is one of the younger viewing audiences in the United States. Our demographic is kind of an urban, live, work, play, walkable type.”

Kayla Harris takes orders at the to-go window at Downtown’s Fat Sully’s pizza, which sits a few blocks from the new stadium. Though game night meant parking was hard to find, she says she is accustomed to Downtown being busy whether the Switchbacks are playing or not.

Harris says working the night shift means “you can’t really find [parking]. But we’re kind of used to having to search for parking on busy nights because Downtown is always busy as it is,” Ragain says the Ragain Family partnership that owns the Switchbacks franchise, partnered with the city and parking authority to address and increase parking north of Cimarron Street, but the walk to the stadium still takes about 10 minutes. While he says some fans will find the walk is longer than they would like, he believes most Switchbacks fans will embrace the experience of walking to the stadium.

Ragain says “there are people that will really enjoy coming Downtown and people that enjoy popping into a small restaurant or a pub” to eat or drink before the game and stop by bars and restaurants on the way back. He believes these experiences will build a fan culture as the season plays out.

Papadakis says that while parking options are being explored, he believes the parking issue will resolve itself because the targeted Millennial audience will be living and working Downtown and that the generation values public transit and rideshare apps.

Papadakis and Ragain said, with the stadium now operational, development will follow. Along with additional development, there is something else Ragain would like Colorado Springs to have that he says larger neighbor Denver already has.

“Colorado Springs doesn’t have a huge sports cultural history and we’d certainly like to be taking that next step in developing that culture here,” Ragain said.

Ragain says the Ragain Family did not invest in Weidner Field because the business opportunity was particularly great, but because the family wanted to create something that could help build community in Springs.

“To be real honest, there’s a hell of a lot of other businesses out there that are quite significantly less risk and less investment than a sports arena,” Ragain said, but he says despite the risk, he believes the potential transformation that a stadium can inspire in Downtown Colorado Springs is worth the investment.

“That’s not something that applies to just Denver or Chicago or Los Angeles or wherever. Sports can form and inspire communities,” Ragain said. “We believe that. We believe in Colorado Springs even though, up to this point, it hasn’t been able to really execute on that. So yes, there is risk. There’s always risk and in sports, there’s a higher level of risk — but we’re confident in the community.”

Editor's note: This story has been corrected. The original story reported an inaccurate number of active markets and the cost of the Spokane stadium was incorrect. The Business Journal regrets the errors.