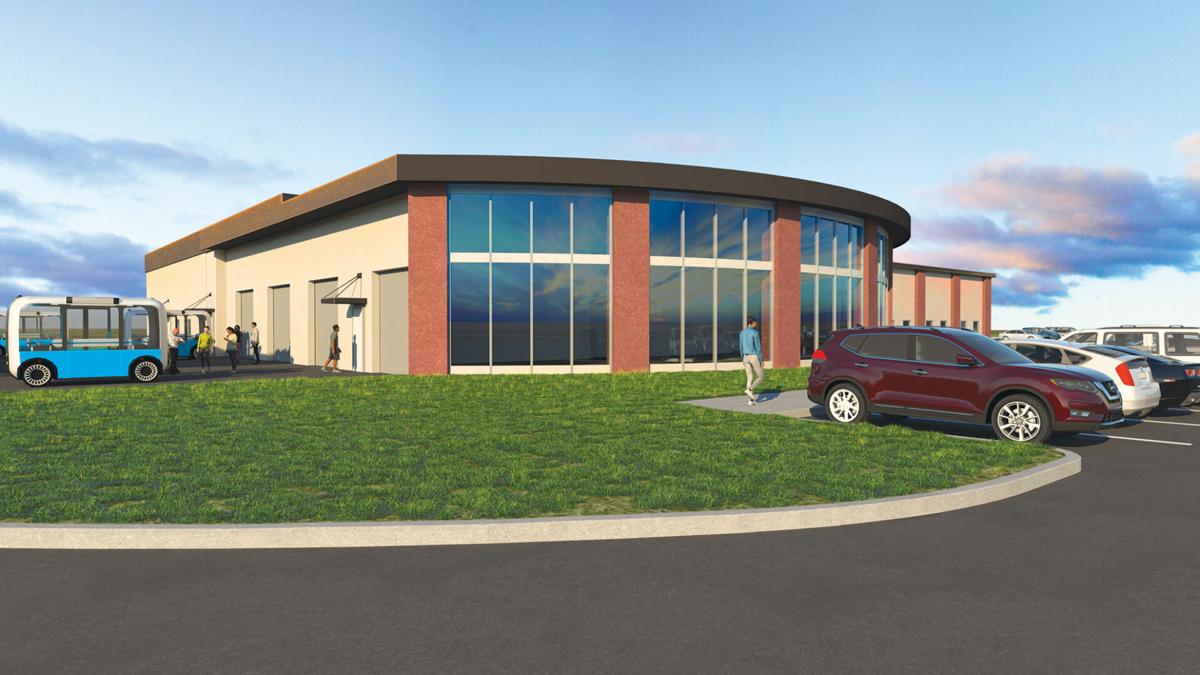 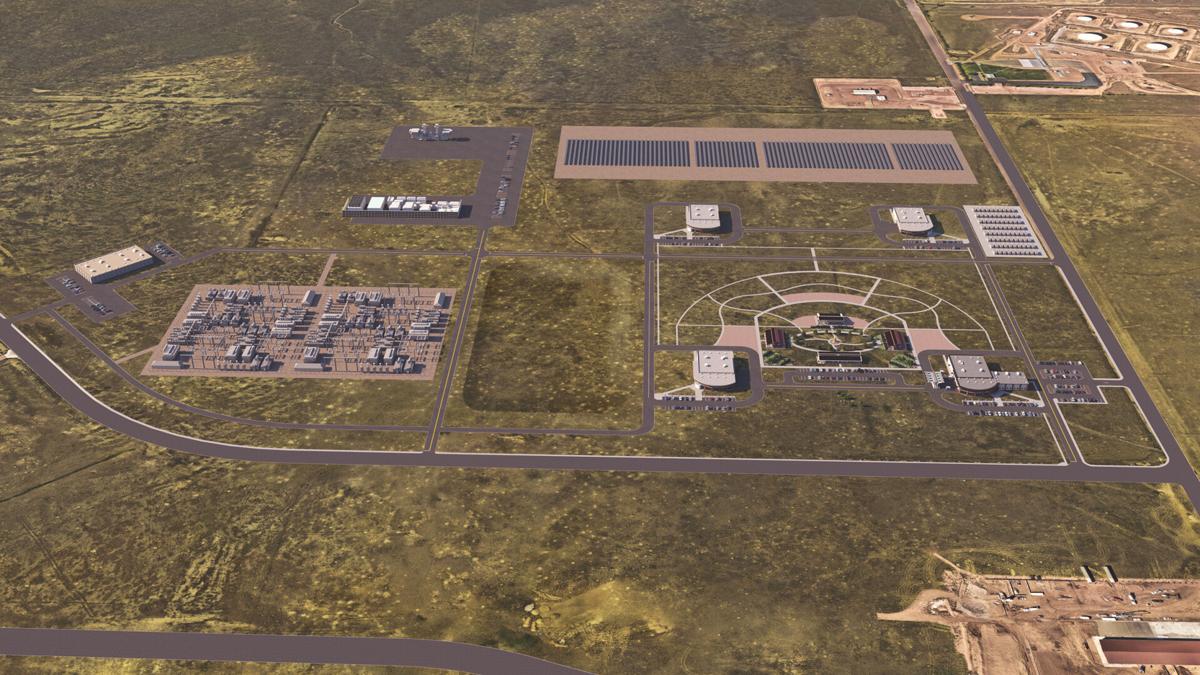 An aerial rendering of a microgrid campus

Ready for a paradigm shift? Not since the invention of the horseless carriage and the electric light bulb have Americans faced such radical changes in how they travel or power their homes. In years to come, skyrocketing gasoline prices could pressure citizens to either buy electric cars or use public transportation.

The migration away from fossil fuels to renewables also will mandate new ways to deliver power to customers, including setting up “microgrids” of neighborhoods — areas of the city that would be largely isolated from the chief network and protected against outages caused by a major storm or some other event.

Colorado Springs Utilities is all in on finding ways to wean the city off fossil fuels that have historically provided cheap power to homes and businesses and reasonable prices at the pump.

With climate change disrupting reliance on Earth-warming carbon, the city has embraced the need to overhaul how it generates and delivers power, as well as accommodate growing fleets of battery-powered vehicles.

The city-owned enterprise is taking significant steps in that direction by establishing the Advanced Technologies Campus, which like will house generators to replace its coal-fired plants, and create a testing ground for new technologies. A related effort takes a deep look at how the city could be broken up into microgrids.

“It’s the beginning of a path to transition to technologies that will bring us more opportunities and change the way we think about renewable energy,” said Utilities CEO Aram Benyamin. “Doing nothing is more expensive.”

The Advanced Technologies Campus, to be located on a 160-acre newly acquired chunk of land southeast of the Colorado Springs Airport, will be where new technologies are tested before deployment.

First and foremost, the natural-gas-driven generators will replace the generation capability of the downtown coal-fired Drake Power Plant, which will close in 2025.

The campus will cost ratepayers $50 million over roughly a decade, small potatoes for an agency with a $1.1 billion annual budget.

“It’s the beginning of a path to transition to technologies that will bring us more opportunities...”

The campus, though, “is not doing research or development of things,” Benyamin said. “We want to be able to test technologies that we would otherwise not have the space for. For example, charging of electric vehicles, smart utility software.

“We’re not a lab, but we want to be a good consumer of products that are out there and future technologies that we would absorb into our system,” he added.

While people might see an electric vehicle here and there today, Benyamin says, therein lies the future, and Springs Utilities has to be prepared to accommodate not only the city’s own fleet as it’s converted, but those of consumers and major corporations, such as Amazon, which has ordered 100,000 electric delivery vehicles as part of its “climate pledge” to achieve zero net carbon by 2040.

Amazon already operates a distribution center here and plans another.

“I’m not telling anybody to buy anything,” Benyamin said regarding electric cars. “But when you buy a [battery-powered] vehicle, we need to be there with the infrastructure to support you. I’m saying we have to be ready.”

The campus also could double as an eastern staging area and repair hub for the city’s snowplows and other heavy equipment, sharing its cost, he said.

Another aspect of employing renewables will be explored by a contractor hired to delve into microgrids — sections of the city that can be interconnected and isolated in case of a widespread outage.

Think Texas in mid-February when natural gas systems froze up, plunging the state into a paralyzed morass and impacting a good share of a multi-state area that relies on those gas sources.

If an electric outage occurred, the city could be sure certain microgrid areas remained powered up in order to provide a central fueling station, for example, or a food distribution site, community center and fire station. Because such an area would be networked on a separate grid, it would remain operational until power was restored elsewhere.

Microgrids could be located all over the city, even in small neighborhoods of a dozen homes all connected through their individual solar systems.

“Electricity keeps most of the stuff in society running,” said Gabe Caunt, a Colorado Springs Utilities engineer in the Distributed Energy Strategies Department. “If we can increase resiliency of that, we can make these disasters less extensive and less of an impact to people.”

The concept is to spin away from the metaphorical tree of traditional fossil fuels that revolves around a trunk (power plant) that sends out power through the branches to the service area.

Rather, microgrids would be self-sustaining via battery storage or power generated by solar cells on homes and businesses, thereby protecting it from a system-wide crash, no matter the cause.

“The entire neighborhood might break away from the system and run on what it has — solar panels, a storage battery. It could run without help from utilities for hours and maybe days,” Caunt said. “Then a major grid disturbance wouldn’t affect that portion. It’s a new way of doing electricity distribution that is potentially much more resilient. Instead of large massive failures, you might have certain things that matter stay on.”

The study will help CSU take a first step toward learning how to deliver power and protect against interruptions as renewables overtake fossil fuels that rely on centralized generating plants.

“It’s a newer way of doing things,” Caunt said. “Pushing toward 80 percent carbon reduction, or even 100 percent, we have to operate in new ways. This study is to learn to walk a little bit before we run.”

Here’s Benyamin’s description: “You have homeowners, six homes that have invested in solar systems, so they will spend $20,000 putting in a solar system. On the utilities side, when we put in storage capabilities, it [private investment] will defer investment that we otherwise would have to do. We will invest in the storage, but consumers have to pay subscription fees. Whether we have a battery at a substation or in a neighborhood, the bottom line is every homeowner would have an allocation of where they store their electrons.”

The common benefit for all Utilities customers results from Utilities not having to build large power plants, he said.

He predicted it will take a long time to migrate all users to renewables. And he himself doesn’t have a solar system on his home. Rather, he’s 100-percent subscribed to renewables on his utility bill, which he says costs him $10 to $15 more per month.

“It’s the beginning of a path to transition to technology that will bring us more opportunities and the way we think about renewable energy,” Benyamin said.

“We have close to a couple thousand [customers] on green power,” he added, “and also having their own system on their rooftops. More and more we see people making that choice. We need to respect their choice, but we’re not forcing anybody.”

Utilities recently chose Quanta Technology LLC of Raleigh, North Carolina, to conduct a $395,000 study of microgrids that would lay the groundwork for the resiliency Caunt and Benyamin speak of.

Though Quanta didn’t submit the cheapest price, it was chosen based on various criteria, including its stable of technology professionals who have been working on microgrids and similar energy puzzles for years. Personnel possess expertise in such areas as integration of renewable energy resources and utility-scale energy storage, power systems engineering, power regulation, electricity markets, demand management and metering.

The public can’t know what that project approach is, however, because the 12-page “project narrative,” the heart of its proposal, was redacted in full by Utilities before it was released. Watts said Quanta’s proposal was marked confidential. She cited a provision in the Colorado Open Records Act that allows withholding of “trade secrets, privileged information, and confidential commercial, financial, geological or geophysical data ... furnished by or obtained from any person.”

In any event, what the study won’t do is address pricing or identify a specific project or area of the city where the first microgrid could be built, other than to determine “technically, where would it make sense?” Caunt said.

With President Joe Biden’s pending infrastructure bill poised to pump billions of dollars into resiliency projects like microgrids, Caunt said Utilities wants to be ready to capitalize on that funding source.

Some communities already have established microgrids, such as in Borrego Springs, California, a desert town of about 2,800 people in the San Diego Gas & Electric service area.

“Borrego Springs’ microgrid is connected to the Smart Grid, but can disconnect and function independently during emergencies, supplying vital electricity to the local community through its onsite resources,” the website says.

SDGE is using a $4.5 million federal grant to upgrade

the Borrego Springs microgrid to run on renewables alone, rather than a mixture of solar and other sources, including diesel-powered generators.

The utility is partnering with the National Renewable Energy Laboratory in Golden, to create a model using supercomputers for the Borrego project, the San Diego Union-Tribune reported, noting it’s a tricky prospect, however, due to unstable voltage conditions for solar.

Caunt said the study will help Utilities figure out how to distribute power in a highly renewable world.

“I think there’s a recognition that things are changing,” he said. “We’d like to be smart about how they change and not reactive.”