Skip to main content
You have permission to edit this article.
Edit
Home
News
Profiles
Opinion
Local Events
Awards
Book of Lists
About Us
Digital Edition
Subscribe
And More...
Share This
1 of 2 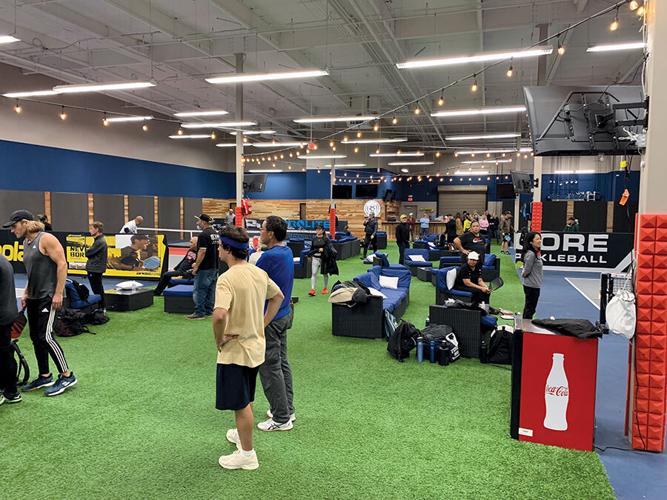 Courtside Superstores opened its first location last year in a former retail space in Irvine, California. The company is branding itself as the “Top Golf of pickleball.” 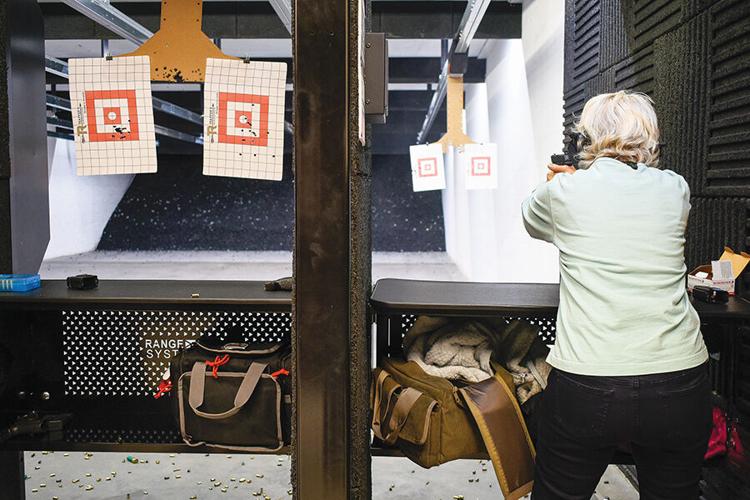 Pamela Dean shoots during a Women of Magnum class at Magnum Shooting Center South. The location in Broadmoor Towne Center was built in a former Sears store.

In Olympic City USA, it’s fitting that sports recreation businesses are taking over a growing number of vacant retail spaces, once occupied by department stores and other brick-and-mortar spots.

Focused on selling experiences and space for customers to compete in their favorite sports, these businesses have potential to draw in far more people than a traditional retail shop would, said Tim Leigh, founder of the Hoff & Leigh real estate brokerage — especially as Amazon and other corporate e-commerce companies dominate the retail market.

“We’re seeing a cycle of reutilization of retail space for recreational purposes, which suits Colorado Springs’ current culture to a tee,” Leigh said. “Those spaces that were built in the ‘70s and ‘80s have gone through their lifecycle. They’ve achieved maximum value. … People could come back in after the fact, purchase them at a discount and then retool and re-utilize them.”

A similar cycle occurred during the 2008 recession, when big box retailers fell victim to the market crash and left behind large properties in some of the city’s shopping centers, Leigh said. In the Mission Trace Shopping Center on South Academy Boulevard, churches began to take over the empty space, which was largely unwanted by other tenants, he said.

“It’s like the kiss of death, because if you put a church in there, it’s because nobody else wants to go in there,” Leigh said.

More recently, there were plans from the Solid Rock Community Development Corporation to turn Mission Trace into a community and business hub. But those did not materialize, said Pastor Ben Anderson, executive director of the organization.

As promising as some sports recreation businesses have proven to be, Leigh wonders if they will attract that same reputation.

“Are sports venues the replacement for a church in a shopping center,” he said, “or is it something that really enhances and brings people to it?”

A Test of Pickleball’s Worth

At least one vacant space in the city will see such a transformation this year.

The location, which will be named Courtside Pickleball Live, is expected to be one of about 20 Top Golf-style pickleball businesses nationwide Courtside Superstores will develop by the end of 2022, said Brett Thomas, the company’s CEO and partner. He said the University Village location is expected to open next month and has a seven-year renewable lease.

Courtside Pickleball Live, like Top Golf, follows a “triangle model,” offering 10 indoor USA Pickleball regulation courts for players and spectator-friendly seating, a retail store for pickleball apparel and equipment, and a restaurant and bar. The company’s primary feature is the play — with lessons available for beginners and membership and league options for serious pickleballers looking for a new regular spot.

Thomas is banking on the sporting aspect of Courtside Pickleball Live to drive retail and food service business. He said it’s the reason Top Golf, the driving range/bar/restaurant, has succeeded — by centering golf and recreation and cultivating a social, loyal customer

base through paid memberships and lessons.

But Will Pickleball Pay?

Thomas is undeterred by the fact that a similar food, drink and pickleball concept, North Side Social, closed permanently last year.

The brainchild of Altitude Hospitality Group Founder and Manager Mitch Yellen, North Side Social, in Briargate, was open for only 31 days before COVID-19 shut its doors temporarily in March 2020. It reopened that August, adding eight pickleball courts to an existing restaurant — but never found success with the pickleball community, Yellen said.

North Side Social instead was repurposed as The Pinery North, the second of Altitude’s corporate and wedding event spaces of the same name.

Yellen said he’s done trying to structure a business around pickleball. At North Side Social, pickleball players typically did not spend on food and drink, and a business like Courtside Pickleball Live cannot rely solely on revenue from court reservations, he said.

Leigh, whose firm has managed Yellen’s real estate ventures, also said he has known pickleballers not to be big spenders. Yellen called them “cheap.”

“When people came out to our facility [North Side Social], they came with their own water bottle, their own power bar, and they were complaining about a $20 court fee,” Yellen said.

The Courtside Superstores project is “high risk,” he said — particularly the company’s pricing model for pickleball play, as there are free outdoor courts at a number of Colorado Springs parks. According to Thomas, rates for pickleballers to drop in for all day, unlimited play at Courtside Pickleball Live are $8 per person on weekdays and $10 on weekends.

Thomas was emphatic that Courtside Pickleball Live will take a very different approach from North Side Social. Pickleball programming, such as hosting leagues, tournaments, lessons and professional play, will be Courtside Live’s primary feature, he said.

“If all you’re focused on is a restaurant, then you’re not giving people a reason to come back time and time and time again, or keep them there for loyalty reasons,” Thomas said.

Local developer Gary Erickson, who built up Polaris Pointe in Northgate and welcomed a Top Golf location to the development last year, shares Yellen’s skepticism about a successful entertainment and food and drink business centered around pickleball.

It’s a more active sport than golf, Erickson said, with multiple players competing at once, and is not as friendly to a crowd that wants to lounge, eat and drink.

The doubts about pickleball in particular don’t mean that recreation businesses in Colorado Springs overall are a bad idea; mixing sports recreation and food and drink services has proven to work for golf and bowling, Erickson said.

Yellen will be trying his hand at another restaurant and bar featuring sports recreation this spring with Train Wreck, a Downtown venue planned for Sierra Madre Street near Weidner Field. It will have a golf simulator, beach volleyball courts and large televisions to view Switchbacks FC games, which he hopes will attract a younger crowd than North Side Social did.

People ages 55 and older make up about one-third of all pickleball players in the U.S., according to USA Pickleball. Thus, the restaurant and pickleball court model flopped, Yellen said.

“When you’ve got that kind of crowd, they tend to not [say], ‘Hey, let’s go and have a beer afterwards. Let’s go hang out,’” Yellen said. “I’d rather go for the youth. That’s why Train Wreck is really geared towards more Millennial, young people. … I think it’ll be the vibe of a hangout place.”

Erickson said these types of ventures are also a great way to repurpose the city’s vacant properties left by struggling retailers.

Some recreation businesses that have taken over such spaces, like Magnum Shooting Center’s southern location in Broadmoor Towne Center, appear to be succeeding.

The center, Magnum’s second location in Colorado Springs, moved in to a former Sears store and has allowed the company to grow its membership by 200 percent, said Josh Beggs, CEO of Magnum and president of Colorado Commercial Construction Inc. The company’s membership model, classes and shooting range are services that encourage a loyal community and in-store ammunition, gun and equipment sales, he said.

“We’ve always tried to provide something that online retail can’t provide,” Beggs said. “That’s where that membership comes in — and the actual shooting experience of our members and guests. It’s something they can’t find online and can’t buy from Amazon.”

With the city’s growth over the last two decades, it is now able to support more of these sports-centered businesses, and former big box stores are ideal places to house them, Beggs said.

“From the developer side of it, we try to do about anything we can to keep from tearing old buildings down, just to be environmentally conscious and

Thomas said for Courtside Superstores, turning over former retail and big box stores has been an efficient and quicker way for the company to develop its pickleball sites — compared to building from the ground up. The group’s original location in Irvine, California, used to be an Office Depot.

The Springs’ vibrant pickleball community is excited about the new location to play indoor pickleball on outdoor-style courts, according to Joe Johnson, president of the Pikes Peak Pickleball Association.

Johnson said Courtside Pickleball Live will be a major upgrade for serious pickleballers who, for the most part, are used to playing outside in the elements or on makeshift, hardwood floor courts in gymnasiums.

They’re in desperate need of more places to play, and Johnson believes the new spot will immediately take off with high demand.

“It’s going to attract a lot of people,” he said — especially during the winter. After the city’s New Year’s Eve snowstorm, pickleballers were out shoveling snow off the courts at Monument Valley Park, Johnson said.

Brad Harvey, one of several investors in Courtside Pickleball Live and a member of the PPPA, has faith that the company’s “pickleball first” model and the strength of the sport’s regional association will make Courtside Live a popular place to hang out, eat and drink — not just play.

“The vast majority of players of pickleball around the country do it recreationally,” Harvey said. “They do it for the social aspects, to get them out of the house and get them moving.”