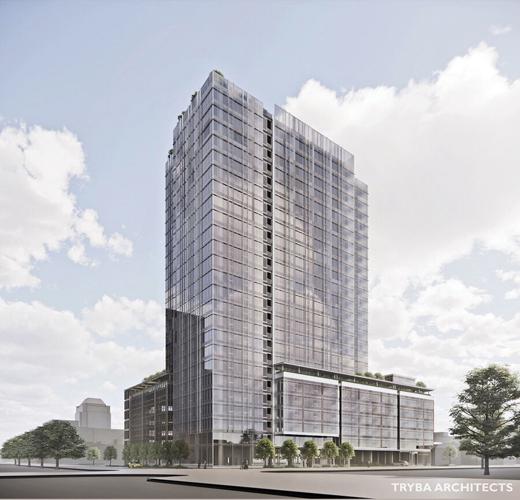 A rendering shows the conceptual plan for a 25-story apartment tower in southwest Downtown Colorado Springs. 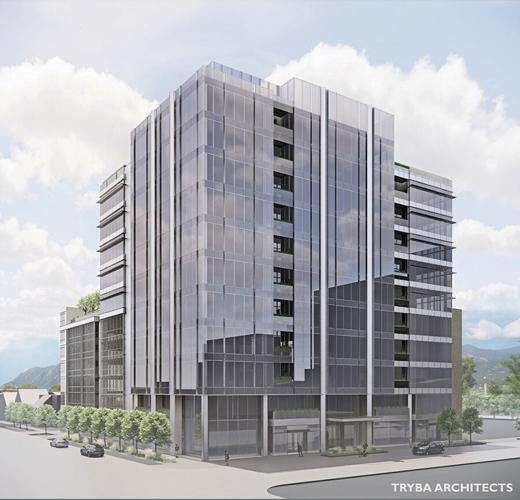 An 11-story office building is part of the proposed project.

The O’Neil Group’s proposal for a 25-story apartment building in Downtown Colorado Springs raises mixed feelings — most people either love the idea or hate it.

But development experts say there are many reasons why the building makes sense for its location — the block defined by Vermijo and Cascade avenues and Costilla and Sahwatch streets that currently houses a surface parking lot, two houses that are used as office space and a vacant warehouse.

Notably, it could help satisfy the pent-up demand for Downtown housing and office space, and attract workforce talent and primary employers.

The building is part of a $270.1 million project that also includes an 11-story office tower with more than 147,900 square feet of net rentable office space. It would be the first new Class A Downtown office project in more than 20 years.

The apartment tower will provide 316 market-rate residential units ranging from studios to three bedrooms. Retail space would occupy the ground floors of both buildings.

The conceptual design includes a five-level parking structure for each building that will contain a total of 655 parking stalls. The two parking structures will serve office employees and tenants but also will provide a public component.

“Southwest Downtown and the New South are really stressed for parking,” Alex Armani-Munn, economic development manager for the O’Neil Group, told the Colorado Springs Urban Renewal Authority Board at its Oct. 27 meeting. “The parking that we’ll be delivering will really help not just our properties, but surrounding properties as well, and could be a great asset.”

The O’Neil Group anticipates submitting a development plan to the city later this Fall and hopes for approval by March 2022.

If all goes well, the office tower could be completed by Fall 2023 and the apartment tower could be ready for occupancy a year later, Armani-Munn said.

The project would be the first private development along Vermijo Avenue, a designated signature street, and is designed to complement the amenities on the avenue that leads to the U.S. Olympic & Paralympic Museum.

The developer aims to get URA approval for the project in order to pay for public improvements through tax increment funding and to leverage private financing from equity partners.

Armani-Munn said the project could be a catalyst for further development in southwest Downtown.

“My hope, personally, with the delivery of the office, is that … it will open a wave of development that will bring more office [space] downtown, and we’ll show folks that Vermijo in that area is ready to be developed and that we can really turn it into the grand vision that was set forth with the Museum and Parks URA,” Armani-Munn said.

HOW TALL IS TOO TALL?

Myths and misunderstanding surround the issue of building height Downtown.

According to Jamie Fabos, chief communications officer for the city of Colorado Springs, “there’s a long-held myth out there about height limits, but there isn’t one” in the Downtown core.

Form-based codes, an innovative technique at the time they were introduced, focus on physical form as it relates to the streetscape and adjacent properties, rather than land use, and address the role individual buildings play in shaping public space.

“There was general acceptance that (1) the market will self-regulate the height; and (2) height maximums confine design creativity,” Fabos wrote in an email.

The central sector, in which the proposed O’Neil project is located, consists of a handful of blocks, said Susan Edmondson, president and CEO of the Downtown Partnership.

“We’re not dramatically altering the skyline of Colorado Springs.”

“I think it’s important for people to remember that Downtown is a little over one square mile in a city of nearly 200 square miles,” Edmondson said. “So it is a fraction of 1 percent of the city land mass, and within Downtown, this central sector is a fraction of the Downtown footprint. So we’re talking about a very small, finite area suited for larger scale and verticality.”

“It specifically talks about increasing the density of residential product within the core,” he said.

Conceptual drawings that were incorporated into earlier plans also showed taller buildings, indicating that they have been projected for Downtown for at least 15 years.

Furthermore, “the height issue has been miscast a little bit,” Merritt said.

Ceiling heights are higher in commercial buildings — 13 feet, as opposed to 10 feet in residential buildings, so comparing them on the basis of number of stories can be misleading.

At 273 feet, “our building’s only going to be in the neighborhood of 20 feet taller,” Merritt said. “It is a little bit higher, but not dramatically higher. … We’re not dramatically altering the skyline of Colorado Springs.”

In fact, the apartment tower isn’t technically a skyscraper. To qualify as a true skyscraper, a building must rise at least 492 feet, according to The B1M, a construction news and video site.

To put the height issue in wider perspective, all of the top 10 tallest buildings in the state are considerably higher than the residential tower will be.

The state’s tallest building, Denver’s Republic Plaza, has 56 floors and is 714 feet tall — and there are 136 buildings in the United States that are taller.

No. 10 on Colorado’s top 10 list, according to USAByNumbers.com, is Denver’s Spire condominium tower, which rises 478 feet and consists of 42 floors.

“I don’t think this is going to be an anomaly,” said John Olson, owner of Urban Landscapes. “As things progress in the city, and in all cities, development is tending to go back toward the middle of the city. In places like Downtown where, in the future, the automobile could be an option instead of a mandate,

Olson, who spoke as an urbanist and landscape architect rather than as a member of the CSURA board, said that, given Colorado Springs’ size and rapid growth, it’s surprising that its downtown buildings aren’t already higher.

“I am more of a proponent of five-to-six stories,” he said. “If we had that all across Downtown, I think it would be really cool and great for the city. But the 25 stories does not offend me.”

Asked if he thinks a 25-story building would set a precedent that others would want to follow, Olson said, “it’s more of an indication of the demand and success that the city as a whole has been seeing.

“The real question that the citizens should be thinking about is not necessarily this one proposal, but what that code says,” he said.

“I’ve always felt that that the fact that there’s no height restriction is probably not the best policy to have in the Downtown Form-Based Code,” Olson said. “Even if you set that cap at a high number, to have a number is important, because otherwise you could have somebody come in and saturate the entire market with a 100-story tower.”

In fact, in 2015, hotelier and attorney Perry Sanders proposed just that — a 100-story residential skyscraper in Downtown.

In 2015, O’Neil Group founder and CEO Kevin O’Neil launched the Catalyst Campus that incorporated the old Santa Fe Railroad Depot in east Downtown. That became the group’s signature project, and it has created more than 1,200 jobs and injected $270 million into the local economy.

“O’Neil Group at its core is about job creation, with Catalyst Campus being a great example,” Merritt said. “With companies like Braxton [Science and Technology Group] that Kevin has owned, it has always been about job creation — to get that tech talent. to get those kind of headquartered companies to look at Colorado Springs.”

Although the workforce talent local employers want to recruit may have left bigger cities, many still want to live and work in an urban environment.

“So when we’re looking at building the residential tower and a commercial tower, it’s about delivering product that fits within that goal of attracting and retaining talent and these primary employers,” Merritt said. “That’s what’s going to be needed.”

While this is the company’s first high-rise residential project, the development team includes GE Johnson Construction, which has extensive experience in a variety of buildings.

The O’Neil Group anticipates that the residential and office towers will also contribute substantially to Colorado Springs’ economy.

According to the URA application, an economic impact report prepared by Dr. Tatiana Bailey of the UCCS Economic Forum found that the project would generate about $4.6 million in direct local tax revenue and have a total direct economic impact of more than $321.7 million through construction and its first seven years of operation.

While some comments on social media have opposed the project on the grounds that it could lead to more high-rise buildings and would change the character of Downtown, Edmondson pointed out that “the historic charm of the Tejon Street corridor remains.

“Frankly, the character of Downtown for a couple of decades has been a lot of vacant lots and empty surface parking lots,” she said. “I don’t consider that a downtown of pride. These lots that have not been doing their part for the city’s economy and for housing people have much higher purpose.”

Edmondson said numerous other Downtown projects are in the works and that she would not be surprised to see more proposals for multistory buildings.

“I think it’s important at times like this to be less concerned about height and ensure we are asking the right questions to get the quality architecture that our city can be proud of,” she said. “So whether a building is one story, five stories, 10 stories or 25 stories, is the architecture something befitting our beautiful city? Those are the discussions I think we should be having.”