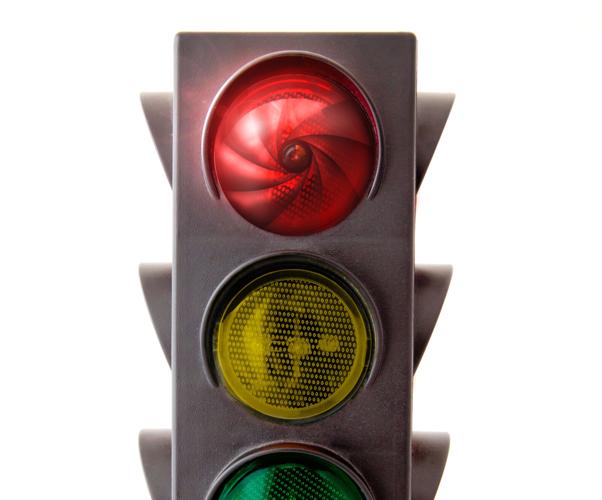 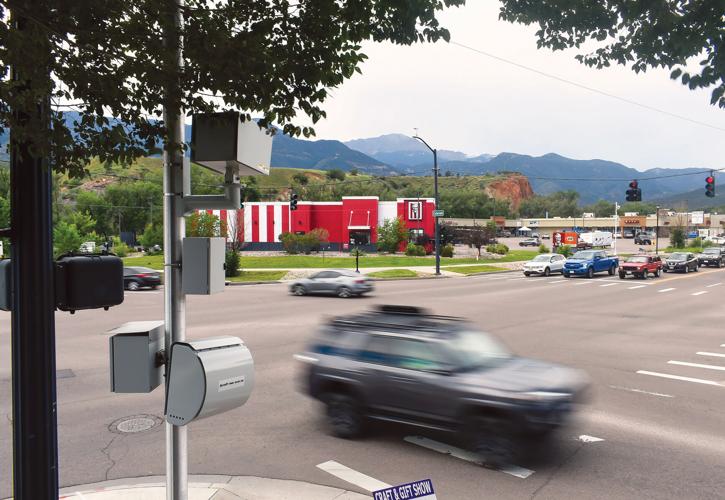 CDOT reported 49 fatal traffic incidents happened in the Springs in 2021.

For Lt. Shannon Snuggs, it’s been “crazy” to see some of the close calls that the city’s red-light cameras pick up on video, since she took over the Red Light Safety Camera Program last month.

Snuggs is part of a team of Colorado Springs Police Department officers tasked with reviewing surveillance video collected from the red-light cameras — now at 18 intersections throughout the city — to determine whether they picked up a clear violation of the law, so she’s seen the footage. She remembers one red-light runner incident caught on camera at East Platte Avenue and North Murray Boulevard, near The Citadel mall, where a man on a Segway was nearly hit.

“The light turns red — it’s red, maybe a second, a second and a half — and this guy’s on a Segway going across,” recalled Snuggs, an officer in CSPD’s Protective Security Section. “And then a car blows the light. I kid you not — this poor guy on a Segway, if he had long hair, the car would have clipped it with his side-view mirror.

“It was one of the ones where your heart stops, and you just think, ‘Oh, my gosh, that was so close.’”

It’s these types of incidents — and for some, a behavioral pattern of red-light running — that the city is trying to prevent with its red-light camera program, Snuggs said. The program returned to the Springs in May 2019 after being discontinued under former Mayor Steve Bach in 2011, and will reach its cap with cameras at 20 different intersections by the end of this year, she said. That’s double the number in place during 2021, according to violation statistics on CSPD’s website.

In addition to the 18 cameras currently active, CSPD will add two more before the end of the year at Dublin and North Powers boulevards and East Woodmen Road and Vincent Drive, Snuggs said. CSPD will start its 30-day warning period for the new cameras once they are installed. After that, citations will come with a $75 fine.

What remains unclear, though, is how effective the cameras have been at reducing red-light running in the city since 2019.

Opponents of the program, some of whom characterize it as a “revenue grab” by city government, said there’s no evidence to suggest that they make roads in the Springs safer. Bach and former CSPD Chief Pete Carey said as much in 2011, when City Council voted to end the program, said Rebecca Marshall, one of the co-founders and editors of SpringsTaxpayers.com, a watchdog media outlet that publishes articles critical of government spending.

“I’m not convinced at this point it is making our community safer, or our intersections safer,” Carey told KKTV at the time.

CSPD has yet to do a study on whether the red-light cameras have reduced the number of accidents at the intersections where they’re set up, Snuggs said, simply because there aren’t enough data on crashes between the first 2019 installations and present day.

The first year of the program only provided a partial year of data since cameras were installed in May, and once the COVID pandemic hit in March 2020, road traffic overall was artificially reduced throughout the rest of that year and into 2021, Snuggs said.

Discrepancies between the years have made it impractical to do an analysis of crash statistics at the red-light camera intersections — 2022 will be the first full year CSPD has “a full picture” with accurate data to look at, she said. And it’s standard to do these types of analyses with three to five years of statistics in the books, Snuggs added.

“We just don’t agree on the solution.”

“While 2020 was a record fatality year, the number of cars actually out on the roadways was significantly decreased,” she said. “I don’t want to take a look at our data and say, ‘Look how great we’re doing, we’ve totally impacted crashes in the area,’ when that’s not really accurate. I think 2020 and 2021 are really anomalous years because of the pandemic and don’t result in a good dataset for us to look at just yet.

“I wouldn’t anticipate enough data to be interpretive for at least another year or two, just to get back to something resembling normal,” Snuggs added.

It’s also unclear thus far how much revenue the program brings in from the $75 fines issued to red-light runners. The fines cover the cost of the program — payments made for camera installation and maintenance to vendor Verra Mobility, Snuggs said — and what’s left after those payments goes into the city’s general fund (not to CSPD), according to a frequently asked questions page on CSPD’s website about the program.

Snuggs said that all fines are processed through Colorado Springs Municipal Court. City spokesperson Max D’Onofrio told the Business Journal via email that neither the court nor the city’s Finance Department “have specifics on how much the red-light program has generated in funds since it was started.” Funds collected from red-light running fines are grouped together with parking ticket fines, D’Onofrio wrote.

In its intersection statistics for 2021 posted online, CSPD reported it issued a total of 20,695 citations for violators at the 10 intersections where cameras were installed. This includes the drivers verified by officers to have run a red light; Snuggs said there are humans double-checking that they are “clear violations.”

Based on the number of citations, the program would have brought in more than $1.5 million during 2021 and nearly $1.2 million in 2020, when there were a reported 15,851 citations issued for three to eight total intersections with cameras. CSPD added more cameras over the course of 2020, reported the Business Journal’s sister publication, the Colorado Springs Independent, in September 2021.

Through July of this year, there were 13,381 citations issued, which would total just over $1 million in program revenue, putting 2022 on track to be the red-light camera program’s most profitable year. This year also began and will end with more intersections equipped with cameras than in previous years, so an increase in violations and revenue is expected.

Of the millions in revenue collected over the last two years, Snuggs was unable to say how much, in total, actually has gone towards funding the program and what goes into the city’s general fund. CSPD Senior Public Communications Supervisor Robert Tornabene told the Business Journal the department “currently pay[s] $55,000 per month for all cameras.”

“As we add cameras, it will increase by $5,500 per month per camera,” Tornabene said in an email.

What CSPD does know is that Colorado as a whole has a severe problem with traffic deaths caused by red-light running, Snuggs said.

The state ranked sixth in the nation for deadly red-light runner crashes, according to a AAA Foundation for Traffic Safety analysis of 2017 accidents, the organization’s most recent analysis of this type. The Colorado Department of Transportation reported that in 2021 there were 49 fatal traffic incidents in the Springs — not necessarily related to red-light running — and Snuggs said through July of 2022, there have been 21 fatal accidents on roads in the city.

Most of the fatal accidents this year involved drivers under the influence and motorcycle crashes. CDOT reported in August that 17 motorcyclists have been killed in El Paso County in 2022, the highest number in the state. Snuggs believes that the red-light camera program could help reduce those types of crashes, too, by changing driver behavior in general.

“While we never want there to be impaired drivers out there [and] we want motorcycle [riders] to wear helmets and ride safely, these red-light cameras being in intersections … get that muscle memory of, ‘Don’t run this intersection, I’m going to get captured on camera,’” Snuggs said.

The cameras “make them change their driving behaviors,” she added.

Marshall, of SpringsTaxpayers.com, is not so sure.

“We can all agree there is a problem on Colorado Springs roads — red-light runners, speeders, etc.,” she wrote in an email to the Business Journal. “We just don’t agree on the solution. We’d like to see longer yellow lights and more live police enforcement.

“It’s looking like it’s going to be the deadliest traffic year on record,” Marshall said. “It looks like drugs and alcohol are the big safety issues.”

Drivers want to feel safer on the city’s roads, and the cameras give “an illusion of safety,” she wrote. But Snuggs said CSPD doesn’t have the staffing for officers to sit at these intersections and enforce the law.

She called the cameras a “force multiplier” but acknowledged that “the red light cameras are different than if an officer was physically sitting in an intersection and viewed the violation.”

Some good news for residents opposed to the red-light cameras is that CSPD will not be adding more than the 20 installed by the end of this year, at least for the near future.

“That’s the number of cameras we have agreed to at this point,” Snuggs said. “Now we’re going to be at a time where [we’ll] take a look at what we’re doing.

“Let’s look at the impact that we’re having with these cameras before we commit to more or moving [them],” she added. “Let’s get some information to be able to effectively say, ‘Are we doing what we anticipated we would be doing