You have permission to edit this article.
Edit
Home
News
Profiles
Opinion
Local Events
Awards
Book of Lists
About Us
Digital Edition
Subscribe
And More...
Share This
1 of 11 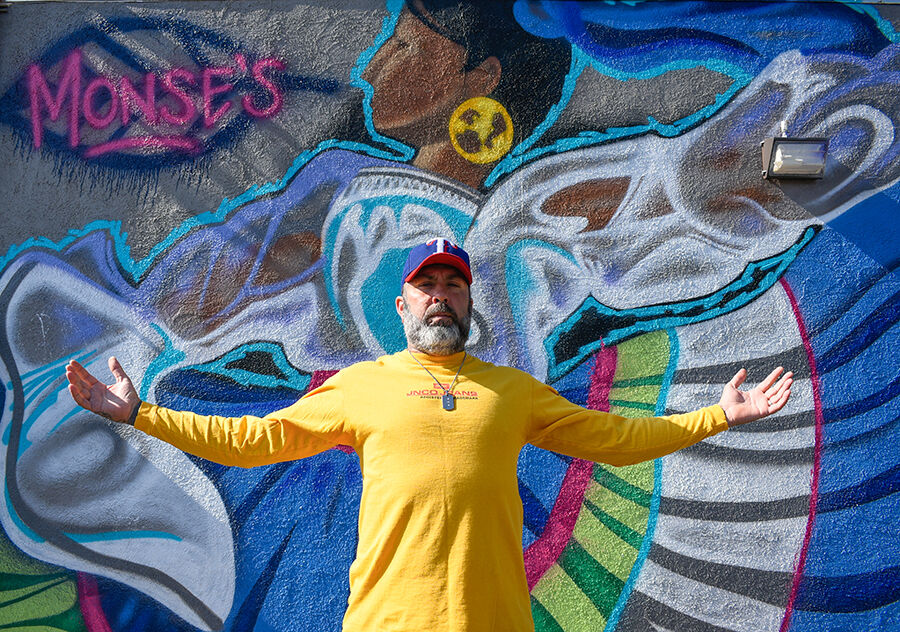 Artist Paes164 stands in front of his new mural, completed Sept. 7, at Monse’s A Taste of El Salvador. 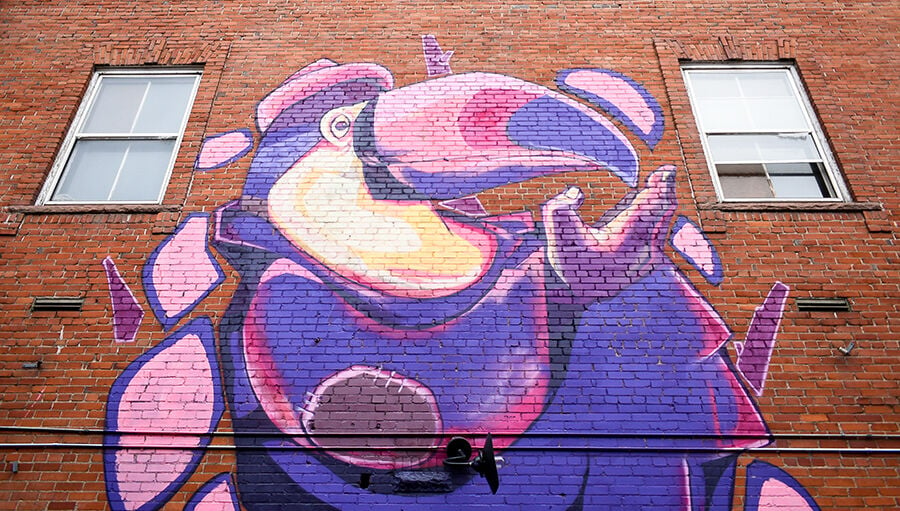 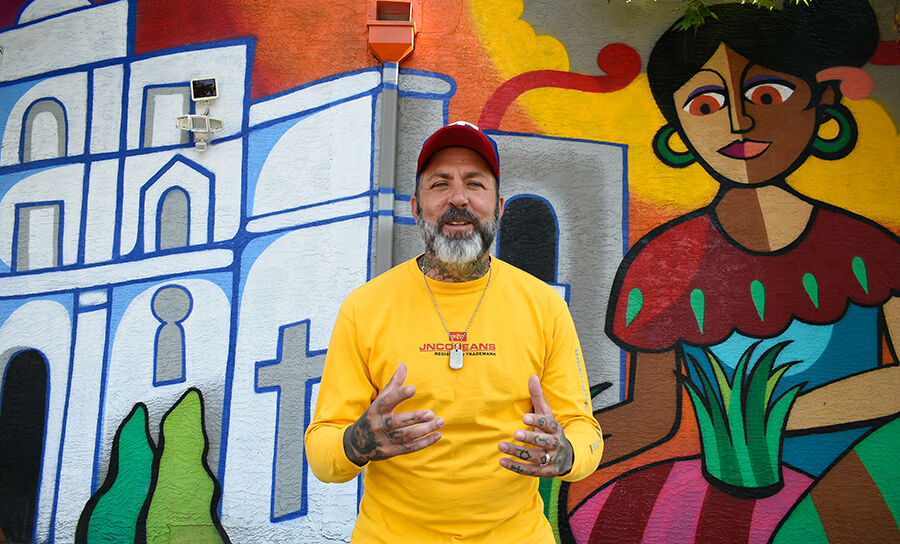 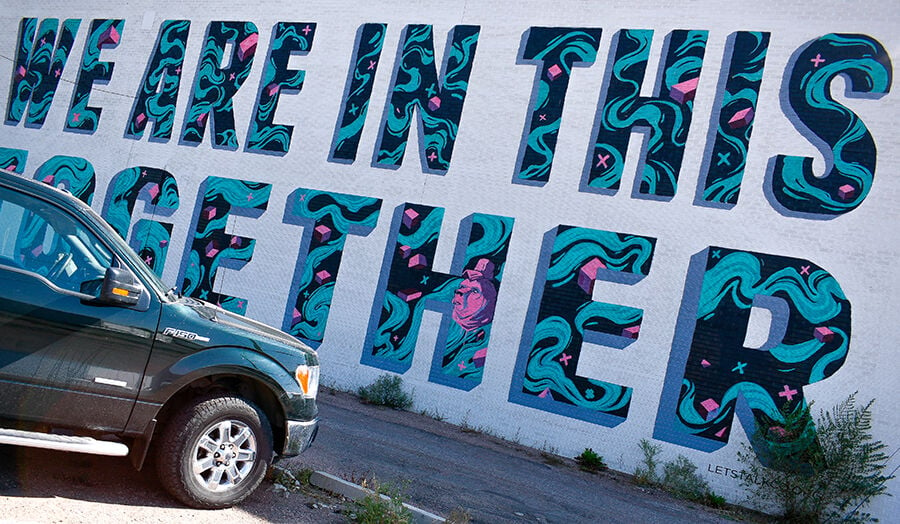 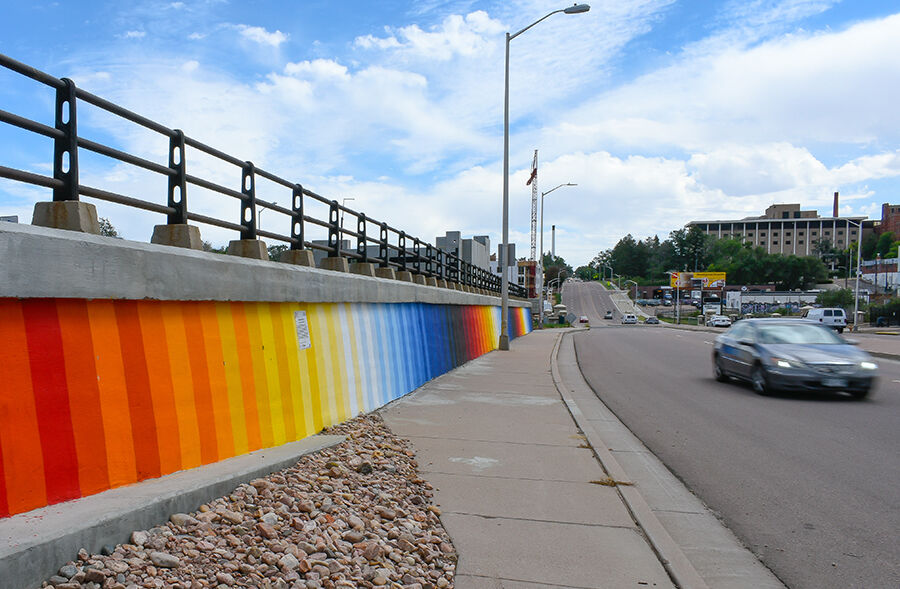 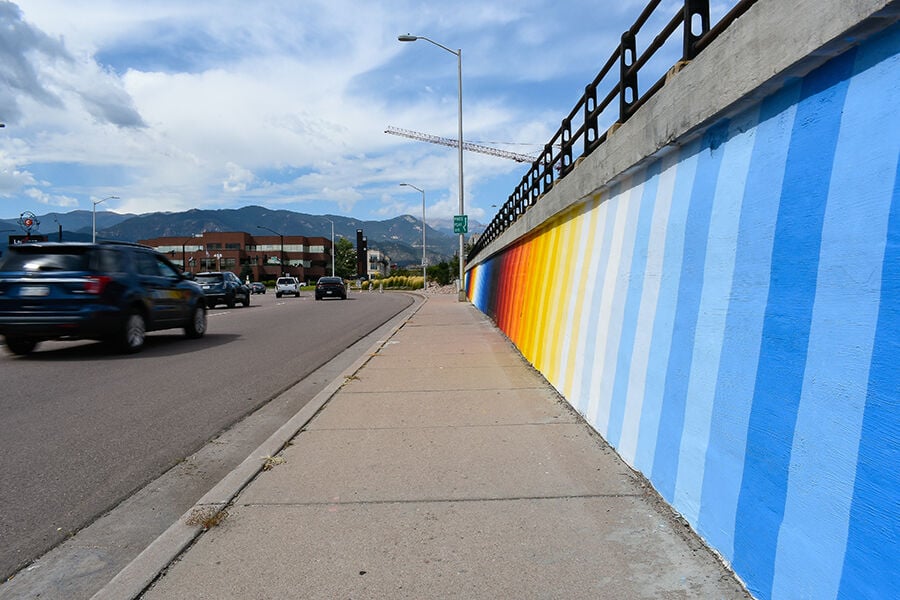 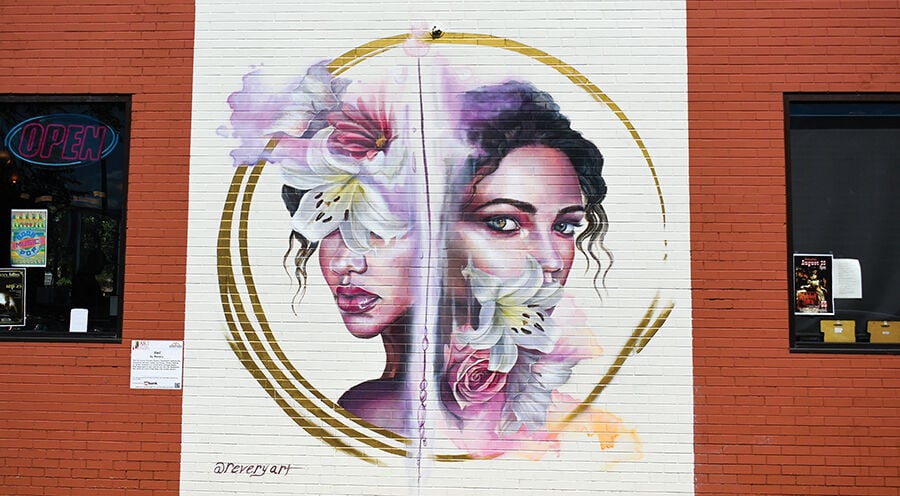 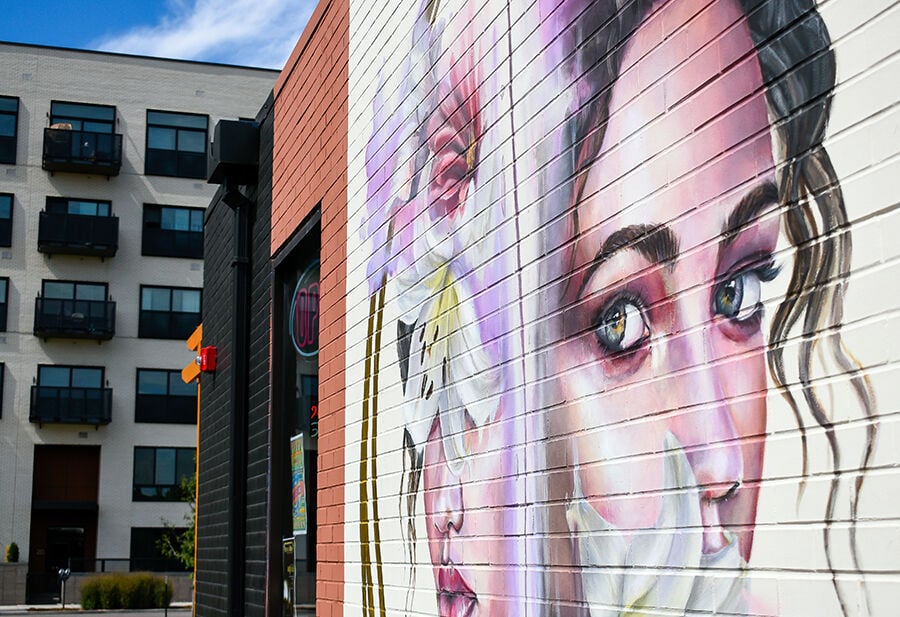 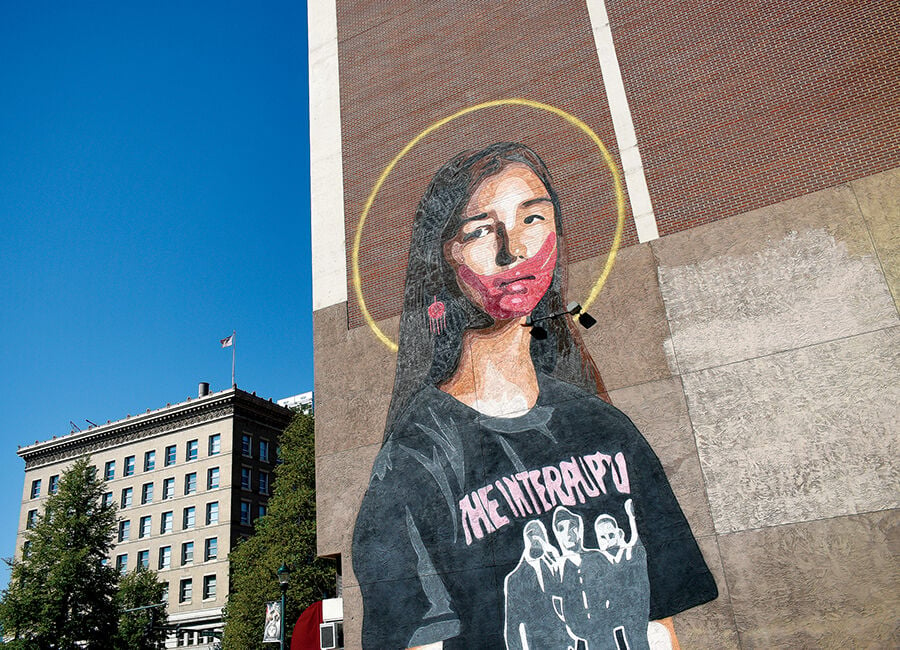 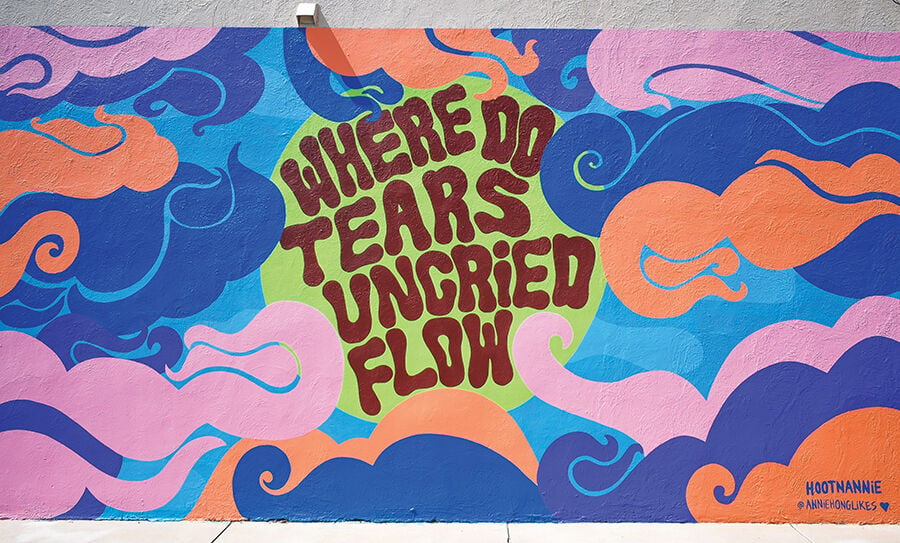 “The Other Side” by Annie Hong, on the wall of Craddock Commercial Real Estate (337 E. Pikes Peak Ave.), is a tribute to the victims of the March 2021 Atlanta shooting.

Artist Paes164 stands in front of his new mural, completed Sept. 7, at Monse’s A Taste of El Salvador.

Monse and Timothy Hines discovered muralist Paes164 through a mutual friend. It wasn’t long before two vibrant murals appeared on the walls of the couple’s Old Colorado City building; the most recent is a woman dancing, a tribute to the El Salvadoran culture behind their family-owned pupuseria.

As the city transitions into a new phase of the pandemic, murals like those at Monse’s Taste of El Salvador are a testament to how art — often relegated to the realm of galleries and museums — can become a community revitalization tool.

The relationship between business owner and muralist is mutually beneficial. By commissioning a mural, a business owner is investing in their company; at the same time, they’re providing work for a local artist which, in turn, supports the city’s burgeoning art community. Residents and tourists benefit from the city’s expanding collection of public art — and the murals often signal the services or philosophies of the businesses behind the walls.

“Salvadoran food already has its own niche,” said Timothy Hines. “It’s unique and different enough that people aren’t always familiar. Broadcasting in a [visual] sense adds to that. I think it makes people curious.”

For Paes and his clients, the process is straightforward. The business owner tells him their vision. Paes visits the property and quotes a price. Then he plans around the owner’s schedule to make the vision a reality — sometimes, this means painting overnight. Typically, he can finish a mural in a day.

“Advertising and marketing efforts are expensive. There are lots of ways to do it,” said Hines. “This one is long lasting.”

At 24 years old, the Downtown Partnership is one of the oldest public art programs in Colorado, originally established by businesswomen in the ’90s as a creative placemaking and revitalization effort. The nonprofit had been hosting Art on the Streets, an annual public art exhibit, for two decades before introducing murals in 2018.

“It was a recognition of the fact that murals in public spaces are becoming an accepted and requested part of any urban landscape,” said Claire Swinford, executive director of Downtown Ventures, the nonprofit arm of the Downtown Partnership. “It was sort of an unforeseen outcome of this program’s success — that we were finding fewer and fewer places to put sculptures. And we started looking at all of these blank walls and thinking, ‘Well, that’s a way to activate public space that clearly needs activation.’ We couldn’t stick a sculpture there, but we could sure as heck paint a wall.”

While it’s difficult to quantify which types of public art “perform” better, mural work does tend to be more financially accessible.

“A lot of my clients that have a lot of money would rather pay me a couple grand to do a mural,” said Paes. “Sculptures are just so much money.”

In welcoming art forms with fewer gatekeepers, the city’s public art scene is able to more accurately reflect its community.

Muralism as an art form is resilient — less vulnerable to the threats of gallery closures, capacity limits, funding restrictions, and other barriers to implementation and public engagement. While COVID-19 has handicapped most of the local arts scene, many muralists were actually busiest at the height of lockdown. They simply continued to operate as they had before: outdoors, distanced and with supplies that were relatively cheap.

The pandemic has also demonstrated public art’s potential to drive economic activity. For many local businesses Downtown, foot traffic is an essential component of their business models. Public art is one way to drive more pedestrian participation, especially during a time when people are more reluctant to leave home.

“The metrics that we have show a 41 percent decrease [in pedestrian visits to the Downtown area] year over year from 2019 through 2020,” said Swinford. “That is bleak, and that is scary if you are a small business owner. But Art on the Streets, at that same time, was one of the few cultural outlets that could operate safely during COVID.”

Downtown hosts the largest concentration of locally owned restaurants in the region — and restaurants, said Swinford, were one of the pandemic’s hardest-hit industries. (They saw a 35 percent decrease in sales tax revenue in 2020.)

“We did hear from those business owners [who had] a new piece of public art go up on their block, that they were seeing more people coming down that block than they would have otherwise,” she said. “And so we continue to be able to say that public art is a driver for the economic health of the heart of the city.”

The city measures how well its creative assets translate into economic activity via a quantitative metric created by the Western States Arts Federation: the Creative Vitality Index. Downtown Colorado Springs’ CVI score is a 6.4 (versus a national baseline of 1) — one of the highest scores in the state.

“A strong downtown can really enhance [people’s] sense of investment,” said Swinford. “It can encourage people to be more active participants in community life. And that does translate over and over and over into the success of small businesses, into better public health, into a greater community cohesion. And [studies] say that public art is one of the best tools that we have to spark that kind of positive interaction, that type of resiliency, especially when we talk about revitalizing urban areas that have maybe gone through periods of downturn. Public art is one of the things that’s proven to help a city get back on track.”

Annie Hong, a Los Angeles-based artist whose mural “The Other Side” (337 E. Pikes Peak Ave.) was featured in this year’s Art on the Streets exhibit, has also done mural work in Seoul and L.A. In Seoul, street art is more “under the radar,” said Hong; although in recent years it has begun to gain mainstream acceptance. In L.A., on the other hand, streets are rife with graffiti, murals and art.

“While I was in Colorado Springs, I was actually very pleasantly surprised to see so much public art throughout the city,” said Hong. “In comparison to L.A. and Seoul, Colorado Springs is a relatively small city. And so seeing [that] amount of art for a smaller city was really just refreshing.”

Public art sparks a renewed interest in the area in which it resides, said Hong. Interest in a mural on a commercial street may be redirected to the local coffee shop near it.

“Public art has been my main focus because of this access to community, this immediate connection with the public,” said Hong. “I think there’s something special about public art because of that fact: You don’t have to go to a museum, you don’t have to go to this bougie art gallery to see some amazing art. It’s literally in the community, it’s in the cities. You can drive by a mural, and it can change the course of your day.”

Swinford agrees. The value of public art extends far beyond the immediate economic impact for the business owner; there is a broader value in terms of community connection. “Hire local creative entrepreneurs,” said Swinford. “If you can hire local artists to [create public art], then you’re contributing to this feedback loop that makes our community a more resilient and enjoyable and culturally rich place.”