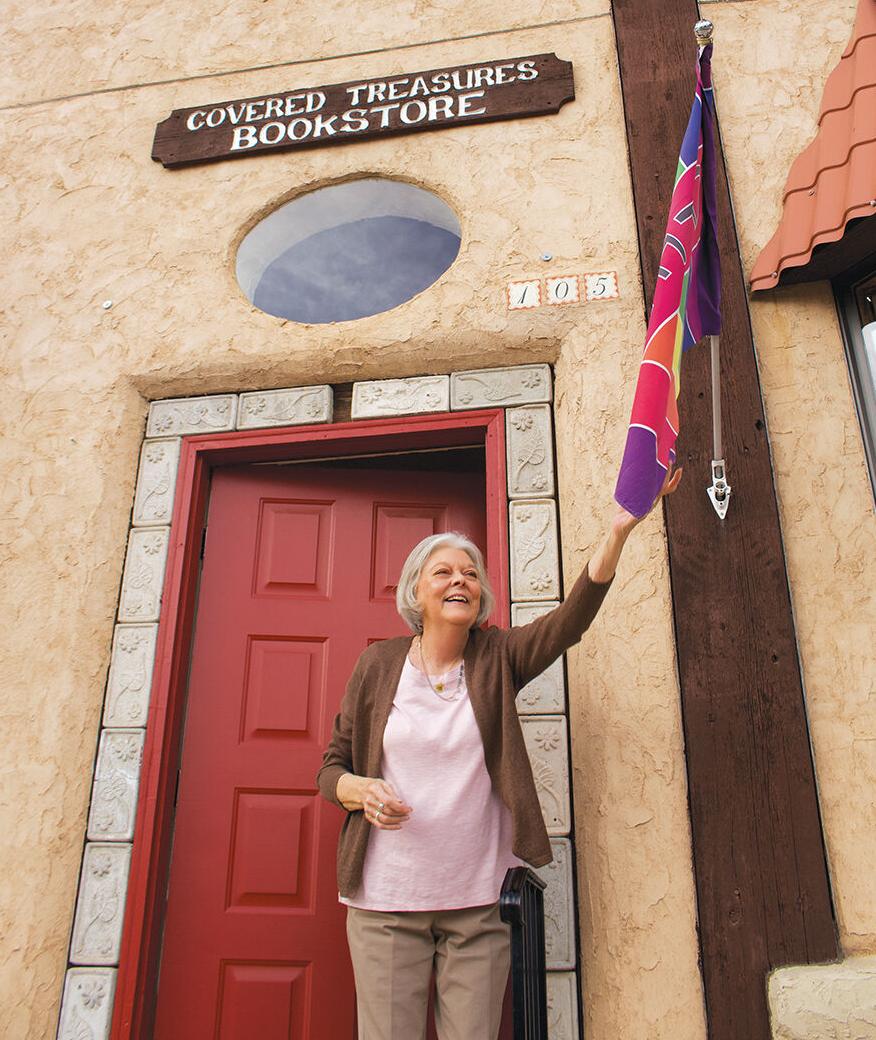 Tommie Plank adjusts her flag at Covered Treasures Bookstore, which she opened with a partner in downtown Monument in 1993. 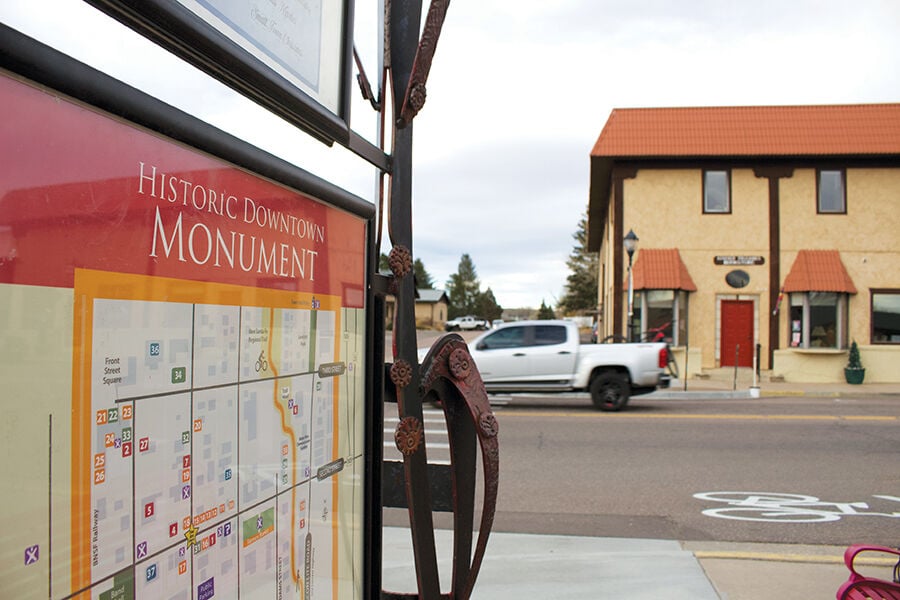 Monument’s downtown business district is known for iconic small business like the Covered Treasures Bookstore, and newer signature shops like Lolley’s Ice Cream, as well as popular restaurants and breweries that give the district its distinctive mountain-town flavor.

“I really love that our shopping is broken up into different areas,” said Terri Hayes, president and CEO of the Tri-Lakes Chamber of Commerce. “Downtown Monument is a great place to go to have lunch and do some interesting shopping, pick up some gifts for people. Jackson Creek is more what I like to refer to as errands — it’s the necessities area.”

Small-town main streets don’t usually change a lot, Hayes said. Outside of a few stores and restaurants coming and going over time, they generally look pretty much the same.

But a big change is coming to Monument’s downtown. It’s a project that will not only expand downtown’s commercial and retail footprint but also will add housing for the people who work and shop in the business district.

The land, which abuts the intersection of those two streets, is the former site of the Sibell family home. The red barn built by the late Elwood “Si” Sibell, former Monument mayor, still stands, But it soon will give way to make room for the new uses.

Plans are still in development, and details of the project have not been released, but Hayes and Monument Planner II Debbie Flynn said that when the project is completed, it will greatly benefit downtown Monument.

“I’m very excited about what that development is going to be,” Hayes said. “The developer is someone that definitely cares about the community and wants to do a project that fits and helps the businesses downtown.”

Planned apartments and townhomes are expected to be attainably priced for tenants such as seniors, teachers, police officers and firefighters, and employees who will be able to walk to work, Flynn said.

Depending upon when plans are submitted, it could be a year and a half before those commercial and residential spaces are occupied, Hayes said.

“But it’s going to be a great addition to downtown Monument,” Hayes said. “Right now it’s just an empty piece of property, but that year and a half is going to fly by before we know it,” she said.

On the land to the west of Second and Front streets, the structures on the property fell into disrepair after the deaths of Si Sibell in 2018 and his wife Dorothy the following year.

The property went up for sale and was purchased earlier this year by Randall Estes, who formed Investing in Front Street to develop the parcel.

Hayes described Estes as a local person “who is very selective in what he does.”

Evidence of his commitment to the town is that he has been allowing Monument firefighters to store some of their equipment in the barn, she said.

“We’ve been through some hardships like any business has.”

Flynn said she has met with the developers to discuss their vision for the property.

“They have already done some lot line adjustments with the property owners on either side of them, and they annexed into the town, so the whole property’s in the town of Monument,” instantly extending the downtown area.

“So far, they’ve knocked the mercantile building out because it was in disrepair,” she said. “They wanted to keep it and use it as a façade, but you couldn’t even step in it. The barn will eventually come down too.”

The developers are working with Bucher Design Studio, an architectural design firm in north Colorado Springs, on final design of the project, Flynn said.

Flynn emphasized that details of the plans could change before the developers submit them, but her understanding is that the project will consist of up to nine townhomes near the railroad tracks and several structures, some with shared walls, on Front Street that will house retail or commercial businesses on the ground floors and apartments above. Parking will be provided on the site.

Monument does not have design standards for the business district in its code but encourages development and redevelopment that preserves and enhances downtown’s unique character, she said.

She expects the developers “are going to make it look very nice — you can’t even tell that this is going to be attainable housing.”

Flynn noted that high-end, market-rate multifamily projects are being developed at Monument Junction and the Village at Jackson Creek. These also are mixed-use projects, she said.

The downtown project “isn’t going to add a whole lot of apartments, but it does fill a niche,” she said.

The next step for the developers will be submitting a preliminary final site plan, Flynn said. Since the property is already annexed, it won’t need to be rezoned.

The plan will undergo review but will not have to go before the Monument Planning Commission.

“We might do a little neighborhood meeting so people know that this is coming,” Flynn said.

She said the average time for approvals to be completed on a project like this one is about four months.

Monument’s downtown has seen some turnover in the past couple of years, Hayes said, but when businesses move out, the spaces don’t stay vacant for long.

The district has attracted some businesses that are second locations for flagships in Colorado Springs, she said.

The Trail’s End Taproom brought a self-pour concept that had proved popular at its Colorado Springs location when it moved into a Monument building at 252 Front St. that originally was a 19th century log cabin.

The owner unearthed the bones of the old building during renovations and made them a part of the business’ character.

Like the Springs location, Trail’s End and its outdoor patio have become gathering places. The business encourages people to come to Monument with events such as the Trail’s End Christmas Market, which the venue hosted the last weekend in October.

One of Monument’s newest businesses is Faery Grove, which sells one-of-a-kind, handcrafted candles, bath and body products, and home décor.

The shop, which had its grand opening Oct. 29-31, moved into a space in Front Street Square that previously was occupied by The French Ruffle Market, Hayes said.

Renew Beauty Bar, which offers skin-care services and products by appointment, is in a neighboring space in Front Street Square that previously housed Bee’s Knees Embroidery.

“We haven’t had anything downtown that was beauty-oriented, so a lot of the people that shop here love that,” Hayes said.

Lolley’s Ice Cream at 175 Second St. has become a signature business even though it’s less than a year old, she said.

Founded by a Monument family that creates ice cream, pastries and other goodies from scratch, and housed in a 145-year-old house that the owners gutted and renovated, Lolley’s had a soft opening at the beginning of this year and a grand opening in late Spring.

Besides these newer faces, legacy businesses located downtown continue to be popular with Tri-Lakes residents and visitors, Hayes said.

The Coffee Cup Café has been a Front Street landmark for breakfast and lunch since 1978. Other legacy businesses include La Casa Fiesta New Mexican Restaurant at 230 Front St., which opened in 1957.

“Everybody remembers the Mexican food restaurant on the corner with a huge patio. I hear that a lot from people,” Hayes said.

Covered Treasures, at 105 Second St., has survived as an independent bookstore when many others in its niche have gone out of business.

Tommie Plank and a partner opened Covered Treasures in 1993.

“We’ve been through some hardships like any business has,” she said. Over the years, the store has seen a nighttime robbery and a flood caused by a burst pipe that destroyed the main room and all of its inventory.

The flood turned out to be something of a blessing in disguise, as it spurred renovations that expanded the store.

“And of course, we’ve been through COVID with everybody else,” she said. “But through all of these hardships, our community has grown to support the bookstore more and more.”

Plank has heard from many of her patrons that they redeveloped their reading habits during the pandemic. The store also carries games, puzzles and greeting cards, which have been popular items during the past 18 months.

Last year, the store enjoyed a 30 percent increase in sales over 2019, Plank said, and is on track this year to increase “by a considerable amount.”

“It’s partly because people are staying home,” she said, but also because the store has a large and loyal customer base.

“It’s important to know your clientele, especially when it comes to their reading preferences,” she said. “Our clientele is a little bit more conservative than some of the independent bookstores across the country, in larger cities especially. We’re very sensitive to that.”

The store closed to in-person shopping in March and early April last year, but Plank and her employees offered curbside pickup and home deliveries for Monument’s dedicated readers. The shop still offers those services.

“We get some of the proceeds for our sales, and it’s been very good for us,” Plank said.

One of her two employees spends about an hour a week updating the store’s Bookpage listings.

Plank said the changes she’s witnessed in downtown Monument “reflect the growth we’re seeing in our community. We have a lot of younger people, some with families, moving into the area. So the demographics have changed a little bit over the years.”

She looks forward to the new project in town and thinks it will be helpful to her store and downtown as a whole.

“A walkable downtown is really important,” she said. “That is exactly what small downtowns like ours thrive on. It’s a perfect addition to our town.”

Will you spend more on gifts this holiday season than last?