Skip to main content
You have permission to edit this article.
Edit
Home
News
Profiles
Opinion
Local Events
Awards
Book of Lists
About Us
Digital Edition
Subscribe
And More...
Share This
1 of 5 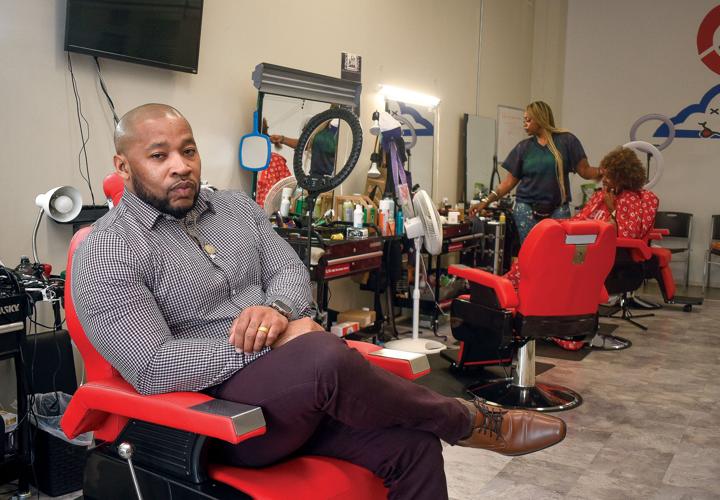 CommunityWorks leader Juaquin Mobley is getting barbers formal training in mental health support so they can build on the trust and connection they have with their clients, and offer better care. 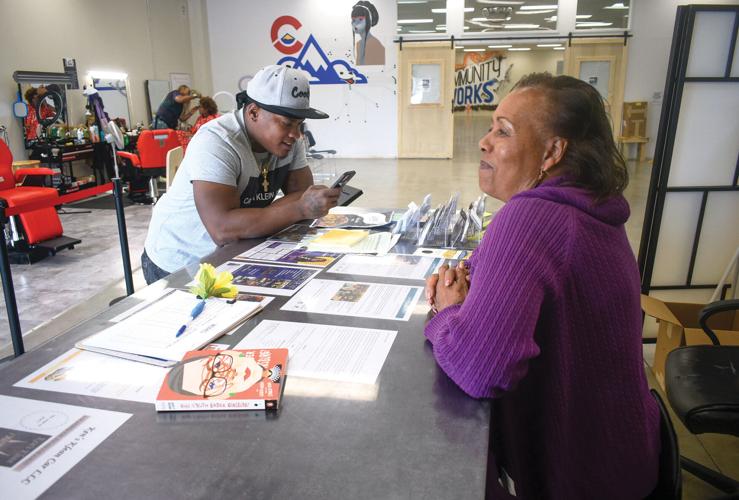 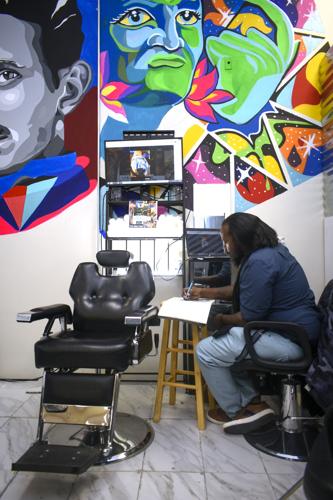 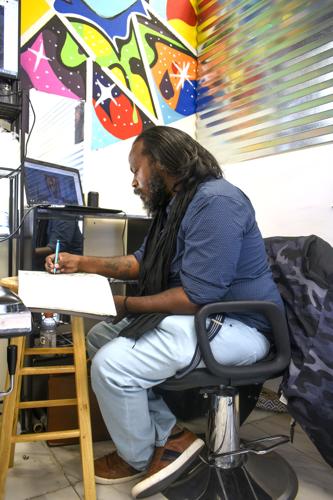 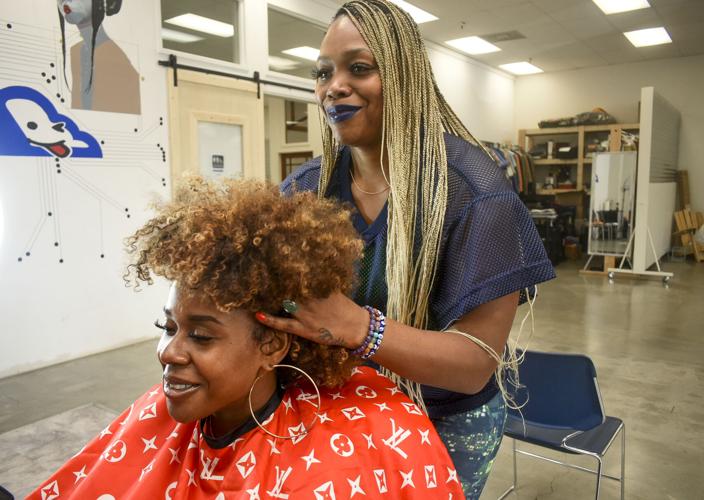 When Juaquin Mobley’s family immigrated to America from the Dominican Republic to build a life in New York City, the first place they went for support was the barbershop. Historically, the barbershop has been somewhere to get a haircut, yes — but more importantly it’s served as a refuge, a space to speak freely; a place for connection, solidarity, community.

The barbershop’s deeper meaning and role in society “is something that I hold near and dear to my heart,” says Mobley, the senior vice president of innovation and strategy at CommunityWorks. “I just wanted to refine it a little bit.”

So Mobley’s latest effort is to give the barbers at CommunityWorks formal training in mental health support, so they can offer clients a deeper level of care.

Mobley describes CommunityWorks’ barbershop as the organization’s “port of entry” — its barbers are already involved in peer recovery coaching, assessing their clients’ needs and potentially directing them to CommunityWorks programs that help them get job instruction and placement, life skills training, professional clothing, transportation, business connections and other support.

“One thing I learned growing up in the barbershop, whether I was here or in New York, was that everything that happened in our community — the good, the bad, the ugly — it comes through the barbershop,” Mobley said during a Black Chamber of Commerce tour of CommunityWorks’ Springs headquarters. “What we wanted to do was leverage that in a positive way.”

Since 1995, CommunityWorks has been helping people with barriers to employment — and those who have been justice-involved — to find meaningful work. The nonprofit has locations in Colorado Springs, Denver, Aurora and Pueblo, where clients come for mentorship and personalized coaching, and to connect with services, training and therapy.

“I wanted to formalize it...,” says Mobley. “Whether it’s peer recovery, motivational interviewing or providing restorative feedback. And shockingly, the majority of barbers are already doing that. They just don’t know it.”

By receiving formal training, barbers are not only bolstering their skill set, they’re better supporting their clients — and in turn, their community.

In some locations, CommunityWorks centers have barbershops; in others, there are tattoo shops and clothing boutiques. “We want to create an experience for our participants,” says Smith. “Number one, make them feel comfortable. Because we know that if you look good, you feel good.”

Salons and barbershops usually charge independent contractors booth rent anywhere from $200 to $400+ a month. At CommunityWorks there’s no fee, which significantly boosts barbers’ take-home earnings. Barbers can charge regular clients, but are asked to give five free haircuts a week to CommunityWorks participants.

Nail technicians, hair stylists, barbers — these are service professionals who tend to cultivate rapport and trust with their clients.

While the peer recovery training is available to all service providers at CommunityWorks, the organization has identified barbers as particularly good candidates. “These are people that we kind of confide in,” Smith explained. “They become informal counselors.

“When you have that trust, you’re willing to communicate.”

“When you have that trust, you’re willing to communicate. Because if you really think about it, some of the things that we go through in life, we just really need an outlet.”

And peer-to-peer mentorship in judgment-free zones can have powerful outcomes. “Thinking about my upbringing, if I just had somebody speaking life into my life, I may have made some different decisions,” said Smith, who was released from prison in January after serving 24 years. “Coming from the neighborhood that I came from ... it’s all negative. You’re not going to have a person coming up to you saying, ‘Hey, go to college, go to school, go do this.’ Or they’ll tell you to go there — but there’s no motivation behind it. ...

“You need people to believe in you, and I think that’s one of the things I forgot in prison. I didn’t believe in myself until somebody else stepped up to believe in me. And to this day, that person is still a mentor in my life.”

“On a personal level,” said Mobley, “I feel the reason why I went to prison was because of lack of resources. Having a formalized process, and a safe place for these resources to be gathered, is important. Some of the people from our most vulnerable part of the city and community, they should have a place to go to acquire these resources. What you do with them is on you. But I think it’s key in keeping a lot of our kids, as well as even adults, out of the streets.”

In fact, a recent Harvard research study titled “Barbers as Mental Health, Suicide Prevention, and Interpersonal Violence Gatekeepers in the Community: Perspectives from People of Color in a Racially Divided America during the COVID-19 Pandemic” confirmed the “importance of supporting barbers of color in underserved communities.”

Marginalized groups, especially people of color, tend to experience socioeconomic disparities, industry discrimination and stigma — all of which can prevent people from seeking or receiving mental health care.

According to “Brother, You’re On My Mind,” a tool kit produced by the National Institute on Minority Health and Health Disparities in partnership with Omega Psi Phi Fraternity, Inc., Black adults are 20 percent more likely to report serious psychological distress than their white counterparts. Black adults living below the poverty line are two to three times more likely to report serious distress than those not living in poverty.

Providing barbers with mental health training is by no means a novel concept; it’s a program that’s been adopted in barbershops across the country. But now CommunityWorks is officially joining the ranks. The nonprofit has recognized it as a powerful community tool and is taking steps to implement it.

Bianca Bean, the site director for the Colorado Springs location, said three barbers and the case management team (herself included) completed the training over the summer.

Mobley says people with lived experience make effective peer recovery specialists. “[Lived experience] gives you validity, right?” he said. “It’s different than just going to school, getting a certificate and being able to facilitate it. You have to have gone through it, so you are able to speak to the nuances.” Incorporate motivational interviewing, and Mobley calls it a “recipe for success.”

CommunityWorks has been footing the bill thus far, but some organizations have expressed interest in getting involved, Mobley said: “It’s turning into a partnership and collaboration because everybody’s seeing the greater good.”

Smith says the nonprofit has also received a Medicaid grant, a portion of which could be allocated for barber set-up. “If the person that [the barber’s] talking to is on Medicaid, they could actually get up to [an extra] $15 for talking to that person,” says Smith, noting that this interaction would have to be documented and verified. (The team has yet to decide on a dollar amount.)

This additional revenue stream could serve as an incentive to participate in the training.

While some details, like funding and compensation, are still being fleshed out, Mobley, Smith and the rest of the CommunityWorks team are optimistic about the initiative’s potential.

“I think a lot of times, we feel like we can [either] be a do-gooder and volunteer and help the community, or we can be in businesses and be a capitalist,” said Mobley. “So what I’m trying to do is bridge the gap and show them that they can be a conscious capitalist. It’s a social enterprise.

“I want to show them that, yeah, you’re doing good work and I’m going to compensate you for it.”