Skip to main content
You are the owner of this article.
Edit Article Add New Article
You have permission to edit this article.
Edit
Home
News
Profiles
Opinion
Local Events
Awards
Book of Lists
About Us
Digital Edition
Subscribe
And More...
Share This
1 of 4 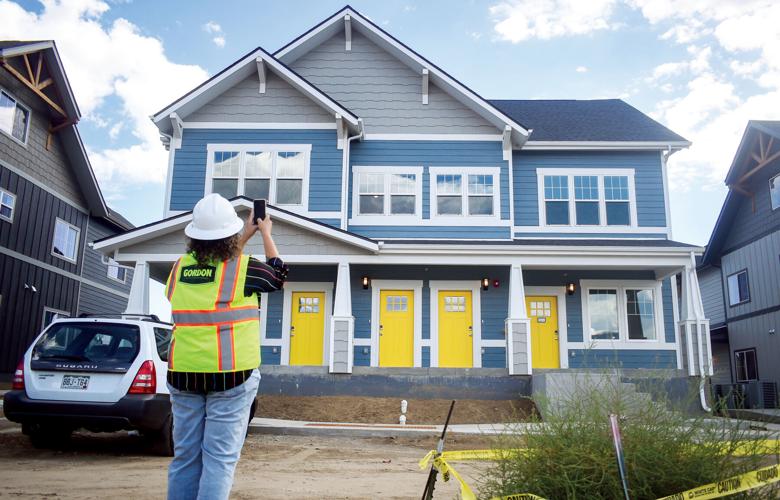 Jessica Lawler, assistant property manager for Places Management LLC, takes a photo of the Mosaica apartments, which are close to seeing their first residents. 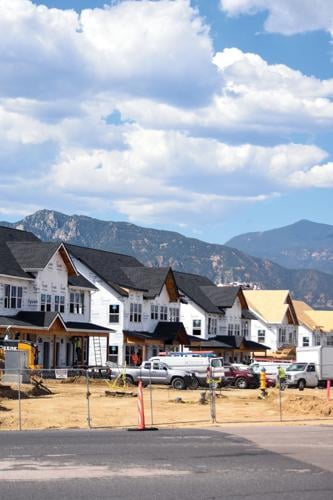 Developer Darsey Nicklasson has a wait list for prospective tenants who want to move into the 15 units in the first three buildings of the Mosaica community. 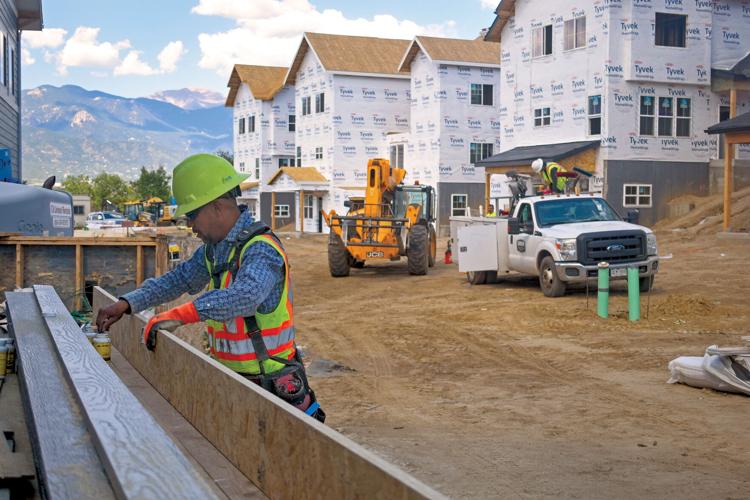 Work on the first three buildings at the Mosaica apartment complex is expected to wind up in about six weeks, barring any delays. 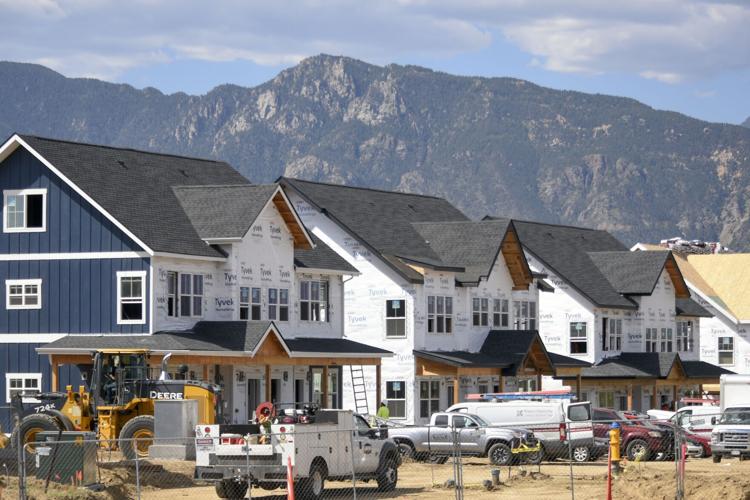 Within the next six weeks, Darsey Nicklasson hopes to realize a goal she’s been working toward for the past two years — moving the first residents into Mosaica, her apartment project in Southeast Colorado Springs.

It’s been a long, difficult process.

“We’re finally getting closer,” she said. “It feels like we have just been dragging and clawing our way through everything.”

Nicklasson, founder and president of Places Management, has a waiting list for families who want to move into the 15 apartments in the first three Mosaica buildings, but hasn’t started accepting applications yet.

“Once we do, and we make a commitment to somebody that we’ll have an apartment on a certain date, and it gets pushed back again, that puts all of us in a difficult position,” she said.

That statement — and the weary sigh with it — reflect the delays and obstacles Nicklasson has faced for many months: huge increases in construction costs and materials — 30-50 percent across the board; labor shortages — and “those who do come to work might only have one or two years of experience, which makes it more challenging;” repeated delays in

delivery of materials such as concrete; and increased interest rates on her financing — “we started with 3½ percent; now we’re at 6 percent.

“I like what I do,” she said, “and I like my industry, but it is just wearing us down.”

The same delays and obstacles have affected projects that are being financed with low income housing tax credits, and it’s only through perseverance and creativity that they’re going ahead.

Nicklasson is an innovator who launched an apartment renaissance in Downtown Colorado Springs with her very first project — Blue Dot Place — and followed it up with the equally successful Casa Mundi.

Those buildings were small, elite and designed to appeal to well-heeled young renters who wanted an urban lifestyle.

Mosaica, at 2155 Hancock Expressway, was a different kind of project from the start. Its 223 units were envisioned as a neighborhood for median-income working families — a mosaic that reflects the community’s diversity.

Nicklasson put together a group of investors to purchase the 20-acre property on which Mosaica sits. Plans included 48 buildings with no more than five apartments each and a mix of sizes from studios to three-bedroom units. Several four-bedroom units are planned to accommodate multigenerational families.

Walkways wind past front porches; common areas function as backyards where kids can play. A neighborhood center and playground anchor the community.

Nicklasson’s intention was to keep rents as low as possible ­— she initially envisioned about $1,500 a month on average.

Rents haven’t been set yet, but from her first projections, Nicklasson said, “we’re probably looking at 45 percent increases, because that’s what the cost increases have been. The interest rates alone will increase costs by $300,000-$400,000.

“We’re pushing forward because our community needs housing,” she said. “If we stop, and there’s even less supply that comes on the market, it just compounds and makes things worse.

“We’re already in the stages with Mosaica where we’re all in on construction, and we’re fully financed on Kaleidos,” she said. “We will continue to do the best that we can for the community in terms of rents. We will still create a great neighborhood to live in, and we will contribute to the Southeast in many other ways by being a local owner and local management company.”

The project includes a commercial component along Hancock Expressway that will be an opportunity for local businesses.

“We don’t know what that will be,” Nicklasson said. “The only thing I’ve committed to the community is that we will not put in a fast-food restaurant.”

“That is a completely different business plan,” she said. “I don’t have experience in doing that type of project. They are complicated, and they take years to get done, which would add more years to what we’re already experiencing. So when we were putting the project together, I did not feel that I had the capacity to take on something very large and new like that.”

Other projects in Southeast Colorado Springs are being financed with state and federal low-income tax credits.

Projects representing nearly 1,000 units are under construction, have been awarded tax credits or have applied for tax credits in Southeast, she said.

Ground was broken in late April on the four-story, 77-unit Village at Solid Rock, a project that stems from the generosity of the Solid Rock Christian Center. The church formed the Solid Rock Community Development Corp. and partnered with Commonwealth Development on the project.

Pastor Ben Anderson, senior pastor at the church and executive director of the development corporation, said groundwork is being completed at the site.

The development will house renters earning between 30 and 60 percent of the area median income in one-, two- and three-bedroom units.

Greccio Housing will manage the development, which is expected to be completed in summer 2023.

DBG secured a $22 million Freddie Mac loan for the project and received funding from the El Paso County Housing Authority and the Colorado Investment Fund.

Additional financing included 4 percent low income housing tax credits, which restrict the rents at the property for renters at 30, 60 and 70 percent of area median income.

The project, which will consist of three four-story buildings with one-, two- and three-bedroom units, is scheduled for completion in March 2023.

Construction is scheduled to begin this fall on Paloma Gardens, a 75-unit, low-income senior housing project on the site of the former Laurel Manor Care Center at 920 S. Chelton Road by Virginia-based Volunteers of America National Services.

The organization already operates the 50-unit Laurel Gardens apartments, which will be remodeled and become part of Paloma Gardens.

GPR Partners, composed of Greccio Housing, Partners in Housing and Rocky Mountain Community Land Trust, has applied for tax credits to rehabilitate 24 units and build an additional 168 units at Bentley Commons on 7 acres off Hancock Expressway near Astrozon Boulevard.

Construction on Draper Commons, a 280-unit affordable multifamily project in two buildings on a 6.44-acre site at East Fountain Boulevard and South Wahsatch Avenue, is also expected to commence this fall.

“Every project has been challenged to keep things affordable,” said Lee Patke, executive director of Greccio Housing. “Not only did we see more than double-digit increases in the cost of construction, but we also saw some softening in the tax credit pricing that investors were offering, which reduced our equity in deals.

“At Bentley Commons, we’ve been able to keep it at the exact same level of affordability that we intended from the beginning, but it’s taken some creative funding and problem solving to get it done.”

The Bentley Commons partners originally applied for 4 percent federal tax credits but “because of these challenges, we decided to hold off, go into the state round of tax credits and try to get more equity into the deal to cover the increasing costs,” Patke said. While some developers have decided to delay projects or revise rent structures, “like a lot of developers in town, we have stayed committed to whatever we had to do to make sure that we were serving those very lowest of income earners in our community.”

What’s also needed, he said, is “creativity and investment by people that have resources that maybe don’t have to depend on low-income housing tax credits to get these things done.”

Sunderlin said low income housing tax credits awarded from the state can subsidize up to 70 percent of the costs of construction.

The city of Colorado Springs has developed several programs to incentivize new projects, she said.

The most recent, a refund of city sales and use taxes on construction materials for qualified affordable housing projects, was approved by City Council July 26 and went into effect Aug. 22.

Developers also can apply for rebates of various development charges including fees for land use review, planning, public works and Colorado Springs Utilities.

Developers can receive $100,000 or more in rebates of development charges after closing, Sunderlin said, depending on their scores on factors including number of affordable units, units reserved for special-needs tenants and veterans, and whether a project exceeds building code standards related to energy efficiency and water conservation.

“CSU has also given Community Development and my housing team $2 million for utility connection rebates,” she said.

“Affordable housing projects are seeing huge gaps because of the increased costs of construction and labor, and interest rates,” Sunderlin said. “Being able to rebate a couple of hundred thousand dollars at the end of a project is filling a huge need right now.”