Skip to main content
You are the owner of this article.
Edit Article Add New Article
You have permission to edit this article.
Edit
Home
News
Profiles
Opinion
Local Events
Awards
Book of Lists
About Us
Digital Edition
Subscribe
And More...
Share This
1 of 3 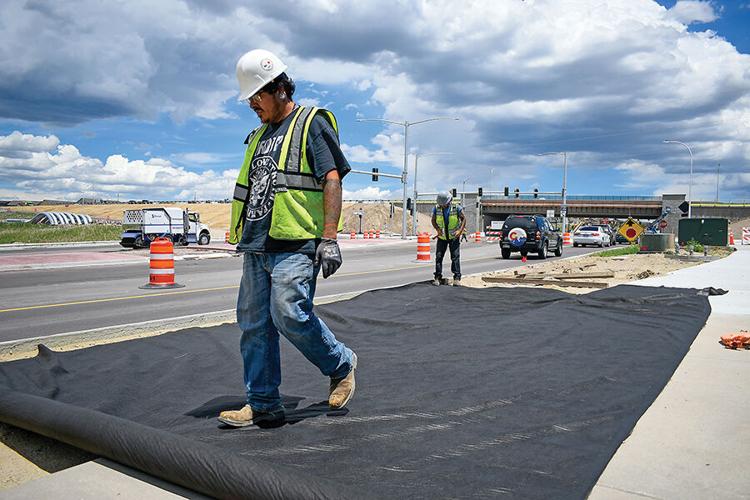 The diverging diamond intersection design, like the one found at Interstate 25 and Fillmore Street, will be making its way east.

A rendering of the Powers Boulevard and Research Parkway interchange.

Growth on Colorado Springs’ Eastside is increasing pressure on the roadways that serve the area, including Powers Boulevard and Marksheffel Road.

With construction of a diverging diamond intersection at Powers and Research Parkway, the Colorado Department of Transportation has already begun the first of several improvement projects that are envisioned in the next 10 years.

The ultimate vision for Powers is an expressway, but “we are a long way from that,” said Andy Stecklein, CDOT professional engineer. “At this point, we’re essentially trying to put fires out and identifying areas that are in high need of improvement.”

Those areas include the Powers-Research Parkway intersection, a $44 million project that is due for completion in November; and a similar interchange at Powers and Airport Road, which is among CDOT’s priorities for the next decade.

Construction of the Colorado Highway 21 (Powers Boulevard) bridge was underway the week of July 2. Crews also were working on constructing Research Parkway under the bridge.

CDOT also is keeping a close eye on development for the need to improve additional intersections.

While Powers has always been envisioned as Colorado Springs’ major north-south thoroughfare on the Eastside, the city also is looking at maintenance of and improvements to feeder roads including North Carefree Circle, Dublin Boulevard and Platte Avenue, said Dan Sexton, principal planner for the city of Colorado Springs.

The city is also thinking about other possible north-south routes, such as Marksheffel Road, that could take some of the pressure off Powers. Work on widening Marksheffel from North Carefree to Dublin is scheduled to begin in 2025, said Travis Easton, Colorado Springs public works director.

The huge development potential of the Banning-Lewis Ranch is driving this scrutiny, Sexton said.

The sprawling Banning-Lewis cattle ranch once consisted of more than 30,000 acres — an area about one-fourth the total size of Colorado Springs.

The city annexed 24,000 acres in 1988, and the rest came in after Norwood Development Group purchased the property in 2014.

Of the 30,000-plus acres, current development “probably is in single-digit percentages right now,” Sexton said.

“Oakwood Homes has been the largest developer, but Norwood is just kicking off their entitlements for the Freestyle North project, which is about 600 acres of their holdings,” he said.

According to its website, Norwood is in ongoing entitlement and design stages on an 18,000-acre portion of the ranch and is planning to break ground this year. The guiding framework for the development outlines the potential for more than 70,000 housing units and 20 million square feet of retail, office, industrial and other nonresidential space.

While the vast majority of development potential exists in Banning-Lewis, there are other parcels that could be developed or redeveloped, Sexton said.

The large unincorporated area of Cimarron Hills is one such parcel, “but there are some hurdles and obstacles for further development of that area based on services and infrastructure that exists today,” he said.

Amara, a 6,500-acre planned community that straddles El Paso County and Fountain, could add 9,500 residential units. The developer, La Plata Communities, is seeking to de-annex the Fountain parcel and annex both parcels into Colorado Springs.

The buildout of Peak Innovation Park also has the potential to add vehicle trips to Powers, Sexton said.

“The state demographer has clearly stated that Colorado Springs, as a growing metropolitan center in the Front Range, is slated to be the largest city by 2045, if not earlier,” he said. “That is predicated upon these developments coming into the city that will bring additional residential population as well as diversity of commercial and industrial uses.”

The Powers-Research Parkway project is replacing the at-grade intersection with a diverging diamond interchange and overpass that will allow traffic on Powers to flow unimpeded by traffic signals.

Traffic accessing Powers from Research Parkway will be streamlined by the elimination of left-turn lanes against oncoming traffic and by allowing free-flowing turns when entering or exiting Powers.

The project, which began in June 2021, also includes repaving of 3 miles of Powers and enhancements for pedestrians and bicyclists.

The traffic pattern is similar to the diverging diamond intersection at Interstate 25 and Fillmore Street, said Yun Han, CDOT resident engineer/professional engineer, who also worked on that intersection.

A $45 million project to construct a diverging diamond intersection and Powers and Airport Road is among CDOT’s priorities the next decade, Stecklein said. Upgrades to that intersection would help facilitate traffic for Peterson Space Force Base.

“That interchange is currently being designed,” he said. “We’re hoping to have that advertised for construction really quickly in 2023 and to have shovels in the ground in that calendar year.”

Another project is envisioned at Powers and Milton Proby Parkway.

CDOT is looking closely at that project because of growth in Peak Innovation Park and the needs of the Colorado Springs Airport, but “that project is in its infancy,” Stecklein said. “We’re in the process of putting things together so we can hire a consultant to help us on the design of that improvement, but we don’t have construction funding for that.”

Stecklein noted significant movement on projects in development that are not CDOT-led but which benefit the highway.

“But that terminates at Voyager Parkway, leaving us a large gap in between Voyager and Highway 83,” he said.

Spanning that gap is not among CDOT’s priorities, he said, but the Copper Ridge Metro District and city of Colorado Springs are partnering with CDOT to complete the connection.

“They don’t have enough funds in the metro district coffers to complete the construction, but they do have enough to start some design work,” Stecklein said.

The Pikes Peak Rural Transportation Authority board of directors has drafted a ballot question for the Nov. 8 general election that would extend the portion of the PPRTA 1-cent sales tax dedicated for transportation capital improvements for 10 years.

If voters approve, some of those funds could finance the extension of Powers from Highway 83 to Voyager, Stecklein said.

CDOT is partnering with El Paso County, the town of Fountain and others on the South Powers Planning Environmental and Linkages study, which seeks to determine at a concept level what Powers could look like in the future — for example, if there were a need to expand the road to south I-25, Stecklein said.

“We are following the progression we typically follow when doing large-scale improvements,” he said. “You have to start with what’s feasible, then you have to identify alternatives and advance into a full-study mode” that takes into account the development of planned communities in and around the area and the need for integrating and connecting them in a logical web.

At the recommended alternatives stage, there will be public involvement, Stecklein said.

In 2019, CDOT embarked on a tour of every county in the state to gather input from the public on transportation priorities, said Michelle Peulen, CDOT communications manager for Region 2 (Southeastern Colorado).

Out of that came CDOT’s 10-year plan, which prioritizes projects throughout the state.

“We have a lot of needs statewide, and we have to look at those needs on an equal playing field,” Peulen said.

Improvements to Marksheffel Road also could be financed if the PPRTA tax extension is approved this fall.

“Part of the issue with the Marksheffel piece is that a lot of development has been occurring, but parts of Marksheffel are in the county,” Easton said.

The road jogs in and out of the county, and the city has already reached an agreement with the Board of El Paso County Commissioners to annex the county segments.

“We’re working on getting the deeds for that and going through title work to get it into the city,” Easton said.

However, “we’re not waiting for it to come into the city,” he said. “We’re working on engineering plans while we’re getting the deeds and title work done.”

Engineering plans for widening Marksheffel from North Carefree to Dublin Boulevard have reached 90 percent completion, according to the city’s website.

Future plans for Marksheffel also include a tie-in with Black Forest Road and a bridge over Cottonwood Creek.

“The schedule is to be determined depending on when development goes in up there,” Easton said.

“We consider the timing very critical in our land-use decisionmaking process,” Sexton said.

“As a planning department — and I think public works would certainly empathize — is that we don’t want to build roads to the middle of nowhere. Then the city’s left holding on to those roads and maintaining those very large and overbuilt right of ways before the actual demand is there.”

Although the continuing preference for “people getting into their vehicles to drive to one or multiple locations” is the biggest contributing element to congestion on Powers,” multimodal transportation hasn’t been forgotten in the city’s planning, Sexton said.

ConnectCOS, the city’s 20-year vision plan for transportation and mobility, considers other forms of transit and will take into account future travel technology, needs and use patterns.

Ridership demand for Mountain Metropolitan Transit service currently runs to Stetson Hills and Tutt boulevards at the northern end and the airport at the southern end, Easton said.

“But we’re always looking at that, and coordinating that with CDOT as well,” he said.