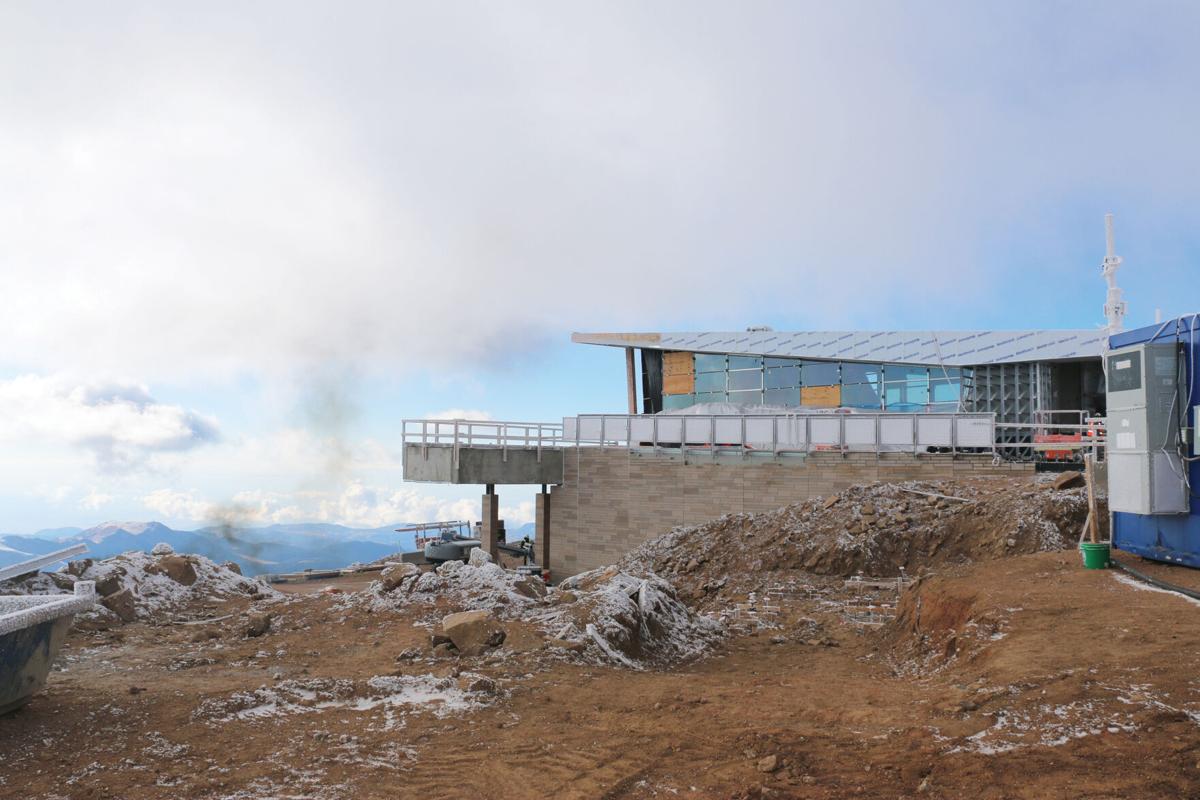 The 38,000-square-foot Summit Visitor Center is scheduled for a June 24 opening. And yes, there will be donuts. 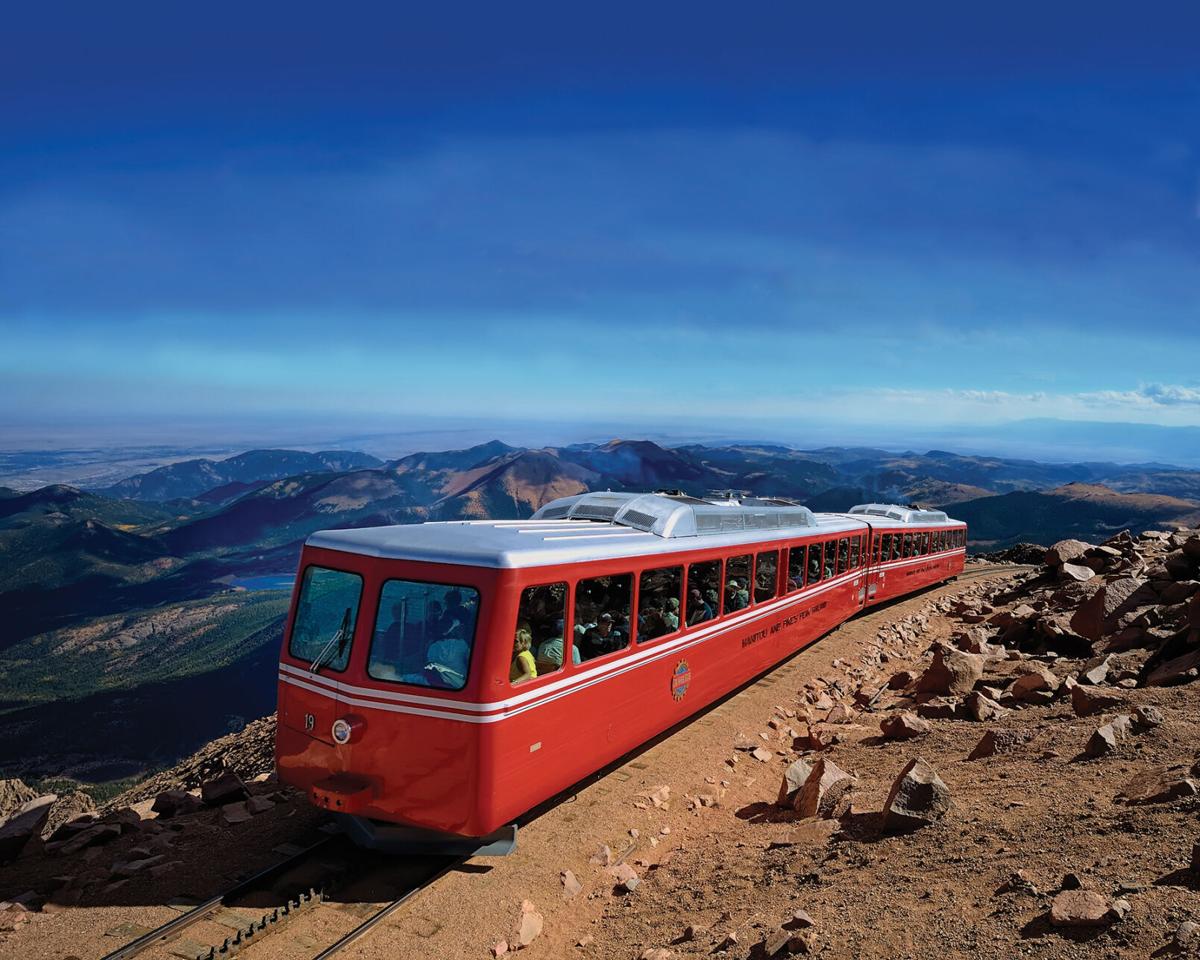 The opening of the cog and the completion of the Summit Visitor Center will add to the city’s amenities.

A pair of iconic Pikes Peak tourism draws are on track to reopen.

The Broadmoor Manitou and Pikes Peak Railway, closed since October 2017 for a $100 million overhaul, will have a soft opening May 20.

“There won’t be much fanfare that day,” Assistant General Manager Ted Johnson said, “other than, maybe amongst our employees, having a little celebration that we’re done with the project and we’re putting paying customers on the train.”

Cog trains will run May 20-23 and will resume with a full, seven-days-a-week schedule May 27, Johnson said.

Adverse weather this summer and late spring snowstorms slowed the finishing work on the project. When it snows a few inches in the Springs, the peak can get 15-20 inches, making construction impossible.

“We’ve had a lot of days when they couldn’t get up to the summit to work,” Glavan said.

The official grand opening for both the cog railway and the Summit Visitor Center will be June 30.

“I think between the railway and the new visitor center, Pikes Peak is really going to be a gem that everybody will want to come to,” Johnson said.

The trip up Pikes Peak on the cog railway will run the same route as it has for the past 130 years, but the visitor experience will be very different, Johnson said.

The railway’s depot was built to accommodate about 20 people per day. Prior to its closure for renovations about 300,000 people a year were taking the train ride.

While the depot’s exterior retains its 1890s historical look, the gift shop and bathrooms have been upgraded, a second train platform has been added, and a new overhead walkway gives visitors a place to enjoy the mountain views and take pictures.

Two entry and exit points were added to facilitate the flow of passengers so the depot feels less crowded.

“We didn’t have room to expand because of where we sit on the hillside,” Johnson said. “So we had to work within the footprint that we had.”

The cog purchased three new trains from Stadler, a Swiss company that is the world’s only manufacturer of cog railway equipment. Two of the trains have been delivered; the third will arrive May 14.

In addition to the new trains, the cog refurbished four of its existing trains.

“We’re going from having the capability of having 2,300 or so seats per day to having 3,600 available seats per day,” Johnson said. “We never came close to that number in the past, but it does give us room to grow our business.”

And passengers should have a much more comfortable ride. The old wood seats that had passengers squirming half way up the mountain have been replaced with modern, cloth-covered models. Unlike the old ones, the new trains are heated.

“It will be a much more comfortable ride in the wintertime,” Johnson said.

The cog mechanism, all of the tracks and all of the ties were replaced and upgraded along the railway’s entire 9-mile line. Crushed rock ballast was added along the track to add stability and divert water runoff.

Before the upgrade, the trains ran on two cog rails; the new system has one steel cog rail that is thicker than the two pieces of the old system combined, Johnson said.

The upgrade, which was recommended by the railway’s Swiss designer, “is instantly better than what we had, because of the standards they had to be built to,” he said. “We had an excellent safety record before we closed the railway, but the whole upgrade was an improvement in the overall safety of the railway.”

“We’ve really moved into e-ticketing,” he said. “Beforehand, you could make an online reservation, but you still had to pick up a physical ticket at the ticket office. Now, once you buy your tickets online, they get delivered right to your email, right to your cell phone. We think that will help the people flow as well.”

“Parking is very tight in Manitou, and we don’t have enough parking to accommodate our customers,” Johnson said. “One of the key things we are going to be doing is texting our customers who have prepurchased a ticket and saying, ‘There is or there is not parking at our parking lot, so go park at Hiawatha Gardens [a city parking lot], or go park at our offsite parking location.’”

Johnson said the offsite location, which will be outside Manitou Springs, is still being finalized. Passengers will be shuttled from there to the depot.

Passengers who park at Hiawatha Gardens can take a free shuttle operated by Manitou Springs and Mountain Metropolitan Transit from the lot to the railway.

“Our big joke was that we built the summit house around the donut machine.”

The cog had planned an earlier soft opening but pushed it back because the demolition of the former summit house was taking longer than anticipated.

“Out of concerns for safety, we’ve agreed to hold off until May 20,” Johnson said.

“We are just beyond excited to start welcoming people back to one of the most unique experiences in the whole country,” he said.

Glavan anticipates that the 38,000-square-foot visitor center might not be open to visitors when the first cog trains ascend to the summit later this month, but passengers will be able to take in views from the north overlook.

When it does open, visitors will have an extraordinary experience, Glavan said.

“On the highway side, what you’ll see is the vestibule entrance,” he said. “The building has been constructed to go into the mountain. The roof is at the highway level, so the entire roof basically is part of an observation deck.”

When visitors come through the vestibule, they will view a huge expanse of glass on the south side of the building that looks toward Mount Rosa.

A grand staircase leads down to the main level, where the interpretive area is located.

“That’s a great feature that was not in the [original] summit house,” Glavan said.

A touchscreen wall will allow visitors to enter their names and where they’re from; the screen will respond with the distance from their hometown to the summit. Through a special app, they’ll be able to upload photos from their phones.

“I think people are going to love that,” Glavan said.

The dining and retail areas and restrooms are spacious and modern. Food service catered by Aramark will be available. An outdoor terrace will accommodate diners when the weather is good.

Outside, a PermaTrak concrete boardwalk system leads to overlooks in all four directions.

It took some creativity to assure that made-onsite donuts — a beloved feature of the previous summit house — would still be available, Glavan said.

Since one of the city’s goals was to have the building certified for the Living Building Challenge — a step higher than LEED certification — the design team found a ventless donut machine that contains, recycles and filters the air, eliminating the need for energy-sucking exhaust hoods.

The ventless machine was too big to fit through the visitor center’s doorframes and had to be brought in through the large window openings.

“GE Johnson Construction Co. had to bring it in early on and have it sit there until the kitchen was ready,” Glavan said. “Our big joke was that we built the summit house around the donut machine.”

Glavan said he expects finish detail work on the exterior of the building and elsewhere on the site to continue through the summer.

The city will be encouraging visitors to park at the Devil’s Playground lots and take  a shuttle to the summit, he said. The goal is to complete most of the parking areas at the summit by the end of June.

“We’ll have about 165 spaces for parking at the summit once it’s finished,” he said.

Local tourism promoters expect that as people continue to get vaccinated, they will be ready to travel. With the reopening of the cog and visitor center, the Pikes Peak region will have an abundance of resources to lure visitors.

“Not only will the cog and Summit Visitor Center bring out-of-state visitors, but they will also inspire the return of locals and in-state visitors who haven’t experienced the train or been to the summit in years,” he said.

Visit COS is launching the Ultimate Pikes Peak Challenge, a new promotion on the Visit COS website that focuses on the mountain, Communications Manager Alexea Veneracion said.

“It’ll have 25 different challenges like fishing at the South Slope Recreation Area or taking a bike tour down Pikes Peak — just all the adventures and activities in addition to the cog and the Summit Visitor Center,” she said. “By crossing off different challenges, participants will be able to earn these really cute merit badges. It’ll be a fun way to engage people with the mountain again.”

“We haven’t received specific numbers for last year, but our goal is to have numbers that get closer to those 2019 numbers,” she said. “We expect to be a lot closer to that this year, but probably not quite there until the next year or two after this.”

Manitou Springs Chamber of Commerce Director Leslie Lewis said the chamber also is featuring the cog and visitor center opening in its advertising and promotions.

“In a lot of cases, when people are coming to Colorado, and coming to the Pikes Peak region in particular, that’s part of their plan,” Lewis said. “The cog puts people in the lodging in Manitou.

“I think that the [U.S.] Olympic [and Paralympic] Museum, particularly in a year of Olympics, is going to be huge,” she said. “Talk about a first-class wow factor. So I just think that the Pikes Peak region is coming back into its own.”