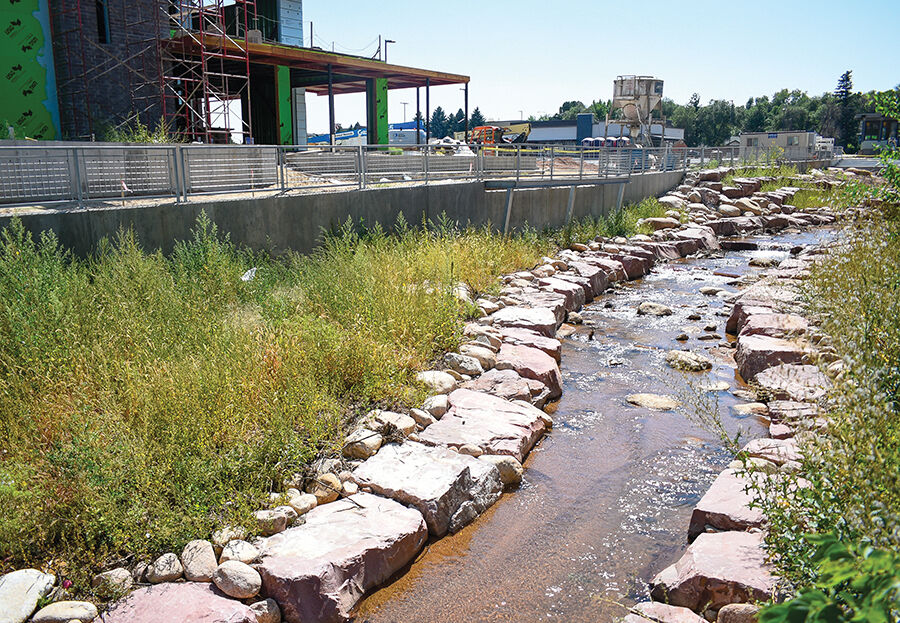 Cheyenne Creek flows past the long-awaited Creekwalk shopping center. Set to open next month, the project aims to lift the South Nevada Avenue corridor out of poverty and blight. 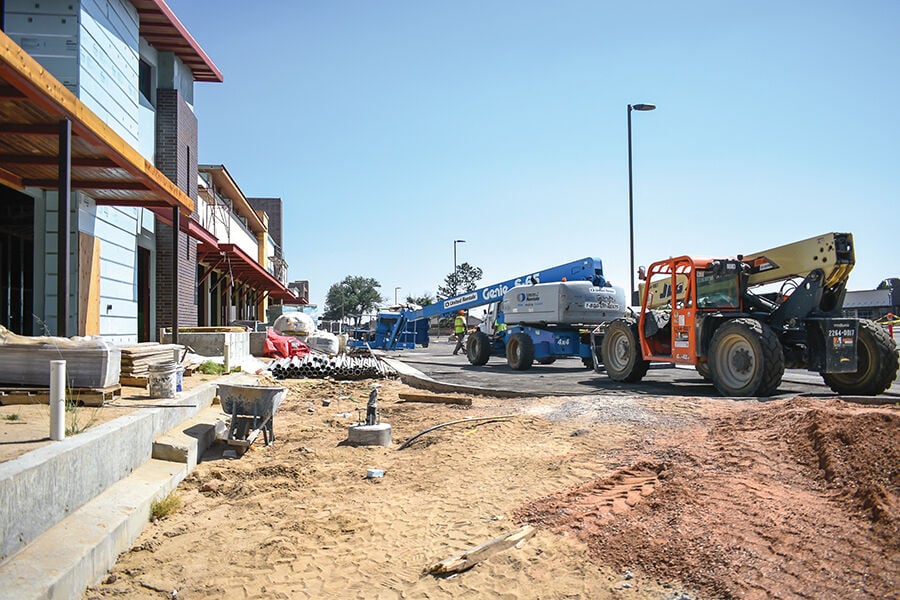 After years of planning, negotiating and infrastructure work, the Creekwalk shopping center on South Nevada Avenue is preparing for soft openings for several tenants in October. 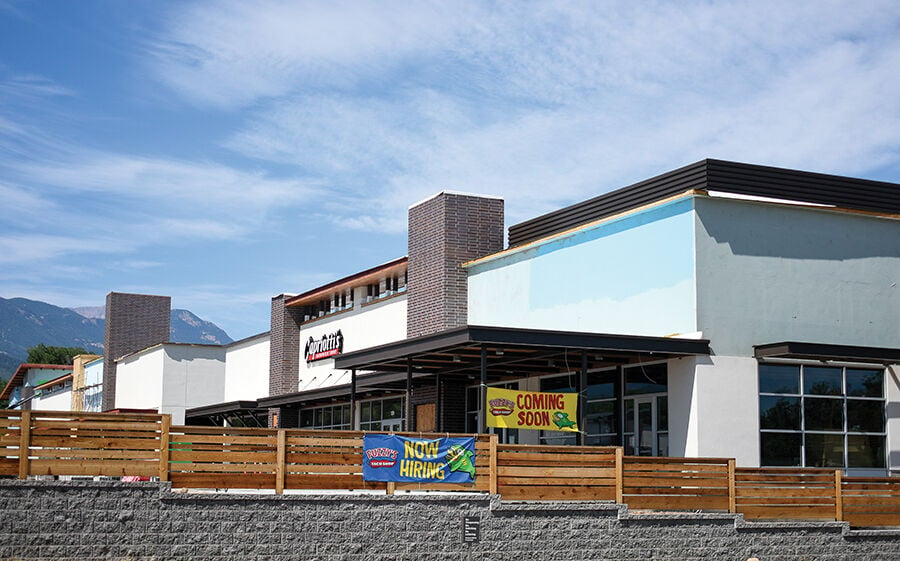 Shops and restaurants at Creekwalk will border Cheyenne Creek.

Southwest Colorado Springs has been a part of Danny Mientka’s life for decades.

A Colorado Springs native, he grew up hanging out on South Nevada Avenue and remembers dining at the first Mexican restaurant there.

In those days, South Nevada was a very different place to the strip of motels and dilapidated properties it later became.

“It’s really been disappointing to watch the decay of South Nevada over 50 years,” Mientka said. “Watching vagrants and others take control of our corridor — it’s motivated me to take it back for our community.”

Mientka, owner of The Equity Group, is one of three developers who are transforming the South Nevada corridor.

His project, the 8-acre Creekwalk shopping center, is one of the key pieces of the South Nevada urban renewal area. After six years of planning, negotiating, delays, obstacles and, of course, a pandemic, Creekwalk will open for business next month alongside 700 refurbished feet of Cheyenne Creek.

“We anticipate mid-October openings for at least four of those five tenants,” Mientka said.

Several other tenants, including MOD Pizza and Pacific Dental Services, are scheduled to open in the first quarter of 2022.

“Construction is costing more and taking longer than pre-COVID,” Mientka said, “and so necessarily some of these tenants will lag their openings.”

Sprouts Farmers Market has executed a lease and is set to open a store in 2022 in Creekwalk North, the second phase of the project, between St. Elmo and Ramona avenues.

“Sprouts is a significant vote of confidence for the South Nevada urban renewal plan,” Mientka said. “They have looked at this location in this corridor since 2005. We’ve entertained bringing them a couple of different times but quite frankly, the corridor wasn’t ready for them. And now they have agreed that it is.”

Several other tenants “are seriously taking a look at Creekwalk,” he said, “and we expect to make more announcements before the end of the year.”

When the project is full, Mientka expects to have 15-17 tenants.

In place of the seedy structures on the east side of Nevada Avenue that were razed to make way for the development will be shops and restaurants that overlook the creek and serve patrons on outdoor patios.

An amphitheater that steps down to the edge of the creek will host concerts and performances.

Patrons will stroll or bike along a creekside trail, and four kinetic sculptures by renowned Cheyenne Canyon artist Starr Kempf will engage them as they take a break from shopping or wait for a restaurant table.

Creekwalk is a centerpiece of the South Nevada Avenue corridor in an urban renewal district that spans 99 acres between the avenue and South Tejon Street.

The urban renewal zone was created in 2015, but Mientka had been working on the project for years before that.

Mientka had to acquire 26 parcels from 17 separate owners to put together the property for Creekwalk.

“That has been the No. 1 challenge so far,” he said. “Not every project needs 26 parcels, but it’s what was necessary to get the economic scale. To get all those pieces of the puzzle pulled together took a lot of time, a lot of patience and a lot of resources, and there’s a lot of risk capital that is at play when you are assembling a parcel that’s large enough for this.”

Public infrastructure improvements are the foundation of any successful URA plan, and Mientka has invested more than $4 million in public improvements.

While the developers’ work did not include telecommunications upgrades, Mientka said CenturyLink and Comcast came in to improve their infrastructure.

Extensive work was done on the once trash-choked creek. “Essentially, this was a concrete-lined channel that just conveyed the creek through this area,” he said. “We took the east side of the concrete channel down and then brought in this extraordinary granite rock, which is found in our quarries south of town, and set those as a boundary to channel the water in an attractive way.”

The floor and walls of the channel were stabilized to control the flow of the water.

“The real beauty of the creek will come to life next March, April and May, when we bring in trees and other species of plants along both sides of the channel,” Mientka said.

The utility work also has been challenging.

“Everything was overhead, everything was undersized, and everything was pretty ancient,” he said. “You don’t exactly know how much spaghetti is under the ground, so we’ve encountered significant utility infrastructure costs.”

Mientka expects Creekwalk to create a lot of jobs and serve as a symbol of change in the corridor.

“We had many squatters and drug abusers in those buildings as we were buying them,” he said. “I think this is a statement that this isn’t a place for them anymore. … Our choice is to invest and take risks and bring public improvements and essentially take back our corridor for everyone’s benefit.”

Ivywild Development LLC, owned by Sam and Kathy Guadagnoli, is working in another of the URA’s four sub-areas, called silos.

One of its most highly anticipated ventures is the 159-room Marriott Tribute hotel at 1619 S. Tejon St.

“We’re doing the underground utilities and storm and water quality systems, and we hope to start the foundation at the end of October,” said Ray O’Sullivan, development manager for Ivywild Development.

He anticipates completion of the hotel by the first quarter of 2023.

Construction also is underway on a Mexican restaurant at 1515 S. Tejon St., and about 27 townhomes are being built just south of Edelweiss German Restaurant on Ramona. O’Sullivan said he expects the townhomes to be completed in 12 to 15 months.

Two large market-rate apartment projects at Brookside and Navajo streets and at Metzler Place and St. Elmo Avenue are in the design phase, he said.

Several other projects are complete, including a small retail strip along South Nevada where Smashburger is located; Prime 25, an upscale steakhouse at 1625 S. Tejon St.; and Canyon Creek Townhomes, a 19-unit development on Cascade Avenue.

“Sprouts is a significant vote of confidence for the South Nevada urban renewal plan.”

Besides street improvements, sidewalks and landscaping, relocating utilities and undergrounding power lines along the roadways that the company’s properties front, “we have a commitment to complete the majority of the bike trail and creek improvements from St. Elmo to Brookside,” he said.

“The new retail is proving to be very successful and getting very competitive rents,” he said. “The residential products we’ve built have been very successful. … It’s pretty self-evident that Ivywild went from very rough to one of the most desirable communities in the city. And as more and more stores and restaurants open along the creek, I think it’s going to continue to improve pretty markedly.”

The fourth silo is still undeveloped.

The South Nevada URA was one of the most complex of the city’s 12 urban renewal areas, Walker said.

“Typically, when we do URA agreements, we do them with one master developer,” he said. “In this instance, we have three developers. There’s also properties within this URA that none of these developers control. And it’s a very large URA with a state highway running through it.”

Many of the properties on the east side of South Nevada across from Creekwalk were pledged into the fourth silo, he said.

“That added layers of complexity,” Walker said. “Now some of those owners, maybe they want more money for their property, and maybe it’s a little more challenging to develop.”

He thinks that once the west side of the street is completed and the hotel is finished, “there will be renewed interest in the east side of the street. There’s been people who have reached out that I bet are wanting to develop once they see how things shake out in the corridor.”

Developers also have shown interest in building more residential projects in the area, he said.

The city closely reviews projects in urban renewal districts to make sure adequate infrastructure is in place, said Ryan Tefertiller, urban planning manager with the city’s planning and development department.

“The South Nevada corridor had failing sidewalks and lacked pedestrian ramps,” but the streetscape, sidewalks and other infrastructure improvements the developers are putting in “are far beyond the city minimum,” Tefertiller said. “They have done a great job with the creek; what was blighted is now an asset to the area.”

Tefertiller thinks that the projects underway on South Nevada will generate additional interest in other areas of South Nevada.

“I have had early-level discussions about the possibilities of converting older motel properties into apartments,” he said.

Nothing would please Mientka more than to see Creekwalk become the catalyst for more change between his project and Downtown.

“Our philosophy is that by laying the foundation of public improvements and in retail concentrations on the west side, we create a stronger and stronger environment for retailers looking to be in the corridor and encourage more opportunities for more development,” he said.

“Being able to play a role in creating change and helping to revitalize this corridor — it’s personal.”