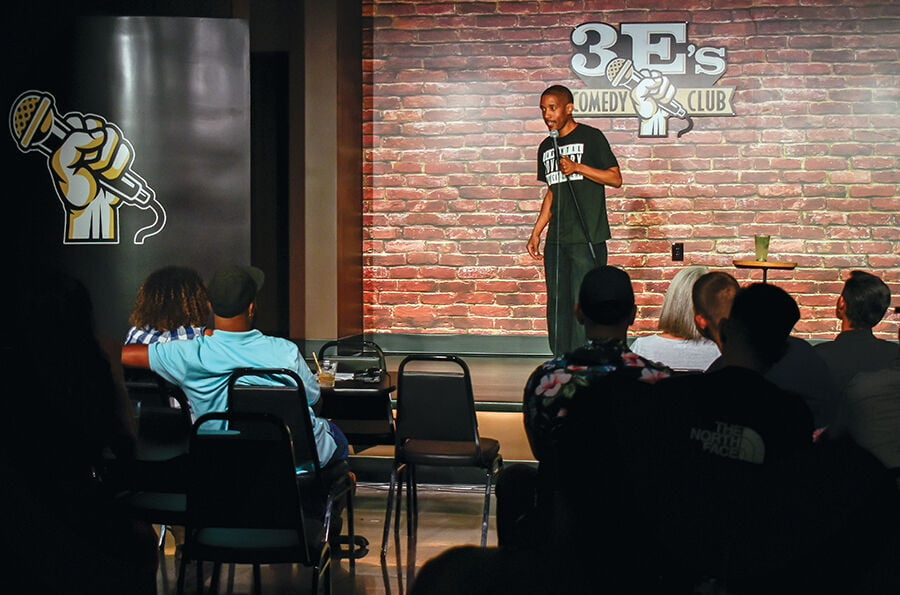 Anthony Crawford, a comedian from Denver, performs at 3E’s Comedy Club in Downtown Colorado Springs. The club provides opportunities for up-and-coming comics to open for headliners like Crawford. 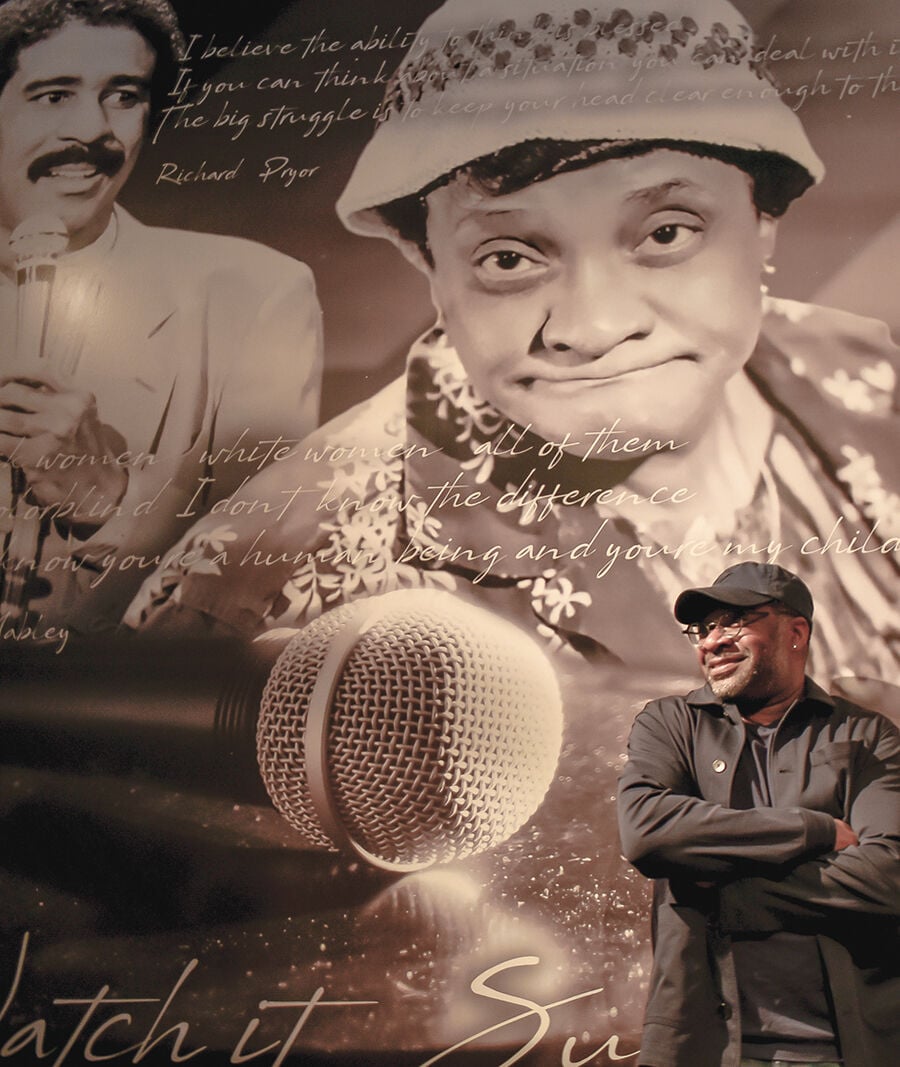 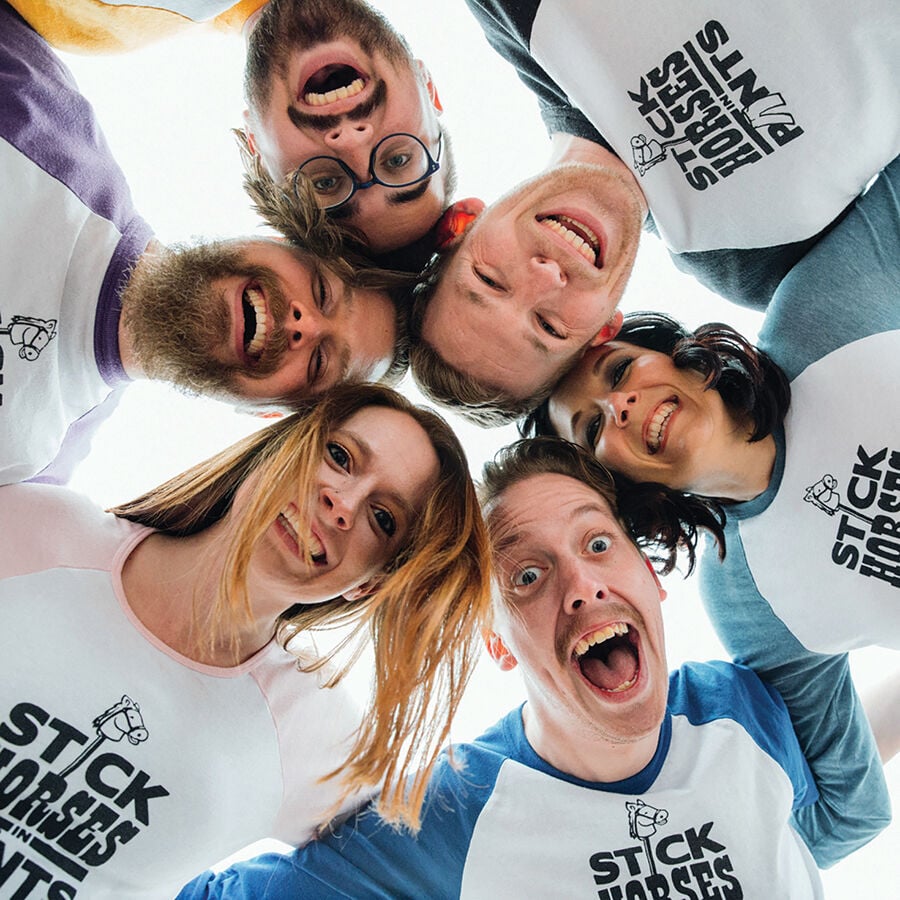 If we ever needed laughter, we need it now.

In the time of COVID, “laughing is infectious,” said Jim Jackson, executive director/clown at the Millibo Art Theatre, where comedy plays a huge role in the venue’s productions. “Because of all that’s going on, we have to seek outlets where there are people viewing things in a funny way and putting it out there.”

Comedy in Colorado Springs is a small but growing slice of the entertainment sector.

Established comedians get booked at the Pikes Peak Center and Loonees Comedy Corner, which was the only club devoted to comedy for a couple of decades. But now there’s a new comedy club in town.

Entrepreneur Eric Phillips recently opened 3E’s Comedy Club in Bancorp Plaza on South Nevada Avenue — a location in the midst of the city’s burgeoning Downtown, and thinks Colorado Springs has grown to the point where two comedy clubs can survive.

“We have people living Downtown, which we haven’t done before,” Phillips said. He hopes to build 3E’s into a venue that attracts locals and visitors, and also is a place where up-and-coming comedians can polish their acts.

The local comedy scene also includes several comedy troupes that perform at the clubs and other venues, bars like Oskar Blues that offer comedy open mic nights, and a couple of places where comedy improv classes are offered.

The city even has a school for comedy. United Comedy Academy, which offers a six-week improv course, presents classes and showcases its graduates at 3E’s.

There’s room for humor in the workplace as well. Meggan Hyde, a member of an improv comedy troupe called Stick Horses with Pants, gallops into corporate settings to do training and team building.

Improv, and comedy as a whole, is about being in the moment, Hyde said.

“That’s what people need, because we’ve been living in such fear about what’s going to happen next,” she said.

Phillips spent 14 years in the U.S. Army and landed in Colorado Springs after deployments in the Persian Gulf, Bosnia and Kosovo.

When he left the service, he went to work for the federal government and has helped with economic development and business opportunities through the Small Business Administration.

But he’s wanted to open a comedy club and build on the skills he gained in the 1990s as a promoter of comedy events.

When he found the Downtown venue, he knew it was the right location. But the timing was less than fortunate.

Phillips signed a lease on the property in late 2019 and was working to put 3E’s together when COVID-19 reared its ugly head.

“I didn’t pay it any attention at first,” he said. “I’m down at the building, and it’s March, April, and nobody’s outside, everybody’s locked down. Then I was like, ‘OK, I might be in trouble here.’”

Phillips made some changes in his preparations, adding UV lights, spacing tables farther apart and putting in Plexiglas screens.

“Ordering things came in slower,” he said. “There weren’t a lot of vendors to work with. But it’s something that I really wanted to do and that the city needed, so we just kept moving.”

3E’s — named for Eric and his two sons, Ethan and Eyan — opened in September 2020, then closed for a couple of months, reopening in January.

Because he works for the Small Business Administration, Phillips wasn’t eligible for a government loan, but he kept the club going by hosting business meet-ups and networking groups and bringing in comedians with local followings. He’s been partnering with other businesses, including restaurants, to offer joint deals for patrons and help get the word out about 3E’s.

He also promotes budding comics with an open mic night on Wednesdays and a stand-up, improv showcase Thursdays during which the audience dictates the subject matter.

Now open every afternoon and evening except Sunday, Phillips has 10 part-time employees and believes he’s in the right place to become a gathering spot for a growing number of Downtown residents.

“Every city has to have a comedy club downtown,” he said, adding that people moving here and visiting from bigger cities expect to find a comedy venue in the heart of town.

Phillips said the venue serves bar food; he’d planned dinner service but put that off because of COVID.

“We might bring it back next year,” he said. “We want to have a dinner and show package on Saturday. But we want to get that fan base coming in a little more before we do that. Hopefully, in the fall and winter, people will want to come out.”

Phillips has paired with The Gold Room, the jazz and blues venue across the street from 3E’s.

“We would like Nevada Avenue to be the place for live entertainment,” he said.

“Comedy is a big part of all we do” at Millibo, Jackson said. The venue has hosted RiP Improv and presented comedy shows for children.

But it’s taken a big hit during the pandemic.

“We did some videos that got a lot of viewers,” Jackson said. That helped the theater’s visibility and generated community support.

“It’s humbling to think about all the support we got,” he said. Grants and loans from El Paso County and the state also helped keep the theater afloat.

“But there’s no substitute for in-person comedy,” Jackson said. So he and partner Birgitta DePree fenced in a side area of the property, built an outdoor stage, put in a tent and started presenting shows outdoors in June.

“We had custom rigging made for us in Denver so we could do circus shows outside,” he said. “We were able to do pretty nice shows, but it was so strange, because next door is a beautiful, 110-seat theater.”

All of the 18 shows staged in the outdoor space sold out, he said.

“Every city has to have a comedy club downtown.”

The Millibo will continue to stage outdoor shows this fall, including a cabaret show called Cabaret Under the Stars on Sept. 17, 18, 24 and 25, and possibly a Halloween family show.

Jackson hopes to present a two-person play inside the theater in October; “if we do, we will probably do what most small theaters are doing — require vaccination proof or a recent COVID test for tickets.”

But Jackson thinks the COVID situation is still too uncertain to open up the theater again, at least for a full season.

He hopes to see more venues where young comedians can serve their apprenticeships.

“That’s always been a big aspect of the comedy world,” he said. “If you don’t have that live experience, it’s hard to know how to generate material and what finds an audience.”

Jackson said he frequently gets questions from young performers who want to do improv, stand-up or musical comedy.

“We’ve noticed a real uptick in that over the last couple or three years,” he said.

COMEDY ON THE FLY

Stick Horses with Pants was founded 17 years ago and performed regularly at the Lon Chaney Theater and Funky Little Theater Company until the COVID shutdown, Hyde said. The six-member troupe’s most recent performance was at Cosmo’s Magic Theater.

Stick Horses does both short- and long-form improv.

The short form is like pop music, where participants engage in a three- or four-minute back-and-forth. The longer form is “where we make up a scene or sometimes a whole play,” Hyde said. “We’ve improvised musicals before, which are always really fun when we’re making up songs as we go.”

In either case, “we start with a central idea or an audience suggestion, and we do that all in the moment,” she said.

Although there are some tricks of the trade, they can be learned.

“It’s something anybody can do,” Hyde said.

Improv is not just about being funny, Hyde said, but it often works out that way.

“It’s about bringing your unique ideas to an environment where other people are bringing their unique ideas,” she said. “Because our brains are different, surprising things happen, and surprising, unexpected things are funny.”

The troupe derives its income from fees for classes and private shows. When it performs in public venues, the members usually get paid a contracted amount or split ticket revenue with the theater.

Stick Horses has been placing less emphasis on corporate training, but that training teaches skills that are important to business, like teamwork, listening and communication, through the lens of improv.

Hyde said the training can reinforce social skills that have been dormant during the pandemic.

She cites a case of a tech worker who would freeze up when asked to speak in a corporate setting.

“He started taking improv classes, and that helped him be able to talk without getting anxious,” she said.

Jackson and Phillips think the comedy sector will keep growing as the city grows.

“We want to build this community and bring some different people out that haven’t done comedy before, to work on that art, and maybe find a Dave Chappelle or a Seinfeld,” Phillips said. “There’s one out there. I know there is.”