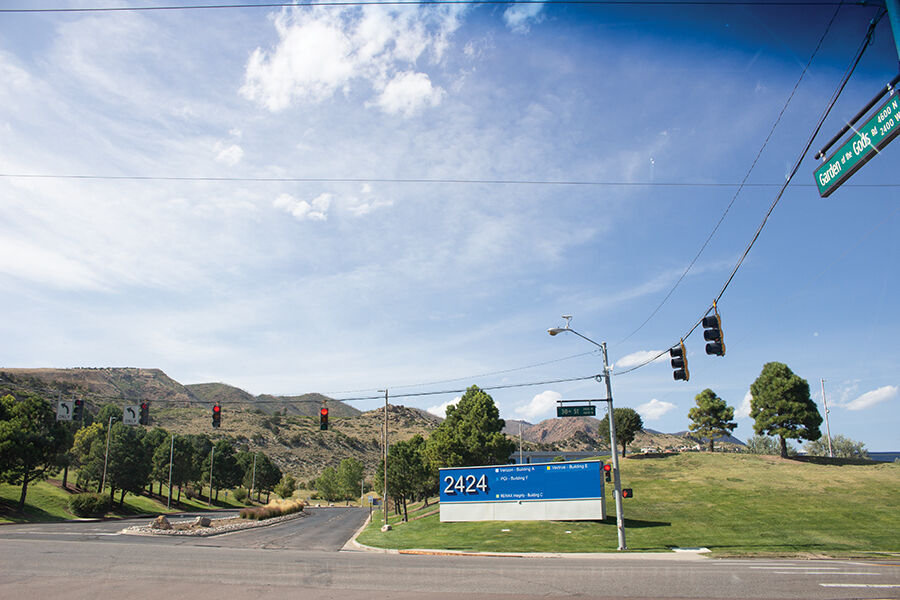 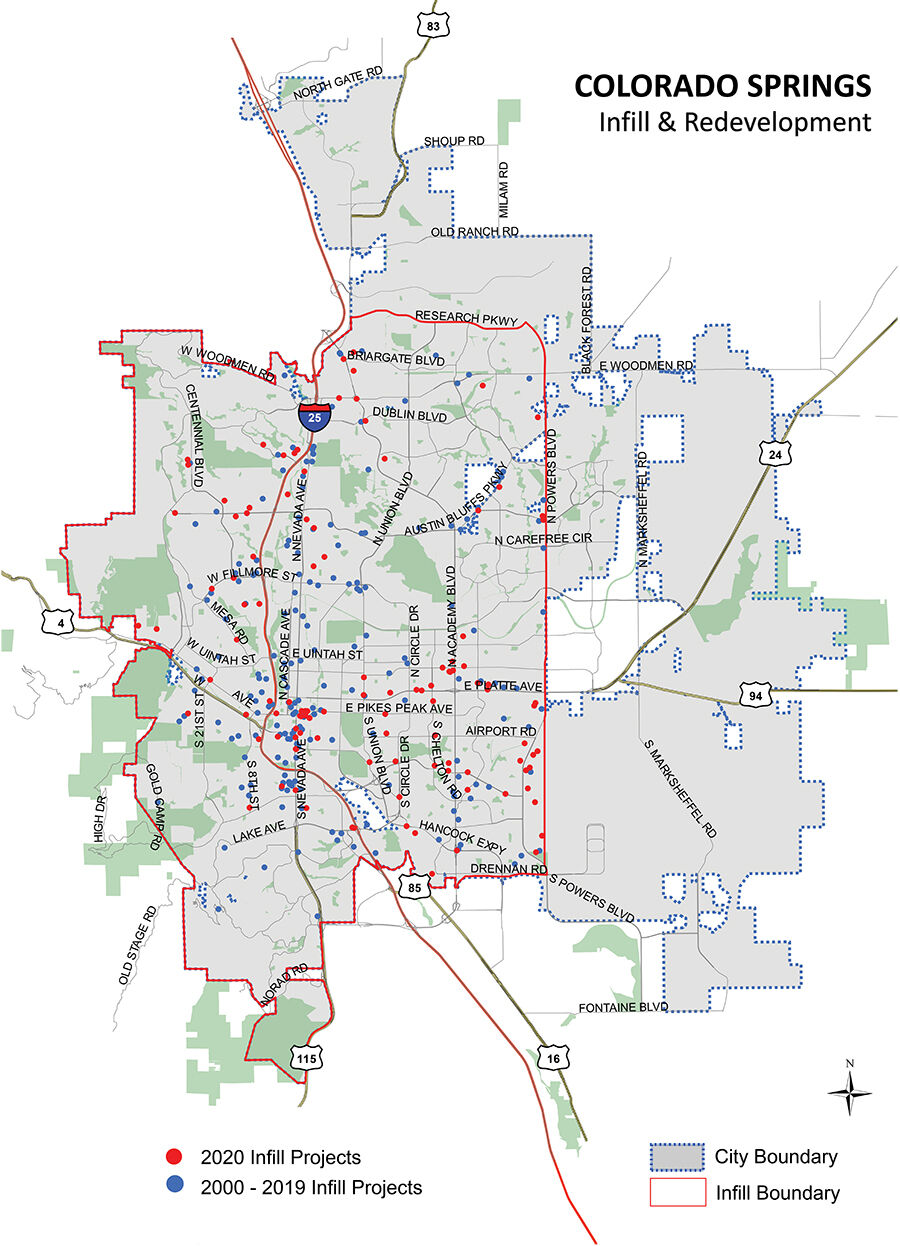 More than 6,000 Westside residents mobilized to fight a proposal for 420 apartments and additional commercial development at 2424 Garden of the Gods Road. And neighbors near a planned conversion of the Springs Ranch Golf Course into a 900-1,000 unit single-family and multifamily home development in northeast Colorado Springs organized their neighborhood associations to oppose it.

Both projects are examples of infill development, which can spark worries among adjacent homeowners about their property values, increased traffic, emergency services and school overcrowding.

But for every 2424 Garden of the Gods Road, there are 20 or 30 projects that don’t generate that kind of controversy, said Carl Schueler, comprehensive planning manager for the city of Colorado Springs.

More than 100 infill projects recently have been completed, are in progress, or are in the planning stages without the kind of opposition that makes headlines.

Infill basically is development within the boundaries of the city, said Peter Wysocki, the city’s planning and community development director, whereas greenfield development extends into parcels beyond the current city limits.

Infill is encouraged and prioritized in PlanCOS — the city’s comprehensive guide for the physical development of Colorado Springs over the next couple of decades — as a creative way to manage the city’s growth.

One of the biggest advantages of infill development is that it doesn’t require the city to build new roads, lay new water and sewer lines, or install new electric and gas utilities.

“We have 6,200 lane miles of roads, 2,500 miles of sidewalks and billions of dollars’ worth of utility infrastructure,” Schueler said, “and we want to be able to take advantage of those assets.

Infill development isn’t necessarily less expensive; there may be environmental or infrastructure challenges.

“Sometimes you have a higher land cost, and you do have more potential for citizen opposition,” Schueler said.

Infill development can prevent or address blight and can become a catalyst for neighborhood revitalization.

Ivywild School is an example of creative redevelopment of a property that was standing unused and might have deteriorated had it not been converted into a commercial and neighborhood center.

Ivywild’s success has spread throughout the neighborhood, raising property values, stimulating new commercial and residential development, and enhancing the businesses that were already there.

Infill development is taking place in a changing world and a city that is growing and will continue to grow, Wysocki said.

The current zoning code, developed in the 1970s and 1980s, reflects a philosophy of separate uses — single-family homes, multifamily residential and commercial development.

But today, vibrant neighborhoods are viewed as a mix of housing types and commercial activity, and PlanCOS, the city’s comprehensive plan, encourages mixed and integrated land uses.

The city’s zoning and subdivision ordinance is undergoing revision to align it with the goals set out in PlanCOS. The process, called RetoolCOS, aims to update development standards and modify restrictive zoning.

One of the changes RetoolCOS proposes is creating mixed-use zoning districts where commercial, retail, office and multifamily uses are allowed.

“So that means if someone buys a shopping center where retail is no longer supported, … maybe residential is the best use for that area,” Wysocki said.

Because infill development often is denser, the city also is looking at residential flex zoning, where development is regulated by density, not by lot size.

That kind of development is already happening, but it currently requires developers to get approval for a special zoning designation, Planned Unit Development.

The city is looking at how to incorporate these and similar design standards into the city code so developers don’t have to go through that process, Wysocki said.

Infill development, and a more flexible zoning approach, will help the city provide all types of housing, from traditional single-family homes to apartments in more urban areas, he said.

What parcels get developed, and where, is market driven.

“Infill is occurring on vacant land that is private property,” he said. “There should not be an expectation that a landowner buys a piece of property and keeps it undeveloped forever.”

That, perhaps, is what the residents of the neighborhoods around Springs Ranch Golf Course hoped, until they learned that the course was being acquired by Classic Homes and was to become Greenways at Sand Creek.

The owner was looking to sell because use of the 170-acre course had declined and it needed more maintenance and upgrading than he was able to afford.

Residents in the surrounding neighborhoods cherished their views of Pikes Peak across the property. Many were used to seeing wildlife on their walks along Sand Creek and regarded it as their open space. They formed a coalition of homeowners associations called Save Springs Ranch.

As a result of the discussions, Classic revised its plan by limiting the height of the single-family homes on the north end of the property. All of those homes will be ranch style, said Doug Stimple, Classic’s CEO.

Classic paid attention to the neighbors’ love for the natural features of the property and designed an extensive trail system.

“We eliminated development on the east side of the creek in an area that was otherwise developable and agreed to put that in a park … that will actually benefit not just our community but the surrounding communities,” Stimple said. “We were able to accommodate about 90 percent of what they wanted.”

Construction at Greenways at Sand Creek will begin next month, and Stimple expects the first homes to go on the market in early November.

“There are people who don’t believe that multifamily is compatible with single family detached in the same neighborhood,” he said. “I don’t agree with that, but to ignore it is foolish.”

“Essentially we put the higher density usage closer to where there are logical transitional breaks,” Stimple said.

“None of that is really supportable. In fact, when you densify, it tends to reduce crime. Generally, new construction elevates property values all around.

“I think as a general rule, the development community is aware of the challenges of infill development, but also where are the opportunities there,” Stimple said. “Those of us who are committed to doing it the right way, we generally want to take reasonable input and make reasonable accommodation and hopefully end up with a community that benefits the entire area and the community at large.”

It’s important to Darsey Nicklasson, president of DHN Development, that her infill projects are liked and accepted by the community.

“My face is on it,” said the developer of Blue Dot Place and Casa Mundi in Downtown Colorado Springs. “If I don’t do a good job, I won’t get to build again.”

Nicklasson’s latest focus is Southeast, where she is working on two projects.

One of them, Mosaica, will be a 223-unit multifamily community on 18.48 acres north of Hancock Expressway, with a mix of five- to six-unit buildings and single-unit cottages. The community will feature amenities like shared yard space and a central playground, walking and cycling paths, a dog run and a community center.

Nicklasson’s goal is to keep rents as low as possible. She originally projected average rents at $1,500 a month, but now expects rising construction costs will force that figure to climb.

Grading and infrastructure work is mostly completed at the Mosaica site, and foundations for the first three buildings have been finished. Nicklasson anticipates the first residences will be completed in late February or March.

When she found the property, Nicklasson recognized it was a great location — close to large employment centers like The Broadmoor, near Fort Carson and with easy access to the Colorado Springs Airport.

Neighbors of the proposed community requested a meeting after the development plan was submitted to the city, Nicklasson said.

“They definitely had some concerns when they heard that a piece of ground that had never been developed, straight across the road from them, was going to be developed for multifamily,” she said. “I think when they realized that the design of our buildings was actually very similar to the look and feel of their own homes, that it calmed down a lot of their fears.”

“One of the things I’ve heard is they need a place to reach out to the community,” Nicklasson said. “Not everybody can always get to where they provide services. But if they have a satellite office one day a week in our community center, maybe it’s easier for that person to get there.

“I just don’t have the stomach for being in a big controversy,” she said. “I try to develop for other people, for a community that I would like to live next to as well, because it’s my town. It’s your town. It’s our town.”