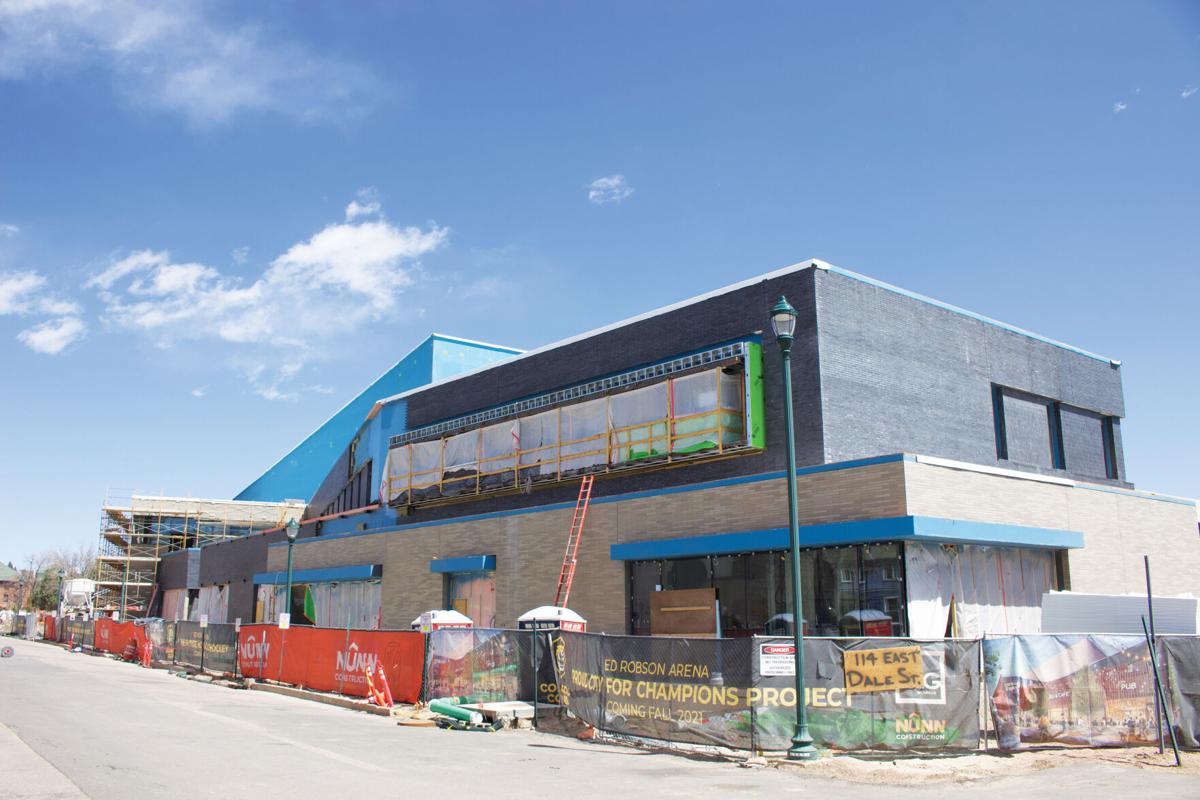 Robson Arena, the new home of the Colorado College Tigers Hockey team, is on track to open in mid-October for the 2021-22 season. 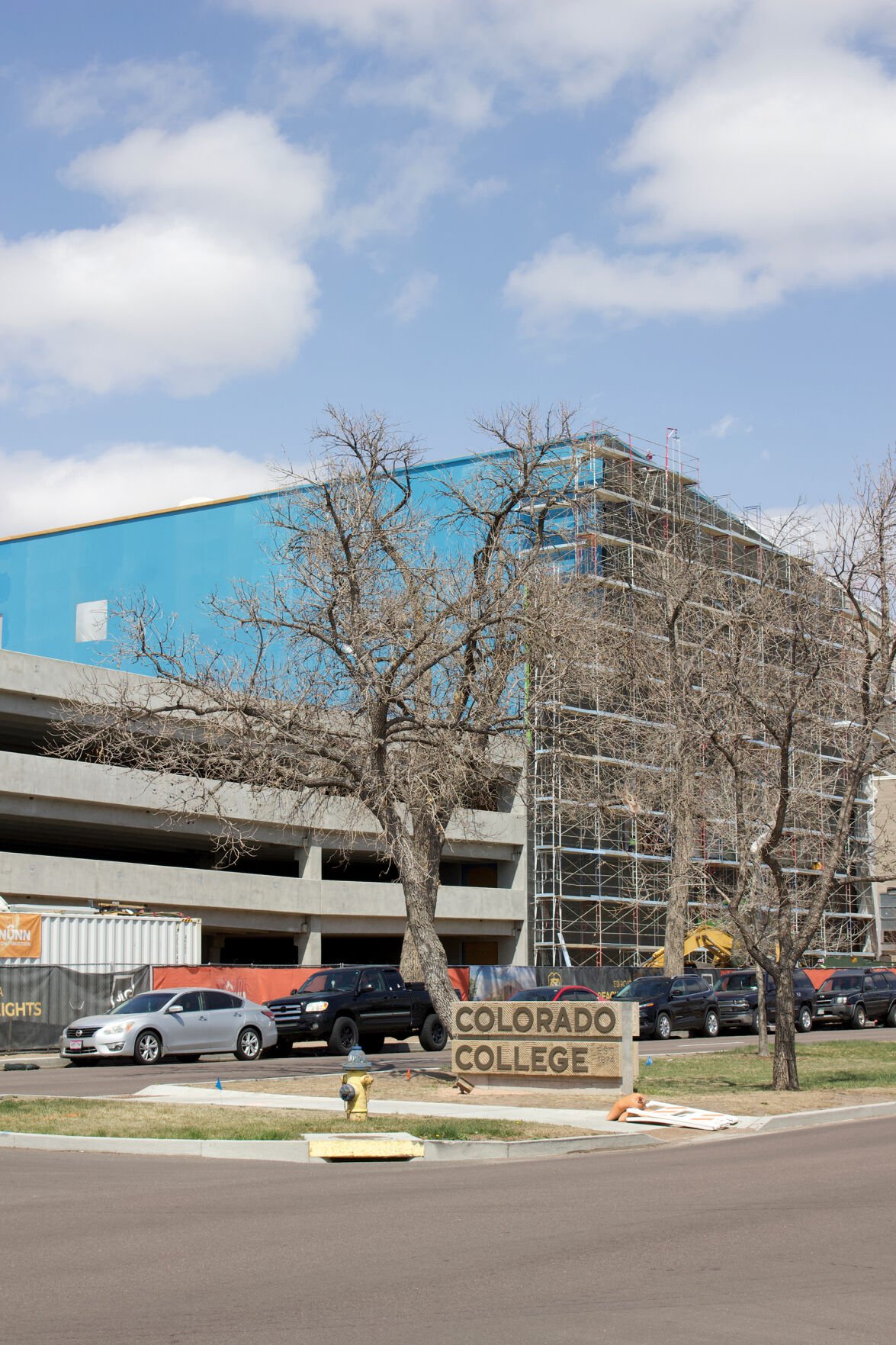 The 323-space parking garage at Robson Arena is ready for topping slabs.

Two of the five City for Champions venues — the U.S. Olympic & Paralympic Museum and Hall of Fame and the William J. Hybl Sports Medicine & Performance Center — are open for business and beginning to fulfill their purpose of attracting visitors to the Pikes Peak region.

Weidner Field is weeks away from its opening date, and construction of the Edward J. Robson Arena at Colorado College is about 80 percent complete.

The last of the City for Champions projects — the Air Force Academy Gateway Visitor Center — has been the most challenging to initiate. But according to its master developer, Dan Schnepf,  financing for the project is coming together and could be in place this summer.

“We are shovel-ready,” Schnepf said. “We could start construction tomorrow if we had the bond funds in place.”

Schnepf, an AFA graduate and founder of Matrix, a consulting engineering and design firm, formed Blue & Silver Development Partners to spearhead development of the complex. Groundbreaking was planned for April 1, 2020, until the COVID-19 pandemic caused the collapse of the bond market in March 2020.

But now, documents are being rewritten for $90 million in bid bonds for the visitor center and supporting infrastructure and about $210 million in hotel bonds.

“The problem is that they both have to go together,” Schnepf said, “so we’re a little beholden to the hotel bonds.”

The bonding market for hospitality projects has been poor, but Schnepf is seeing signs of recovery. A $535 million bonding effort for a Georgia hotel and convention center went to market about three weeks ago and was 16 times oversubscribed, he said, and a $700 million project in Brevard County, Florida, is coming up next month.

“We’re waiting to see how that one looks,” Schnepf said. If all goes well, he expects to take the AFA projects to the bond market early next quarter.

“C4C has already exceeded my expectations.”

The hotel will be owned initially by Provident Resources Group, a nonprofit organization that, among other missions, helps governments with difficult development projects that serve their citizens.

“After they get this thing amortized, they are going to give it to our Air Force Academy,” Schnepf said. “It will be a great asset for the Academy in perpetuity and will generate an immense amount of revenue. … Once the bonds are paid off, that revenue would be made available to the Academy.”

Provident is looking at two firms to design and build the hotel — a prominent local firm and a Denver firm that specializes in hotel construction — and will announce its selection within the next 30 days, Schnepf said.

The hotel and its 30,000-square-foot conference center will be designed specifically to meet the needs of the Air Force Academy and the north end of Colorado Springs.

“In the long run, it’s going to be great for our community as well,” Schnepf said.

The hotel will be operated by Greenwood Village-based CoralTree Hospitality, a provider of services to destination resort communities and lifestyle hotels. CoralTree is a wholly owned subsidiary of Lowe, a private real estate company.

The retail center will include “a standalone restaurant or two and a standalone coffee shop or two,” Schnepf said. “We have a lot of interest, plus we have four gas stations competing to put a service station on the retail site.”

The whole financing package for the development is quite complex and was put together by Schnepf and the city of Colorado Springs.

“As was originally and always planned, we are using a public finance approach that includes ad valorem taxing and TIFs, which are additional charges related to the project that would accrue to the business improvement district” that embraces the properties, Schnepf said.

Multiple taxing districts — including the city of Colorado Springs, School District 20, the Pikes Peak Library District, police, fire and a water district — “have deferred collection of their ad valorem taxes while the project is being built and for the purpose of bond retirement,” Schnepf said.

About 60 percent of the taxes collected for services and room rates at the hotel, as well as property taxes, will go toward paying back the bonds for the visitor center and infrastructure.

That’s why, “without the hotel, the project is not financeable,” he said.

Since the visitor center will serve as a welcome center to Colorado Springs as well as the Academy, the city has approved $2 million in Lodging and Automobile Rental Tax grant funding for the project and is considering an additional $800,000, he said.

“Of course, the Air Force is providing a tremendous amount of income for it — about $16 million in all,” Schnepf said.

As a City for Champions project, the visitor center was awarded $13.25 million in Regional Tourism Act funding.

“So there are a lot of stakeholders that are involved, and everybody’s very excited about the project going forward,” Schnepf said.

The visitor center, which Schnepf regards as the capstone of his career, is still on track for completion in 2023, despite COVID-19. He expects the hotel and office building to be finished in 2024 and the entire development to be done “some time in advance of 2025.”

The two projects that are already operating are drawing a lot of attention.

The Olympic & Paralympic Museum, which opened July 30, 2020, was voted the nation’s best new attraction of 2020 by USA TODAY’s 10Best Reader’s Choice and was nominated earlier this month for the publication’s 2021 best new museum award.

“We ended 2020 with good attendance, although not what was initially projected” before the pandemic, said Peter Maiurro, chief communications and business affairs officer.

But 2021 is off to a great start, and the museum, which is open seven days a week, is seeing a positive upward trend in attendance as the vaccines continue to roll out, he said.

“During spring break, we had several days with more than 500 visitors [each day],” he said.

Maiurro expects time ticketing to continue indefinitely, but the museum is taking walk-ups for the first available time slot.

More than two dozen special events are scheduled or in the pipeline for the next few months, and the museum is planning significant programming around the Tokyo Olympic and Paralympic Games in July and August.

The Hybl Center, a partnership between UCCS and Centura Health, has been serving primarily local athletes and patients, but Executive Director Steve Johnson expects more out-of-state clients and patients as COVID restrictions loosen.

Johnson has conducted tours for prospective students and their parents, who have been wowed by the facility.

Once UCCS fully opens, hopefully in the fall, he anticipates that 1,200 students per day will populate the building.

Bill Lueck, director of new development for Centura Health and co-executive director of the Hybl Center, said its medical clinics — especially the orthopedic and physical therapy services — are extremely busy.

“We continue to see new patients and work with sports injuries of all types, including concussion,” Lueck said, “and our sports performance areas are spinning up nicely.”

A U.S. Navy Special Operations Group participated in a research project using the center’s altitude and environmental chambers, which simulate conditions in which athletes compete.

And athletes, from local high school soccer players to “podium-level” Team USA members training for the upcoming Olympic Games, are honing their skills in the performance center, Lueck said.

Several unique training programs, including a golf fitness and swing analysis, will be offered starting in June, and the altitude and environmental chambers will be open to the public this summer.

Weidner Field got its temporary occupancy permit April 9 and will have its permanent permit next week, said Nick Ragain, president of the Colorado Springs Switchbacks Football Club.

“We’re starting to move furniture into the venue, getting the offices situated, and doing the things to allow our team to hit the ground running,” Ragain said.

“We have a couple of opening events later this month, and then in May, between graduations and the grand opening, we’re going to be off to the races,” he said.

The stadium’s grand opening and the Switchbacks’ first regular season game will be May 21, and will be celebrated with fireworks and “all kinds of stuff,” he said.

Season tickets for Switchbacks games and tickets for several concerts in May are on sale, but these events likely will still be limited in capacity under COVID restrictions.

Three of this season’s games will be broadcast on major ESPN channels, placing Colorado Springs solidly on the map of professional soccer, Ragain said. He expects the huge sculpture at the northeast corner of the stadium grounds, which represents the world of sport, to become a recognizable symbol for the city.

Construction of Robson Arena hit a big milestone in March, when the concrete slab was poured for the ice surface on which the CC Tigers will play, said Vinnie Mattivi, senior project manager for Nunn Construction.

“We’re now in the finishing stage,” he said. Seating will be installed beginning at the end of this month.

The 323-space parking garage on the south side of the arena is fully erected and ready for topping slabs, and the arena is on track to open in mid-October  for the 2021-22 season, Mattivi said.

The City for Champions projects are meant to be an economic catalyst, said Bob Cope, Colorado Springs’ economic development manager.

“C4C has already exceeded my expectations,” Cope said. “Before the projects were built and opened, we saw an increase in interest and actual investment in and around them. Now, look at the cranes in the air.

“Other projects primarily in Downtown are a direct result of the museum and the other C4C projects,” he said. “That is going to continue for years in the future.”