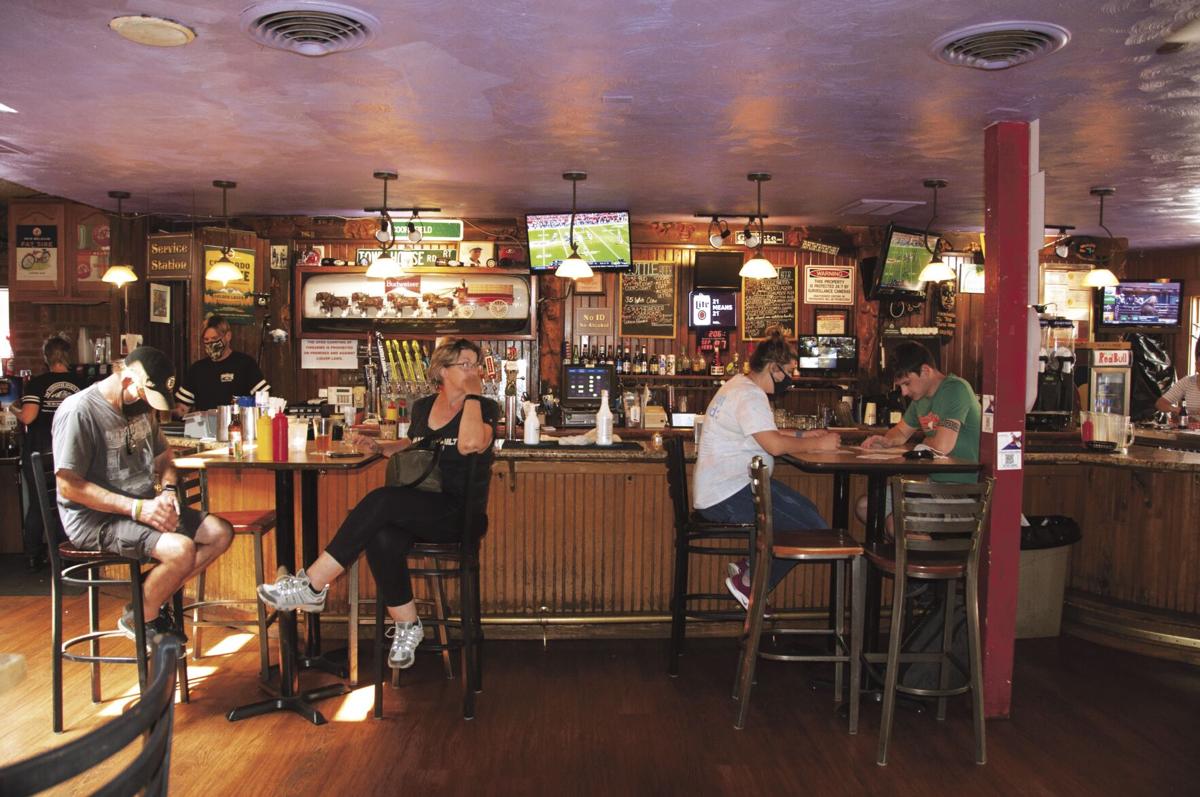 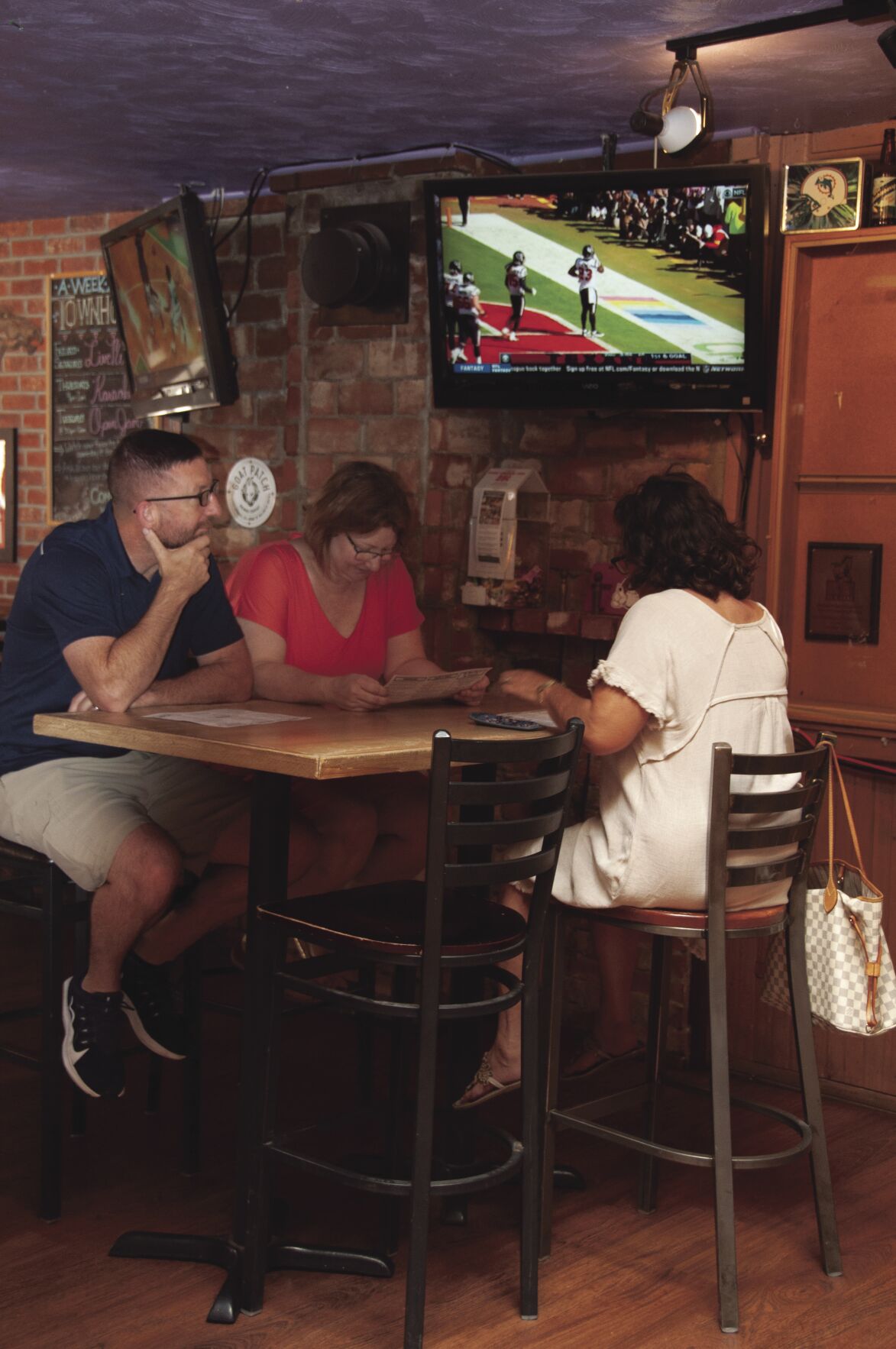 The Townhouse Sports Grill offers a variety of games on 17 screens. 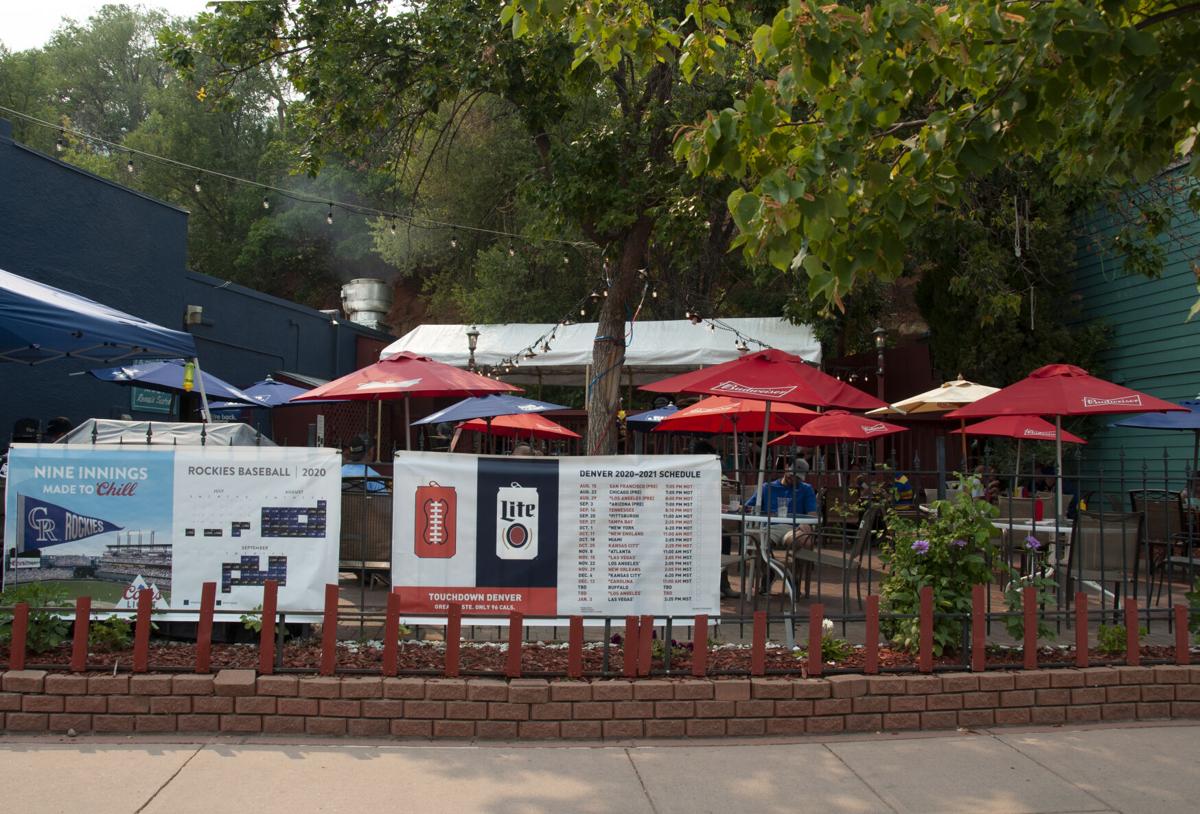 The Townhouse’s large outdoor patio is a popular spot where diners can enjoy a meal and safely socially distance.

Bars, like restaurants, have been struggling with the closures and restrictions imposed on them because of the COVID-19 pandemic.

Sports bars have faced a double play, as they were required to close for in-person service for 74 days, and the live games and competitions that are a main draw stopped in their tracks.

With professional sports — from baseball to hockey to basketball — in full swing and football season kicking off, sports bar owners and managers are hoping they’ll be able to fill their available seats again.

“We are looking forward to football, because that is our biggest draw,” said Tyler Sherman, co-owner of The Bench, a sports bar and restaurant in south downtown.

In the meantime, sports bars have counted on specials and their regulars to help them stay in business.

Sherman said The Bench is playing all televised sports on its 11 screens but thinks patrons have a little less interest in watching sports.

“It’s a different experience for people,” Sherman said. “Even for the televised fan, not having fans in the stadium makes it a different thing. You don’t hear any cheering; it’s a little bit of a disconnect from what everybody’s been used to. Even something like auto racing is very strange to watch without people.”

“We have an amazing regular crowd.”

In the past, patrons who came in to watch a game would sit at their table for the duration of the game, which could last three or four hours. That wasn’t a problem when the bar was able to fill all of its seats.

“But when you’re only allowed half as many people and they still hang out for the same amount of time, it really does affect the bottom line, not only of the restaurant, but of our servers and staff,” he said.

Thus far, Colorado Avalanche and Denver Nuggets games have drawn the most fans to The Bench. Sherman said the bar got a good crowd for the final game of the Avs versus the Dallas Stars’ seven-game series on Sept. 4.

With the Avs now out of the running for the Stanley Cup, Sherman is looking toward the nascent football season and the Sept. 14 Broncos opener versus the Tennessee Titans to bring in fans.

“We don’t see as many crowds and rushes as we used to, but it’s definitely steadier now,” he said. He is seeing regular customers return for happy hour from 3-6 p.m.

Sherman said the hours between noon and 5-6 p.m. are the most popular times on weekends. The restaurant serves a midday brunch that attracts a steady clientele.

The Bench is still serving most of the items on its menu, although it has streamlined the choices a bit and added a few others for fans to munch while they watch.

With limited seating, Sherman is recommending that customers make reservations, especially if they want to come in when popular games are scheduled to be televised.

Sherman said the 11 p.m. closing time for bars hasn’t affected The Bench as much as it has other bars.

“People just don’t seem to be going out as late as they were before,” he said, “but we always focused more on being a restaurant than a bar. We typically have been closing earlier because we have not seen the evening and late-night clientele. … Of course, if there’s a game on, we’re not going to kick people out. We’re going to do what the customers want.”

The Townhouse Sports Grill in Manitou Springs shows sports on 17 screens and is starting to see an uptick in patrons coming in to view games.

“There’s a lot less going on right now, but we definitely try to have everything that we can possibly have on. If somebody wants to have a certain game on a certain TV, we try to accommodate them as best as possible.”

Over the Labor Day weekend, the Kentucky Derby drew a sizable crowd inside, and the Townhouse’s large outdoor patio also attracted many visitors.

Hampshire said the restaurant has one of the largest, if not the largest, outdoor dining spaces in Manitou Springs.

“We’re able to take advantage of that,” he said.

Like The Bench, the Townhouse has relied on people who show up regularly at the bar.

With a normal capacity of about 200, the Townhouse would be able to accommodate a maximum of 100 people under state regulations.

“But it ends up being a little less because the tables have to be 8 feet apart” to ensure proper social distancing, Hampshire said. That means only about 50 people can actually be accommodated indoors.

Last year, he said, the Townhouse employed about 70 people but now has only around 40, including kitchen staff.

“We dropped down the number of beers that we had on tap,” he said. “At the lowest point, we had five. We actually just got back to all 16.”

Losing the hours between 10 p.m. and the normal 2 a.m. closing time has taken a big bite out of business, he said, and continues to do so although the Townhouse can now stay open until 11 p.m.

“We’re known for having live music Friday and Saturday nights,” he said. “People come out and hit the town, and we’re one of those stops, but that’s not happening anymore.”

“We can’t have anybody perform right now because [customers] have to be 25 feet away from anyone performing,” Hampshire said.

One of the most difficult issues has been changing regulations for bars and restaurants, especially about operating hours.

“In June and July, it felt like almost every day,” he said. “That’s probably what’s been one of the hardest things other than lack of sales.”

At the Dublin House Sports Bar and Grill, a venerable spot in northeast Colorado Springs, patrons can watch their choice of sports on one of 33 large and small screens.

Baseball, hockey and football are the most popular sports, and Service Manager Nicole Cross was eagerly awaiting the start of the football season.

The Dublin House gets a diverse crowd of patrons.

“We have an amazing regular crowd,” Cross said.

“Everybody’s been coming in a little earlier,” she said, especially the over-55 crowd and people who are home-schooling their children.

“In the beginning we had to [lay off staff],” she said. “But now we’re back to full strength” of about a dozen employees. Cross said Dublin House has continued to offer daily happy hours and taco Tuesdays, which are getting good responses.

“We really haven’t changed anything,” she said. “We’ve had to drop a couple of specials because of not being able to hit capacity.”

At another northeast sports bar, the Playing Field Sports Bar, owner Mike Neppl hasn’t yet seen the return of older patrons who would come in to play poker in the mornings.

With 8,400 square feet of space, 28 screens and a full menu, the Playing Field can hold 100 people under the state’s regulations.

But those regulations required bars to close down darts, pool tables, board games and other activities that would be touched by multiple patrons.

That’s hurt, he said; the poker games “were a daily thing for us.”

With the restart of football, Neppl hopes the bar will fill up again.

“We usually get the best crowds for the Broncos and second best, the Dallas Cowboys,” he said.

“People are worried about this COVID, and you can’t blame them,” he said.

Neppl, who also owns All Purpose Roofing and Gutters, said his bar business is about half what it was before the shutdown.

“If I didn’t have the other business,” he said, “I’d already be closed.”