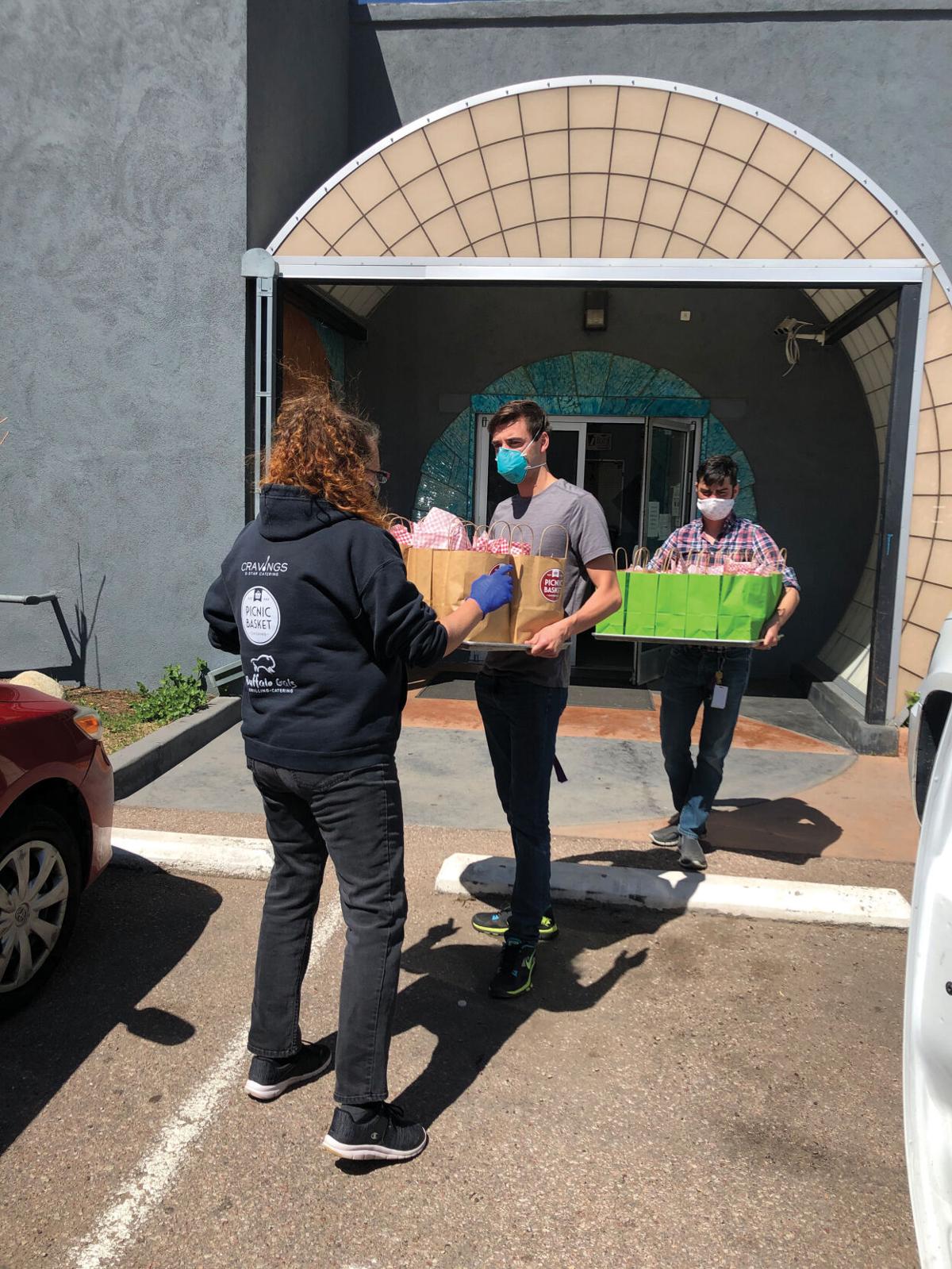 Picnic Basket employees drop off meals at The Place. The company donates one meal to a family in need for every 10 meals it sells. 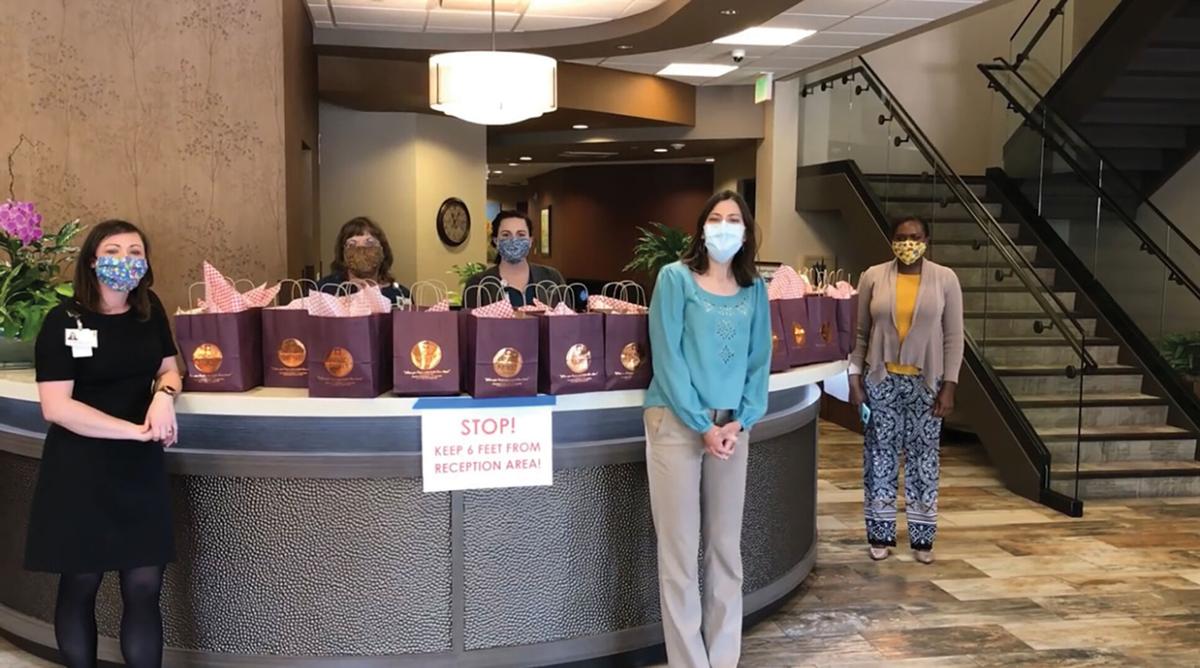 Picnic Basket Catering donated meals to Pikes Peak Hospice. Customers often choose companies that give back to the community.

The Colorado Institute for Social Impact is expanding its efforts to promote social entrepreneurship to other communities throughout the nation, and CEO Jonathan Liebert says the Colorado Springs-based organization has the opportunity to become a national leader in the development of a new way of doing business.

The institute grew out of conversations between Liebert, who also heads the Better Business Bureau of Southern Colorado, and local business leaders about how they could incorporate a higher purpose that serves the community into their business models.

“If you can harness the powerful economic engine of capitalism to create good instead of only gain, then it’s a powerful way to solve problems,” Liebert said. “We want to harness the power of social impact to accelerate the evolution of business.”

Since 2016, the institute has been working with local businesses such as Picnic Basket Catering and the Men’s Xchange to make social impact a part of their business plans.

The institute has adopted the abbreviation CI4SI, with the numeral representing the emerging fourth sector — the purpose-driven model that merges doing business and doing good.

Research has shown that this model is gaining strength among businesses throughout the world and becoming a viable sector in addition to the traditional economic sectors: public (government), private businesses and nonprofits.

The model works the other way, too — it helps nonprofits find ways beyond fundraising and donations to sustain their work.

One indication of the sector’s growth is that it is attracting investment. The MSCI KLD 400 Social Index (formerly the Domini 400) owns 400 U.S. companies and focuses on socially responsible investing, and there are others.

Customers are responding to this new business model, Liebert said.

“Some of the research that’s out there shows that there’s some companies that are doing very well financially and have strong social or environmental causes built into the very fabric of their business,” Liebert said. “And so we educate people on what those are, how this works, and how you can do that at a small business or larger system.”

CI4SI is developing initiatives such as a new social ROI, and is working with other communities including Kansas City, Missouri, to expand the institute’s operations and share the benefits of social entrepreneurship.

Education is important to help develop an ecosystem in which social enterprise can flourish, and Liebert is working with local school systems and UCCS to create educational components.

SI BY THE NUMBERS

CI4SI has undertaken two major initiatives to spur that movement: a specific measurement called social return on investment and a certification program.

Return on investment is half the equation, Liebert said. “The other half is, what’s your impact on the community and environment?”

Liebert notes that CI4SI did not coin the term SROI, but it has developed a way to measure an organization’s impact on the community.

CI4SI is collecting data to create baselines from the work it is doing with individual companies and nonprofits and is developing individualized scores.

“Our vision is to have an ROI calculator that you can plug information and data into and it gives you a number … that people can see and track,” he said.

But already, Liebert and his staff are helping people determine ratios that tell consumers what percentage of their dollar spent with the company is going to community projects.

“You know it’s a huge success if for every dollar you spend at a store, you get a dollar back in return to your community,” he said. “That’s a one-to-one ratio, and we’re getting numbers that are higher than that.

“This gives us the proof that you should support businesses that make money and have a higher purpose, because you’re creating jobs, creating economic vitality and solving social issues.”

Liebert expects the institute to contribute a significant amount of research to show that these businesses work, and work well.

While it’s possible to spend four years studying for a degree in social entrepreneurship from an Ivy League school, the institute is one of the first organizations to offer a certification program for working professionals.

The three-day intensive course, which teaches the basic building blocks of starting a social impact business or converting an existing business, began a year and a half ago and has drawn participants from out of state as well as from Colorado.

About 30 people have completed the course and earned the certificate, Liebert said.

“Hopefully, when COVID goes away, we’ll get back to getting more people from out of state,” he said.

CI4SI also offers free, standalone classes that have drawn more than 1,000 people over the past three years.

The institute is partnering with a group headed by a graduate of the certification program to create a similar organization in Kansas City. The effort includes working with the city on policy development and with several foundations that will underwrite the new organization.

Liebert said he is talking with several other cities, including Dallas and Austin, Texas, that have come to him for help in creating a social enterprise ecosystem.

As these cities and regions recover from the economic impact of COVID-19, “they want to create more businesses that are focused on having economic impact as well as some type of mission,” Liebert said.

This is an opportunity not just to rebuild the economy, but to build it better by inserting purposes into business models, he said.

Liebert said there are other states and cities that are independently doing work along these lines.

“They are more advanced than we are in some cases,” he said. “But given the size of our community, and the people that are in this community, I would say that there is absolutely no reason why Colorado, and specifically Colorado Springs can’t lead the national movement in this.”

As a result of its interactions with CI4SI, the Picnic Basket launched a social impact page on its new website, which went live two weeks ago.

“We sort of have a joke at our company, that we operate more like a nonprofit, but we’re a for-profit catering company,” co-owner Michelle Talarico said. “We were a social impact business long before it was a cool thing to do and a smart thing to do.”

Liebert and Stacy Burns, CI4SI co-founder and chief impact officer, worked with the Picnic Basket to express what the company was already doing.

“You’ve got to tell people [what you’re doing] because people make decisions now about what kinds of businesses they want to support,” Talarico said. “In large part we’re finding that a lot of people are wanting to line themselves up with companies that have as one of their strategies that they give back to the community.”

Under the tutelage of CI4SI, the Picnic Basket tracked the numbers and found that it is giving away free meals that represent $10 for every $100 the company brings in.

The company is developing powerful messaging and images around its social impact.

On Thanksgiving Day, “we’re going to start making a bigger deal about the fact that for every 10 packages that people order for their family meals, we’re able to give away a package for a family in need,” Talarico said.

Once the company is able to start doing buffets again, it will be using a visual representation of this effort — including one bright red plate for every 10 white plates in the service.

“We’re going to start being better about bragging about ourselves a little bit,” Talarico said. “And we realize that that doesn’t make us blowhards, that doesn’t make us egotistical. It just makes us smart, because there are people who hire a caterer based on the simple fact that they want to work with somebody that gives back.”

The Picnic Basket also is collecting more data to determine how much of their business comes from people like that.

“We think somewhere between 60 and 80 percent of our business comes from ROI, based on that giving,” Talarico said. “But we want to be able to back that up.”

Teaching people about social impact is part of creating an ecosystem for social entrepreneurship, Liebert said.

“We helped create a curriculum in District 11,” he said. “We’re working with District 2 and some other districts in our city.”

There’s interest at the state level, as well as in other states, in curriculum development for high school juniors and seniors.

Liebert partnered with Pikes Peak Community College to help create curriculum for a business-social innovation AAS degree that already is being offered through the Business Department.

In addition, Liebert will be teaching the first social entrepreneurship course in the School of Business at UCCS next spring.

There are efforts in the College of Business and the School of Public Affairs to build a social enterprise curriculum.

“We involve partners in the community, and the students develop a social business plan and engage in an array of traditional nonprofits and social enterprises,” Reed said. “We’ve worked with great organizations like Blue Star Recyclers, Men’s Xchange and the Independence Center.”

The course “is not just theoretical classroom using papers,” he said. “It’s about getting out there and working with these organizations and engaging in experiential learning.”

At the undergraduate level, the School of Business has developed a course that Liebert and Burns have helped deliver and that Liebert will teach.

Reed sees potential for further curriculum development at UCCS that could result in a minor, concentration area or certificate.

Reed also sees the potential for Colorado Springs to be a leader in social entrepreneurship.

“When you get a critical mass of social impact businesses, [others will] come here, he said. “I think it would be wonderful if Colorado Springs were not only Olympic City USA, but also Social Impact USA.”