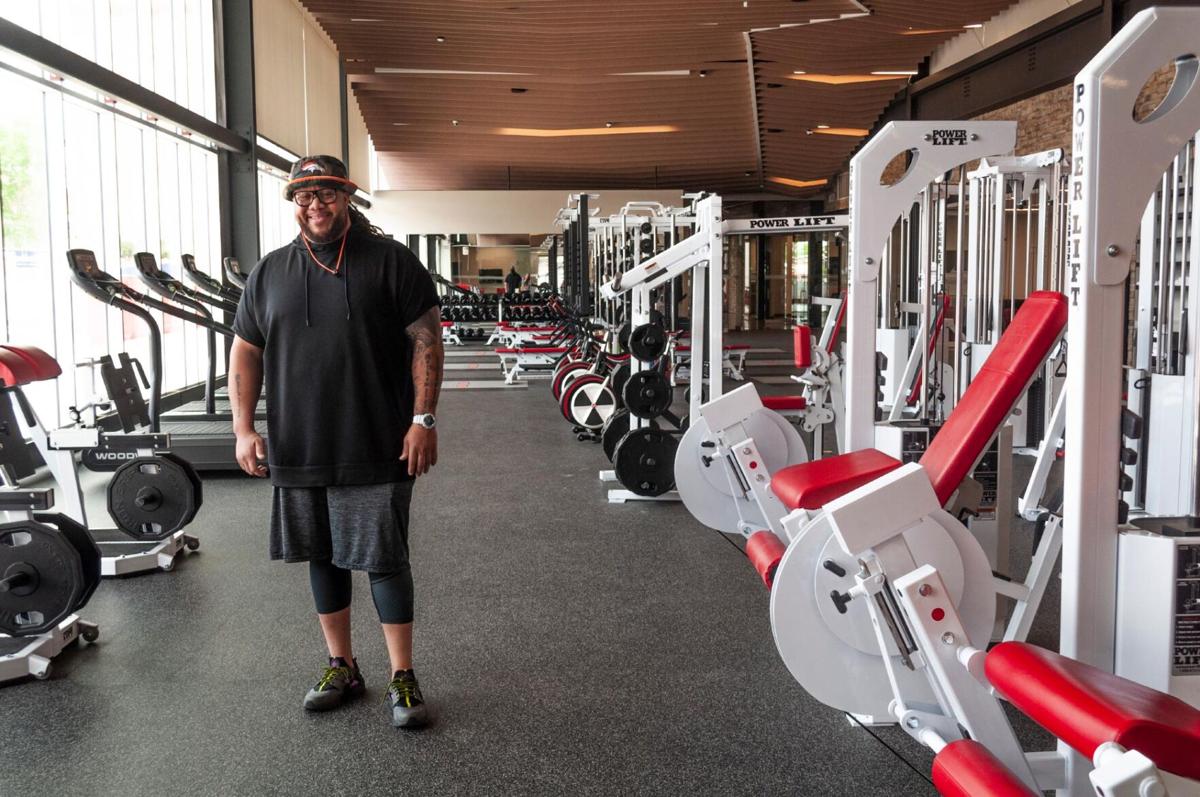 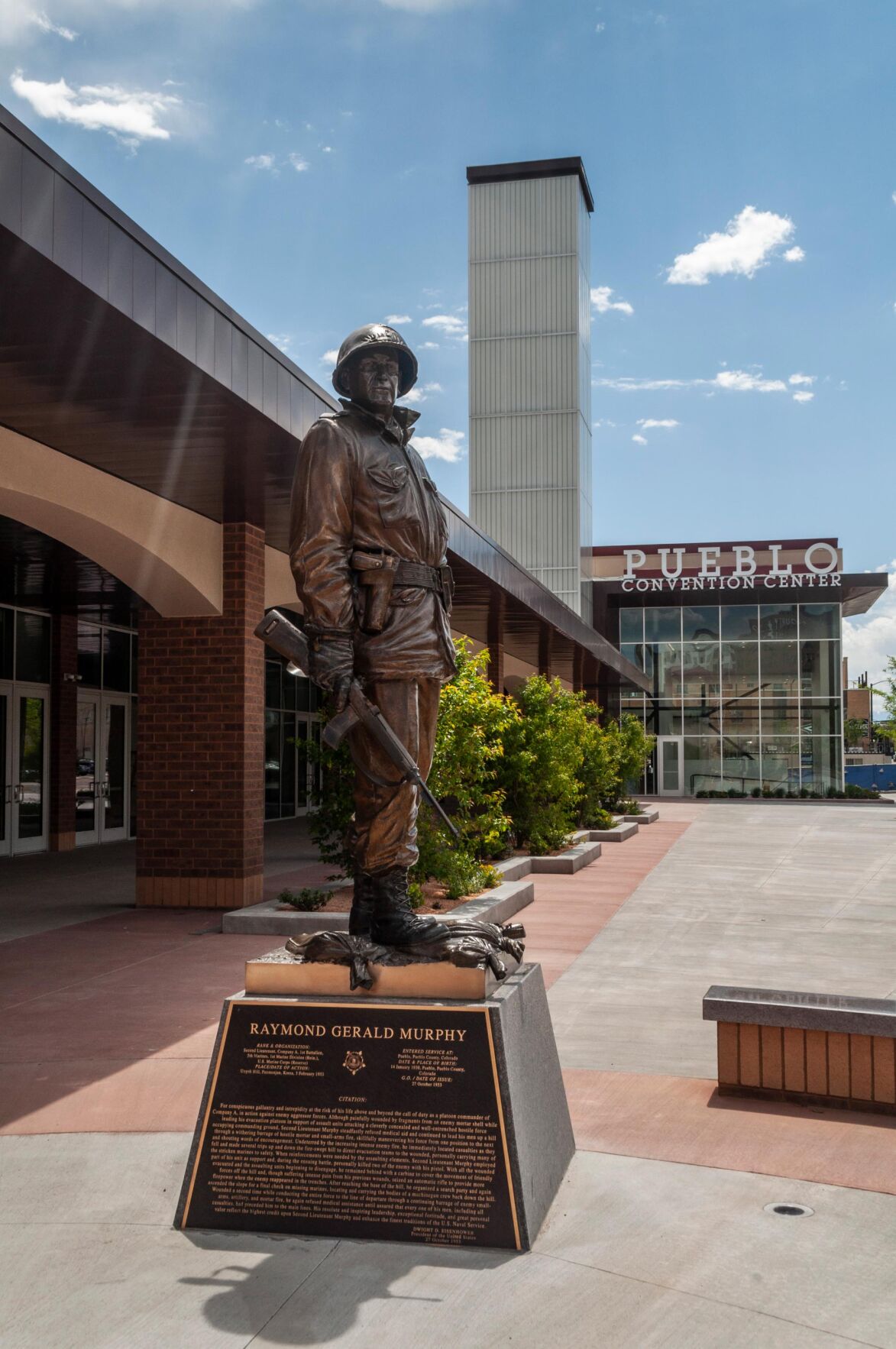 The sport performance center displaced the Medal of Honor Plaza, which was moved to a new site.

Just as the center will enhance the fitness of Western sports athletes, backers expect the PBR addition at the south end of the refurbished Pueblo Convention Center to spur economic development in downtown Pueblo. The benefits are spilling over to the Historic Arkansas Riverwalk as well.

“We’re going to be bringing in people from all over the world to train,” said Melissa Henricks, PBR vice president, athlete initiatives and development. “We have all the other disciplines in Western sports, and we’re going to be doing some traditional club sports as well. Ultimately our goal is to make this such a facility that people all over the world want to come here to train.”

Training camps and events at the new exhibit hall adjacent to the training center will generate revenue for hotels, restaurants, car rental companies and businesses along the Riverwalk.

Athletes will come from as far away as Brazil to train under the direction of Antwon Burton, former defensive tackle for the Denver Broncos, who is executive director of the new sport center.

He expects to be bringing on two to four staff members during the summer and hiring training and recovery specialists for specific sports camps, such as gymnastics and wrestling. The year-round camps will accommodate 10-50 people per event and will last from two days up to weeks at a time.

The sports center, which was introduced to the community at a ribbon-cutting ceremony May 3, opens officially on June 1.

The first scheduled camp will feature mental toughness training for bull riders with a sports psychologist. More events will be scheduled during the summer.

Burton and Henricks view the sport center’s inaugural summer as a time to build the center’s reputation.

“The biggest thing is to create a baseline moving forward … to understand our Western sports performance, our local athletes and people we already know that are interested, and perfecting that,” Burton said.

The $38 million convention center project includes the Sport Performance Center, Pueblo Welcome Center/PBR Fan Zone, exhibit hall with a 42-foot ceiling, and an 82-foot-tall steel and glass tower that glows like a beacon at night. A new 449-space garage across the street accommodates parking.

The Welcome Center and fan zone is designed to delight Western sports fans.

The PBR moved its international headquarters to Pueblo in 2005, lured away from Colorado Springs when it needed more space, but hasn’t had a destination where fans can see memorabilia and buy merchandise such as T-shirts.

The exhibit hall adds flexibility to the space the convention center offers. It will accommodate events from cheerleading competitions and basketball tournaments to trade shows.

The $2.7 million Gateway Plaza, an outdoor activities space that links the sport performance center with the Riverwalk, is under construction and will be completed this fall.

The convention center itself got an interior facelift, with new paint, tile and carpet throughout. The Medal of Honor Plaza, with its bronze statues of Pueblo’s Medal recipients, was moved to a new site at the north end of the convention center. The plaza was rededicated in a ceremony May 11.

The sport performance center was designed with input from the IMG Academy in Bradenton, Fla., the world’s largest multisport training and educational center.

“Our role has been to collaborate with them and give them the benefit of our 40 years of experience of running a performance environment,” said David Hesse, IMG’s vice president for performance.

The IMG Academy, established in 1978 as the Bollettieri Tennis Academy, started out with 40 acres and has grown to a campus of more than 600 acres that attracts elite athletes from 85 countries.

Hesse said the IMG Academy has become a major part of the Bradenton community and he expects the PBR sport center to do the same in Pueblo.

“The analogy with what PBR is trying to do here is, plant an acorn and allow that to grow  … and develop a reputation for a high-performance environment for athletes,” Hesse said. “And from that you bring in new investment, you have hotel nights, you have money coming into the economy.”

The team initially is looking at Western sports, but “once they develop that expertise, then they’ll find other sports” and other opportunities such as coach education programs, he said.

The convention center improvements were financed by a major state tourism grant and federal dollars.

With that expansion, “the epicenter of the city has moved to this area,” said Jerry Pacheco, executive director of the Pueblo Urban Renewal Authority. “Visitor traffic is up; pedestrian traffic is up. We’re really urbanizing the area around our Riverwalk, and we’re seeing more development.”

In the next three to four years, there are plans for development of an aquatics center with a competition-sized pool and indoor water park, a boat house, at least two hotels and a commercial building.

A Marriott property, the 80-room, extended-stay Townplace Suites that will be a companion hotel to the existing Courtyard by Marriott Pueblo Downtown, “is about ready to pull a building permit,” Pacheco said.

Another hotel proposal has been submitted for the old police department lot on Central Main Street between the sport performance center and Brues Alehouse Brewing Co.

And once there are firm plans for relocating the city bus garage, “we’ll move toward reclaiming that site and offering it to development,” Pacheco said. “We’ll probably be looking for a master developer.”

The convention center project has sped up the pace of these development plans and is bringing national attention to Pueblo.

“PBR has a special arrangement with CBS Sports; they’re going to advertise through their media network,” Pacheco said. “We couldn’t pay for that type of exposure.”

Pacheco said he doesn’t view the project as competitive with anyplace else.

“Colorado Springs has its City for Champions project,” Pacheco said. “We’re doing our own little thing here in Pueblo. We don’t have the big space they do in Denver and the Springs, but we do reach a different type of market. … We’re all trying to meet the same goal: getting people to come to Colorado.”