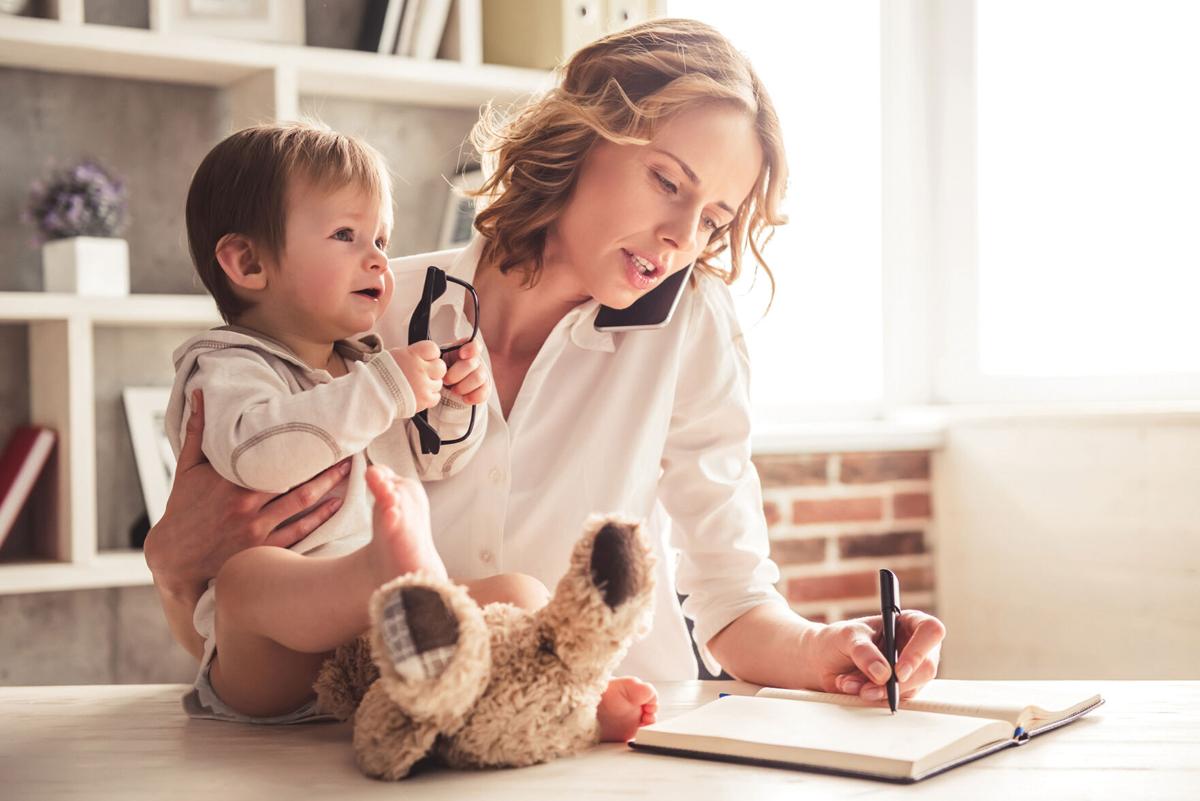 Women bring crucial skills and benefits to the workplace.

According to the Center for Creative Leadership, research has shown that, among other things, gender-diverse teams have higher sales and profits compared with male-dominated teams.

The center’s own research found that a higher percentage of women also correlates with greater job satisfaction, more meaningful work and less burnout in an organization, as well as greater employee engagement and retention. (The article, “Women in the Workplace: Why Women Make Great Leaders and What You Can Do to Retain Them,” can be found at ccl.org.)

Other research is showing, however, that women are having greater difficulty overcoming barriers to re-entering and remaining in the workforce, and in reaching positions of responsibility, than men.

From January 2015 to January 2020, “representation of women in senior-vice-president positions grew from 23 to 28 percent, and representation in the C-suite grew from 17 to 21 percent,” a report from McKinsey & Co. stated. The numbers were slowly improving, although women — particularly women of color — were still underrepresented.

But the pandemic has intensified the challenges women already faced, such as being paid less — about 82 cents to every dollar that men make and overrepresentation in lower-paid service jobs. And the supports that make it possible for women to work, including school and child care, “have been upended,” states the report, which updates findings of an ongoing study of women in the workplace now in its sixth year. (The full report can be viewed at mckinsey.com.)

“Women — especially women of color — are more likely to have been laid off or furloughed during the COVID-19 crisis, stalling their careers and jeopardizing their financial security,” the report says.

“As a result of these dynamics, more than one in four women are contemplating what many would have considered unthinkable just six months ago: downshifting their careers or leaving the workforce completely,” it states. “Companies risk losing women in leadership — and future women leaders — and unwinding years of painstaking progress toward gender diversity.”

But this crisis also represents an opportunity for companies and communities to invest in gender diversity.

Companies across the nation are beginning to make those investments — and in Colorado Springs, government, business and community leaders are seeking creative solutions to some of the impediments the COVID pandemic has so glaringly revealed.

“There are so many dimensions to this,” said Tatiana Bailey, director of the UCCS Economic Forum.

During the same period, the participation rate for men 20 years old and above dropped from 71.6 percent to 69.8 percent, while the rate for women fell from 59.2 percent to 57.1 percent.

The Bureau of Labor Statistics also tracks women who have opted out of the labor force.

About 51 million women were not in the labor force in September 2020. A year later, that number had swelled to 54 million.

“So 3 million more women — and we’re not even in the winter months yet, because I think we’re going to see more shutdowns,” Bailey said.

Local data is lacking, but Bailey said El Paso County’s population is large enough so that “we are usually fairly representative of what’s going on with some of these broader U.S. statistics.”

Part of the difference is explained by the fact that women disproportionately work in service-oriented industries such as hospitality and retail that were hit hard by the pandemic.

“A little less than half of all working women — 46 percent — work in these low-paying jobs with a median earning of $10.93 an hour,” Bailey said. “If they all of a sudden have to start paying for child care, because schools are closed or partially closed, work just doesn’t make sense anymore.”

Women in these lower-paying industries typically don’t have benefits like health care and paid sick leave, “so that starts to come into the equation as well,” Bailey said.

Many women who were working in other industries had to quit their jobs to take care of their kids and/or their elderly parents.

The economic effects of women leaving the labor force are profound.

“When someone doesn’t work, they’re not contributing to the tax space; they’re not increasing productivity,” Bailey said. “And sometimes, for lower-income homes, they’re having to draw on social assistance programs, which are very expensive.”

Women’s traditional roles as caretakers, as well as their lower economic status compared with men, are playing into the decisions families are making, said Lola Woloch, president and CEO of the Southern Colorado Women’s Chamber of Commerce.

“It’s the woman … who winds up taking a step back to do the home care and schooling,” Woloch said. “If they remove themselves from the workforce, when it comes time to re-enter, they probably are not making what they once were. … If women are set back during this time, it’s going to be even more difficult for them to move forward.”

Women also tend to volunteer and are less able to do so during the pandemic.

“So that starts impacting our nonprofits in our community,” Woloch said.

Woloch said a recent report from WEConnect International, an organization that helps women business owners compete in the global marketplace, showed that more than 90 percent of women entrepreneurs internationally were reporting decreases in sales during the pandemic.

Balancing work and family responsibilities, as well as lack of access to working capital, were the main factors impacting those women-owned businesses.

The vital child care industry has been hit hard by the pandemic.

“Child care facilities are not operating at full capacity,” Bailey said. In the United States as a whole, available child care services are 20 percent below levels from the same time last year.

Although there are indications that local capacity hasn’t dropped that much, “it’s a very fragile business model,” said Diane Price, CEO of Early Connections Learning Centers. “There’s a very low profit margin, and people just don’t have the reserves and money to get through difficult times. A lot of places closed down for a period of time over the summer and are now reopening or trying to reopen.”

As an essential provider of care that focuses on lower-income families and single parents, Early Connections’ centers have remained open.

Child care providers are struggling with workforce issues as well.

“People are not going into the field of early care and education as much as they used to 20 or 30 years ago,” Price said. “We’re having a hard time finding teachers. And pay is a very big challenge; it’s not a well-paid career.”

Price thinks there is enough local child care capacity for 3-to-5-year-olds, “but there is nowhere near enough capacity in our community — or in our country — for children that are birth to 3. That’s a very expensive part of delivering child care, and in tough times, it’s even more expensive.”

Care for school-age children is another challenging area.

“A lot of schools aren’t comfortable doing before- and after-school care,” Price said. “What’s happened is that schools will contract with an outside organization to come onsite and provide child care.”

The pandemic “has exposed a lot of issues like the whole child care thing, and how difficult it is for women in the workforce,” Bailey said. “So why don’t we capitalize on that and look at what some of the solutions are, and use this pivotal time and the momentum in order to implement some innovative ideas?”

Bailey has been participating in weekly meetings of the Economic Development Regional Recovery Council, a group that includes city, county, public health and other community leaders.

“I’m really glad that I live in a state that supports the idea of paid family leave.”

“One thing that we’ve been talking about is that … there’s going to be a lot more virtual work moving forward indefinitely,” leaving some commercial and office space unoccupied, Bailey said.

“What if we took some of that space … and we started to implement more onsite child care?” she said. “That would bring down the cost of child care, because the child care facility doesn’t have to pay for space as much, and you transfer some of that to the salaries of the workers. So maybe instead of making $12 an hour, they’re making $15 an hour, $18 an hour. That would reduce turnover and increase worker satisfaction.”

Price is helping to train child care ventures on sustainable business practices and also is working through the state Office of Early Childhood to educate businesses about how they can support their employees’ child care needs.

Organizations throughout the community are developing more resources for women who want to re-enter the workforce.

The workforce center offers virtual workshops for people re-entering the workforce, including UpSkill 2020 for those who are looking at changing careers, Executive Director/CEO Traci Marques said.

The women’s chamber and workforce center will be partnering to offer seminars to women in transition during the first quarter of 2021, Woloch said.

Besides providing practical support, the community needs to work on breaking the traditional norms that bind women to undervalued jobs, Bailey said.

“Let’s step back and look at these positions as investments in our future — maybe a national policy for at least some baseline benefits,” she said. “I’m really glad that I live in a state that supports the idea of paid family leave.”

It’s also a good time to tout the benefits of hiring women, she said.

“There’s some really good data out there,” Bailey said. “Companies that have a good representation of women on their boards typically have higher profit margins. We could wave our fingers and tell companies. ‘Hey, you really should be hiring more.’ But let’s raise awareness on what we women bring to the table.”