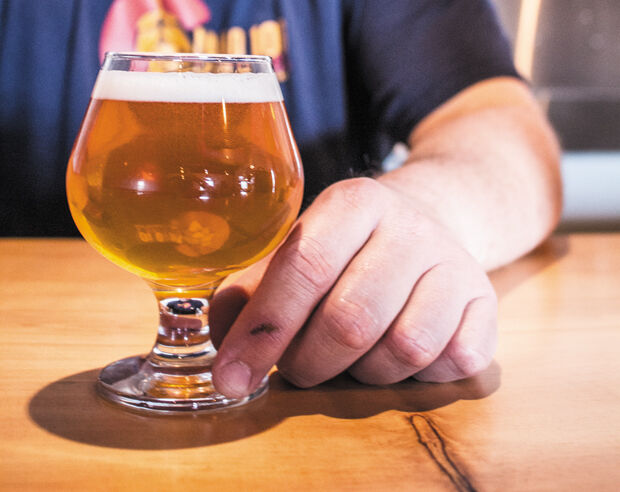 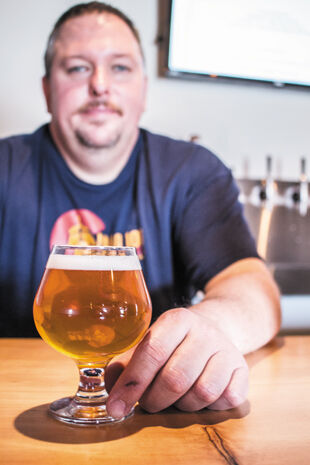 Keith Altemose brews some delicious sodas. There are his coffee colas, Madagascar vanilla bean colas, his birch beer, sarsaparilla, orange cream, cherry cream and, of course, the ginger ale with black peppercorns and whole ginger that Altemose said is “quite exciting to put in your mouth.”

Then there’s the beer. After all, that is what Altemose knows best.

The operating owner of Nano 108 — a half-year-old microbrewery located east of Powers Boulevard on Waynoka Road — will tell you celebratory Doppelbocks are consumed by Trappist monks for 42 days. He’ll talk about what they’re drinking on patios in Brussels this instant. He gets his orange rinds directly from Pakistan. He uses worldly words like Baltic porter, Russian imperial, American hops and English yeast, and is most passionate about bringing “farm-to-table” beers to the people of Colorado Springs.

Altemose takes a unique approach to brewing and business. He makes traditional and exotic styles of beer that are season-appropriate and constantly changing, while eschewing the always-in-rotation model of flagship or “base-five” beers.

“Five years ago, no one was taking a look at not having flagship [beers], or not having base-five beers. What if that would work? Most breweries said ‘Hell no.’

“I don’t think anyone has ever tried to do that in the nation,” Altemose said. “Our shtick is, we don’t repeat beers; we don’t brew them twice. We brew them once and then move on.”

Up to 18 taps in rotation

He said moving on means the 18 taps at Nano 108 -— named for his obtaining the 108th license from the state — stay fresh, with the one constant being quality.

“Sourcing is part of the thing for me,” Altemose said. “The challenge of bringing the beer to style traditionally, serving it and then telling [the customer] about it.”

Altemose said his philosophy is to over-deliver. His stark storefront and minimalist patio furniture near an old pickup truck with a sign reading simply “Beer,” are evidence he markets his brand “like a speakeasy.” And because no two batches are the same, he doesn’t bother naming the beers. They are what they are.

“When customers walk through the door, they don’t expect from the outside for it be upscale and nice. Women don’t expect breweries to have purse hooks and nice bathrooms and furniture.”

“The [India Pale Ale] market is huge right now,” he said. “I’ve been brewing IPAs my entire life. It amazes me I can chock 205 [international bittering units] in beer and people tell me it’s phenomenal. That’s taking the plaque off your teeth, brother! I’ll brew 14 and 16 percent [alcohol] beers and age it over a year and people tell me they’re only drinking that. … The market is truly in front of us. We’re not in the market. It’s still way ahead of us.”

Altemose said the art of craft brewing means beer can be appreciated like wine, where maturation and complexity are equally important.

“Some microbreweries will store beer at 34 degrees, not allowing it to develop,” Altemose said. “It’s in a closed environment and it will be the same beer now as it is four months from now. I develop beer in conditioning tanks under glycol at 50 to 60 degrees. I sit beer on fresh hops or fruits and let them maturate. I like the maturity of the beers. I have an Imperial [India Pale Ale] that started coy and sweet and very hoppy and, through time, has gone to more like an American barley wine. It has dark fruits; it’s raisiny. People get a kick out of that.”

Altemose came up through the world of corporate restaurants before opening and operating chain establishments including Red Lobster, Fox and Hound Bar & Grill and the Rock Bottom restaurant and brewery located at the First & Main retail center just to his north on the Powers Corridor.

He said he learned the business of beer by homebrewing and at Rock Bottom while overseeing its operations. An educated staff and consumer are two of the most important concepts he took away from those experiences.

“I’m an open door,” he said. “I bring staff and customers back [into the brewery] and I built the brewhouse so I could give tours. … When I’m hopping, I put little buckets all over the place and tell people to grab a bucket and throw it in, look at it, smell it, touch it and break it open. I love that. I think that’s why we do such good business. We’re open to everybody.”

And business is good. “Tremendous,” if you ask Altemose.

“My demand is so high I can’t keep my beers on tap,” he said. “I used to brew beers for 12 weeks or a season and I can’t even get one month from that. It’s a good and bad problem, for sure.”

“Craft Week really put a hit on me,” he said. “We ran 15 events and I didn’t know what to expect. I got clocked at most of them. Some events were slower than I thought and other events were enormous. The overall exposure put 1,000 people in my seats who I’d never seen before and never would have otherwise.”

Establishments with liquor licenses are required by law to make food available to patrons. Altemose said, because he is a taproom and operates with a manufacturing license and not a liquor license, he is not required to provide food. Dining, however, is still a big draw for his business, as local food trucks bring their kitchens to Nano 108.

“Pig Latin is one of my major guys, and I helped start them,” Altemose said. “They were brand-new in the business. We started out with three menu items and now they have 12. They are probably the busiest food truck in town. I also do Bite Me [Gourmet] Sausage. They do venison and specialty sausages. I have the [Good Golly Grub Trolley], which is brand-new. … It’s a big 32-foot red trolley converted to a driving trolley. You can ring the bells. Their food is homestyle cooking and it’s fantastic.”

Altemose said variety draws many of his customers, while small, simple and well-done dining and drinking options working in tandem are passing traditional bar and restaurant chain models.

“It’s doing one thing really well,” he said. “This is the model. This is a potluck brewery. You never know what someone is going to bring to a potluck, and no matter what you come in for … you’ll have a choice.”

Altemose admits the Colorado market is saturated with microbreweries — many have come and gone within the past couple decades. He said oversaturation, however, still appears a few years off.

Oregon, the state most populated by microbreweries, would be a good indicator as to when the market has had enough expansion, he said.

“It’s so easy to open a brewery in Oregon,” Altemose said. “The zoning isn’t the same. I can open a microbrew anywhere using regular refrigerators from 1965. They’ll have seven things plugged into one plug. All of my outlets are regulated and accounted for. It’s very difficult to open a brewery in this town. It took me almost two years. I could have opened 10 in Oregon in that time.”

Altemose said his plan, along with his investors’,is not to slow down, but rather move ahead slowly.

“There’s no rush,” he said. “It’s always been about one customer at a time.”

He said he has recently acquired the space next to him and is planning to increase production and, one day, bottle for distribution. That means hiring more staff.

He currently employs five people, including back-of-the-house brewery assistants as well as wait staff, but needs more help going into the summer season.

“I need to hire as much as my budget will pay,” he said. “I’ve been working 100-hour weeks. I don’t get one day off. I don’t have a problem with that. I’m a workhorse. However, I’d like to balance my children, wife and a couple other things I have going on a little better.

His challenge will be finding help that delivers his message with equal verve.

“No one in brewing works harder than me,” Altemose said. “No one has more hands on from the front to the back. I brew every batch and touch every beer all the way through. It’s a lot of work. But that’s what allows me to be this passionate.”