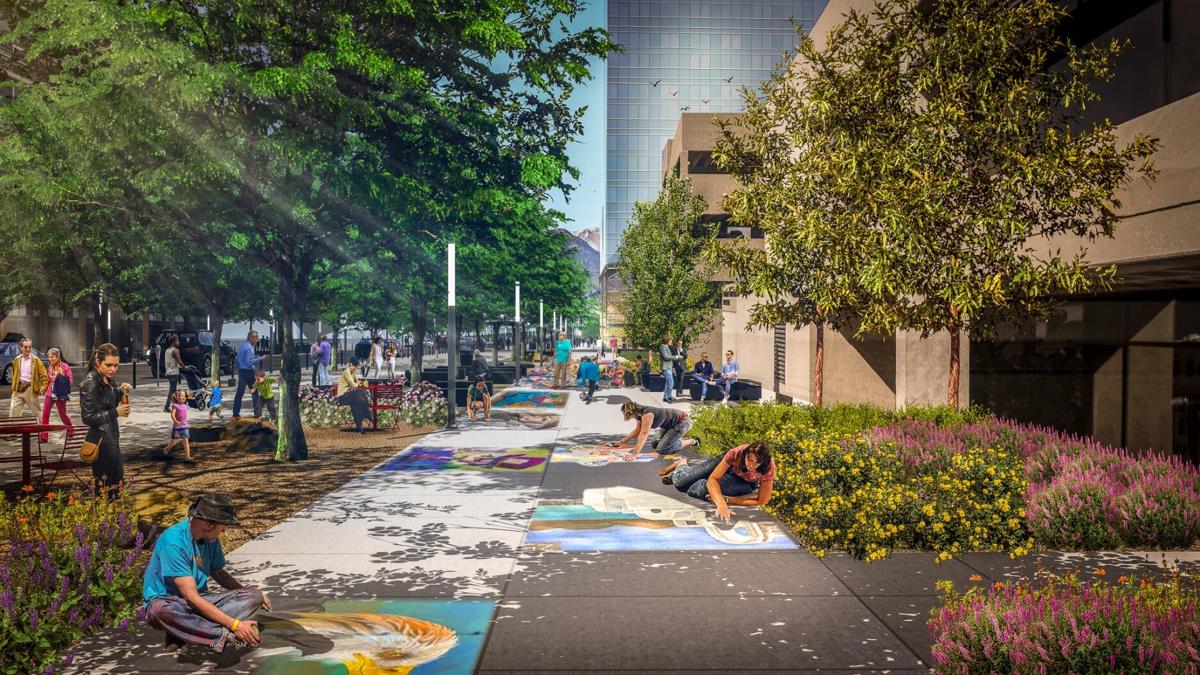 Vermijo Street will become a gateway to the U.S. Olympic & Paralympic Museum and Hall of Fame. 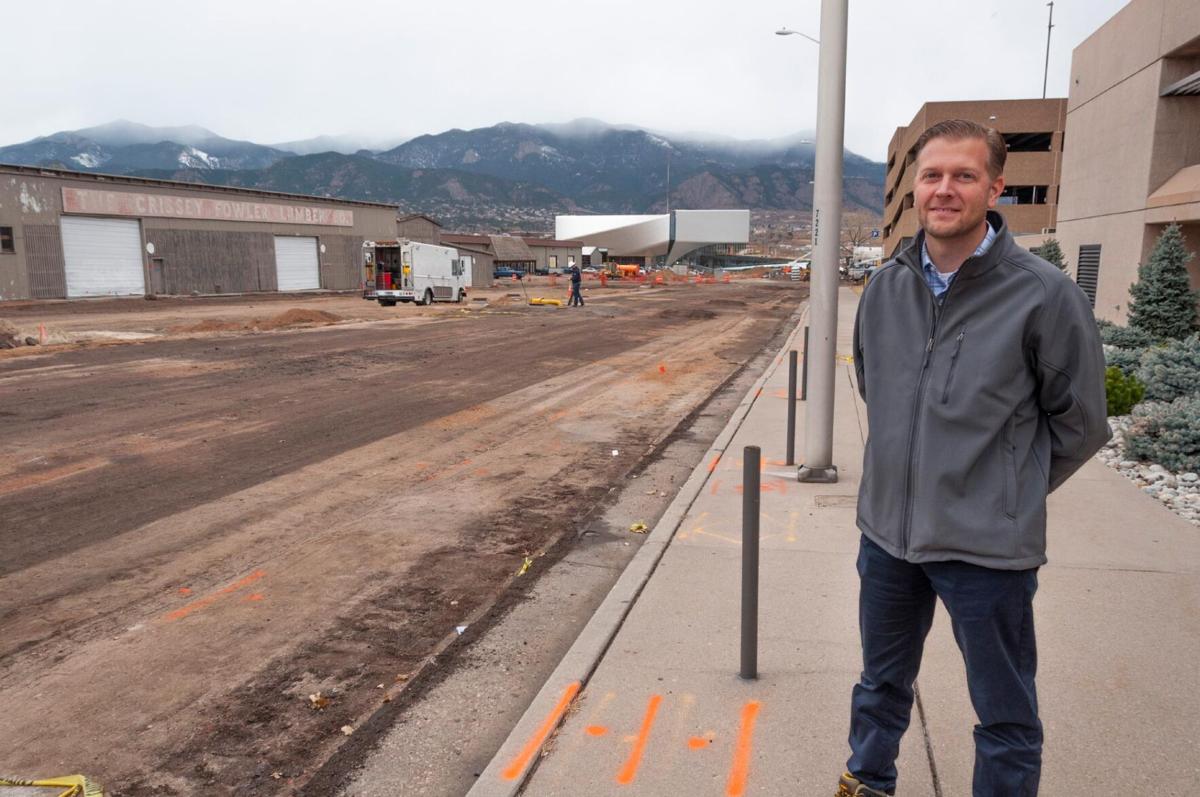 Engineer Ryan Phipps stands in the area that will be a wide pedestrian walkway and gathering space.

With construction of the U.S. Olympic & Paralympic Museum and Hall of Fame hurtling toward completion, a project that will link the museum and America the Beautiful Park to downtown Colorado Springs is shifting into high gear.

The Vermijo signature street project will transform the area from Cascade Avenue to Sierra Madre Street into a pedestrian-friendly gateway culminating in the Olympic plaza at the doorstep of the museum.

Like Tejon Street, downtown’s other signature street, Vermijo will epitomize the city and give visitors and residents a unique experience, according to planners.

Looking at the dusty construction site now, that might be a bit hard to visualize, but city of Colorado Springs Senior Engineer Ryan Phipps said it won’t be long before it starts to take shape.

“This is all going to come together really quickly,” Phipps said. Although all of the landscaping and aesthetic treatments won’t be finished, “when people come to visit the museum for the first time, a lot are going to be really pleased with the transformation.”

The Vermijo project is part of a $2 billion transformation that will add offices, stores, restaurants, hotel rooms and residences to southwest downtown, with the museum as its centerpiece.

“We’ve done some sewer line relocation starting at Sierra Madre and Moreno [Avenue], and now we’re working on it in Sahwatch [Street],” he said. “They’re currently working on the section right by the [El Paso County] parking garage. We’re about halfway done with that.”

One of the most innovative features of the project’s design is the tree canopy and underground stormwater filtering system, designed to reduce flooding while watering the trees.

Most of the main line storm drainage work at Sierra Madre and Vermijo is complete, Phipps said. Crews have also installed a large water quality vault on Sierra Madre just north of the museum that will collect storm drainage from across the project area and allow sediment to settle out before it gets discharged into Monument and Fountain creeks.

“By early next year, all of our underground work should be complete, and we’ll start working on the roadway,” he said. “After the first of the year, we’ll start to see the roadway take shape.”

Sierra Madre, which leads to the museum from the north, is getting its own makeover between Cimarron and Cucharras streets.

Phipps said its configuration will be “a fairly standard, urban downtown type of street. It will have two to three lanes — it kind of changes along the length of it — with parallel parking on either side. And then we’ll have a section for landscaping and the sidewalks.”

He said he expects the street work on Vermijo and Sierra Madre will be completed next summer.

The Vermijo project and the museum will be linked with America the Beautiful Park and the Pikes Peak Greenway via a 250-foot-long pedestrian bridge with swooping lines that complement the design of the museum.

The bridge will be built in phases and assembled on site. Phipps said the bridge also will be completed next summer, and the full connection from the park to downtown Colorado Springs will be finished later next year.

With at least five designers and contractors working on the project, “the coordination effort on this project is incredible,” Phipps said.

“We’ve also been coordinating with Nor’wood” Development Group, master developer and the largest private landowner in the 81.7-acre Museum and Park Urban Renewal Area, which encompasses the projects. “We have constructed the improvements in the right of way such that, whatever buildings they decide to put up, there will be limited impact to our permanent improvements, and they should coordinate nicely.”

Plans are coming together for about 5.2 million square feet of mixed-use development within the URA over the next 20 years, Nor’wood Vice President Jeff Finn said.

“We’ve been working on approximately a 900,000-square-foot Phase 1” that will focus on three projects, Finn said.

One of those projects is a 240-room, luxury hotel across the street from the museum that will be one of the largest hotels downtown, Finn said. It will have restaurants on the ground floor and an amenity deck with a pool and hot tubs overlooking the park and mountains.

The second project is a five-story, 200,000-square-foot office building that will occupy the northwest corner of Cimarron and Sierra Madre streets.

“We’re early in the design stages for that one,” Finn said. “It’s not totally solidified, but our goal is to build a composite laminated timber building” that mimics traditional wood beam structures but uses laminated wood. “These kinds of buildings are beautiful, they’re super environmentally friendly, and it’s cleaner, it’s warmer, it’s just a better experience.”

Nor’wood is seeking large-footprint tenants as anchors for the office building.

“We’ve got a number of users that are currently in downtown and one that’s actually outside of our market who’s looking in our market,” Finn said. “We’re at a place now where if there was a 50,000-square-foot user that needed a place to be and they want to be downtown, there’s no 50,000-square-foot space available.”

Scoring a couple of tenants “gives a developer like us the confidence and the ability to underwrite the financing for an office building,” he said.

The third project is a 185-unit apartment and condo project on Cimino Drive, the street that fronts America the Beautiful Park.

Retail space will be a component of all these projects, Finn said. Parking is another critical feature of each building.

Parking will be built on site as part of the apartment/condo project, Finn said, similar to what Nor’wood has constructed at other projects such as the 333 ECO and Cascade apartments. The office building will have parking underground.

“We are working with the city and their parking enterprise on a public parking garage associated with the Olympic museum and the activities that are south of downtown that would be collocated with the hotel project across the street from the museum on Vermijo,” he said.

The Olympic museum, one of four elements of the City for Champions project, “was the spark that put everything else in motion,” said Bob Cope, the city’s economic development manager.

What’s more, “we’re seeing additional development all around downtown, based upon what people know is happening in southwest downtown,” Cope said.

“So you have the Cascade Apartments that are almost finished,” he said. “You have the Marriott on Tejon and Costilla. You have the Casa Mundi apartments right next to that. Blue Dot [Place apartments] have been completed for a while, but I know that the approval of the Olympic museum had a lot to do with that. And the ECO apartments, same story — those wouldn’t have happened without the catalytic spark of the Olympic Museum.”

The redevelopment and revitalization of downtown was envisioned in the Downtown Master Plan, Project 6035 and many other plans and studies through the past couple of decades.

“A lot of hard work has gone into it, but our citizens today are seeing the reality of that revitalization and that vision becoming real,” Cope said.

“Colorado Springs is becoming a really top-tier community,” he said. “We’ve been lagging behind other communities like Denver that have really fully developed downtowns. We’re just catching up, but it’s important when it comes to attracting young, talented workers that want to work and live in a vibrant, active environment. And now we’re able to provide that.”