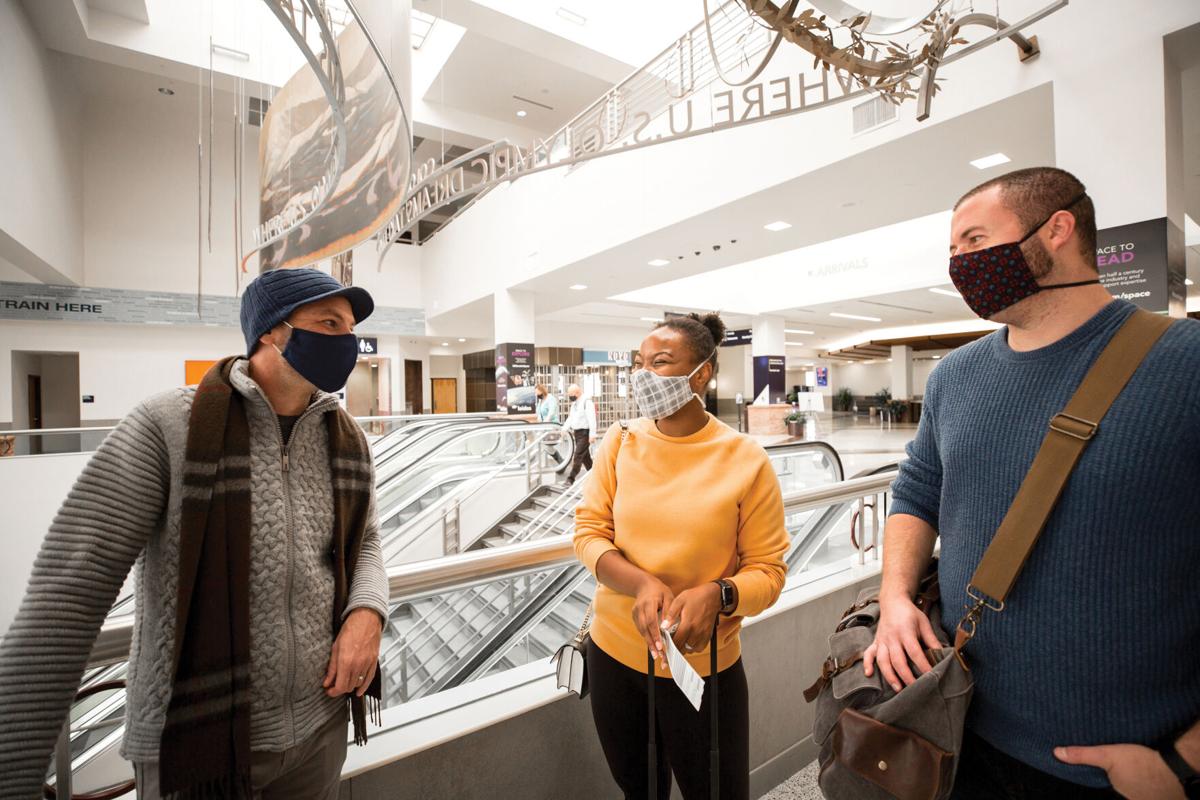 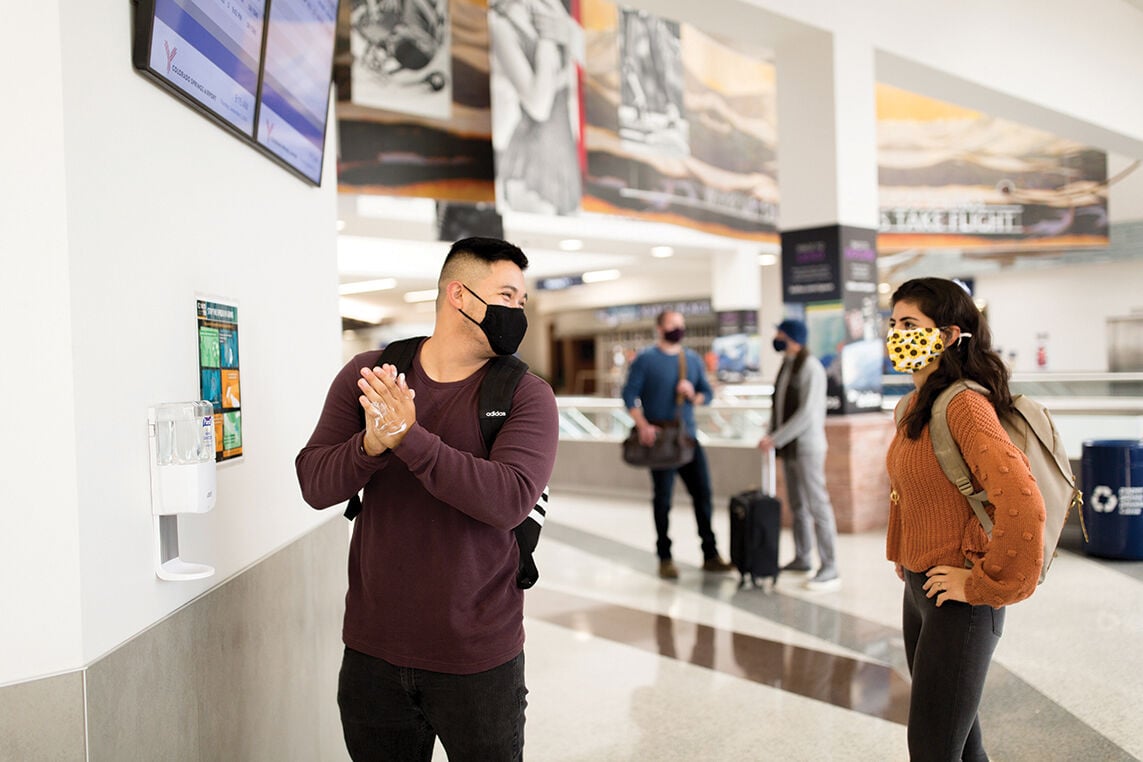 Studies have found airplanes are relatively safe, but airports?

Heading into 2020, Colorado Springs Airport was anticipating a banner year.

Projections looked good through January and February, Director of Aviation Greg Phillips said, when enplanements were up almost 10 percent — but then came the COVID-19 pandemic.

“Well then the bottom fell out in March,” Phillips said. “We saw the lowest numbers that we’d seen in decades and maybe since commercial service started in Colorado Springs.”

Traffic, enplanements and revenue have suffered heavily as the aviation industry has been hit hard by the pandemic, but conditions in recent months have been improving.

The holiday season — typically among the busiest times for airlines — is fast approaching. And the addition of Southwest Airlines, which will begin air service in March, should help buoy the airport’s recovery in 2021 and beyond.

But with COVID-19 cases rising across the country and many travelers still tentative to fly, Phillips said COS has tempered expectations.

Beginning in April, Phillips said COS traveler numbers were less than 10 percent of what the airport is accustomed to.

May and June weren’t much better, but July came with a significant increase.

“Since that time we’ve stabilized at about between 40 and 42 percent of what our numbers were in 2019 for the same time period,” Phillips said.

But things could have been worse.

Phillips said the actions COS took before and in the early days of the pandemic have been its saving grace.

“In April, when we saw the direction this was headed and we saw our numbers drop so precipitously, we immediately sat down, looked at our budget and looked operationally across every department at where we could cut expenses,” Phillips said.

COS cut $2.1 million in operational expenses, as well as nearly $6 million in capital projects.

The airport also got a significant boost from the Coronavirus Aid, Relief, and Economic Security Act, which gave COS $24.3 million in funding.

Given the current uncertainty across the industry, Phillips said COS has spread out its CARES Act funding over three years, with about $9.5 million allocated for 2020, approximately the same amount for 2021, and about $5 million for 2022.

“Certainly we hope that by 2022 there will be some kind of new normal and that numbers will be at least close to, if not back to 2019,” he said.

Phillips said it’s also been a major benefit that the airport paid off all of its debt in 2018, save for some low interest infrastructure bank loans from the state.

“And we had 535 days cash on hand when we started this mess,” Phillips said. “So we’re fortunate in that way. That doesn’t mean we’re out of the water, but we’re fortunate that our budget was strong and that we immediately went in to make cuts.”

Even with conditions improving, there’s concern about what the coming months will bring as COVID-19 cases surge across the country.

If passenger numbers decline, Phillips expects the drop would be significantly less than in the early months of the pandemic as travelers have become more savvy and less worried as time wears on.

One of the major challenges airports have faced during the pandemic is convincing people that flying is safe, but recent studies are helping to get the word out.

“The Harvard study just came out and it talked about the air circulation systems in airplanes and how every two to four minutes, the air is completely replaced in the cabin of an aircraft. And that’s twice as fast as it is in an operating room,” Phillips said. “So an airplane may literally be the most safe public space someone can be in.”

But air ventilation systems don’t completely eliminate risk and current guidance from the state does not recommend non-essential travel.

In an email, a spokesperson for the Colorado State Emergency Operations Center said that because air travel requires spending time in security lines and airport terminals, bringing people in close contact to one another and with high-touch surfaces, it “may increase your chance of getting COVID-19.”

Getting back to pre-pandemic traveler volume, Phillips said, comes down to consumer confidence, especially since every state is handling the pandemic differently.

“So all those things have to have to resolve themselves. And I think that this is just something that people are going to sort of tiptoe back into the market. We’re just going to make sure that we’re doing our part.”

In a non-pandemic year, the week of the Thanksgiving holiday is typically  COS’ busiest and traffic jumps leading up to Christmas.

Phillips said COS is beginning to see signs of increased passenger numbers as the holidays approach.

“The holidays, over the actual holiday periods, are going to be up,” Phillips said. “We expect it’s likely that the number of passengers will increase commensurately. … But I certainly can’t say the numbers will be the same as they were last year.”

And it’s not only people flying out of Colorado Springs that will be impacted by current conditions, but also out-of-town travelers and tourists visiting the city for the holidays.

Doug Price, CEO and president of Visit Colorado Springs, said Colorado Springs and the Pikes Peak region have been “top of mind” for visitors traveling for the holidays, adding that the city was recently included at the top of The Oprah Magazine’s list of 22 best holiday getaways this winter.

“With COVID cases rising in our county and across the nation, we don’t expect to see as many holiday travelers as in previous years,” Price said. “However, our region is still offering a variety of outdoor and socially-distanced holiday activities.”

Phillips said it’s a “little painful” for Colorado Springs Airport to be excited about holiday months in which airport business is only 50 percent below normal.

“But it is improvement,” Phillips said. “And we have to be happy about that.”

When the pandemic began, Phillips said COS came up with conservative estimates about its expectations for the pandemic.

They predicted they’d be down 90 percent in enplanements from April through June and improve to about 50 percent down through the remainder of the year.

“So our conservative estimate has carried us through the year and we didn’t have to hit our worst-case estimate, thank goodness.”

In late October, Southwest Airlines announced it will begin service at COS during the first half of 2021, with services beginning March 11.

“What you’re getting is a whole new network of cities and flights that we never had before, because we’re getting a whole new carrier and Southwest is the largest, by passengers, domestic carrier in the country,” Phillips said.

“It is improvement, and we have to be happy about that.”

“So what that means is, if you look at those five destinations and then look at the route maps … you have almost endless opportunities with one stop, max, to get to almost every city they serve in the U.S., Mexico and the Caribbean.”

Having a new carrier at COS will drive competition, Phillips said, and should result in lower fares for travelers.

And the new carrier is expected to significantly boost airport revenue.

Even with reduced capacities and a shortened year for Southwest, Phillips said COS anticipates 300,000-400,000 additional enplanements in 2021, which will translate to $3.5-$4 million in additional revenue.

Price said the addition of Southwest not only addresses long-time requests from COS customers for additional flights and reduced fares, but should also help boost tourism in the years ahead.

“The arrival of Southwest means more flights and more affordable options, making COS even more convenient and hassle-free for residents as well as visitors, convention attendees and business travelers,” Price said.

“The new COS service will complement Southwest’s service in Denver and provide convenient access to the full Southwest network with new options that didn’t previously exist. We anticipate a boost to the local tourism economy with increased use of the COS Airport.”

Price said there will be a ripple effect that provides benefits to local hotels, restaurants, activities, attractions and service providers, and that Southwest “allows our region to reach a new sector of visitors and residents who exclusively use Southwest as their airline of choice and didn’t previously book through COS.”