Skip to main content
You have permission to edit this article.
Edit
Home
News
Profiles
Opinion
Local Events
Awards
Book of Lists
About Us
Digital Edition
And More...
Share This
1 of 2 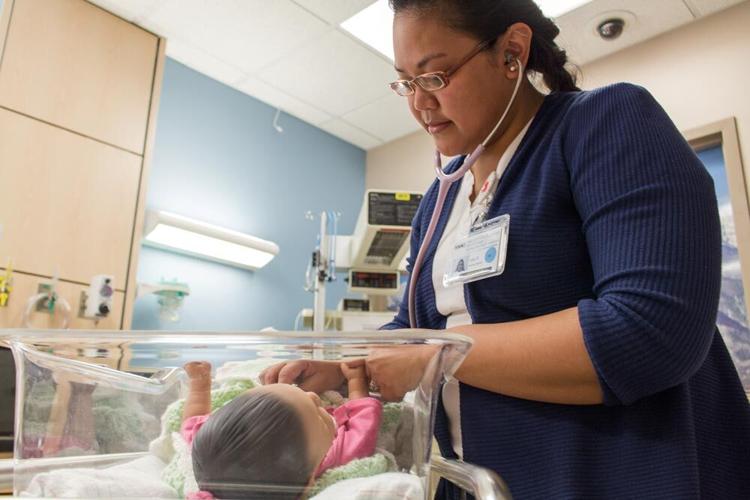 Joey Dumon, a senior at the Beth-El College of Nursing and Health Sciences at UCCS, works in the school’s simulation lab. Technology investments have allowed the school to streamline coursework for students both in the city and in rural areas, allowing them to enter the workforce more quickly. Estimates are the state could see a shortage of 17,000 nurses in coming years. 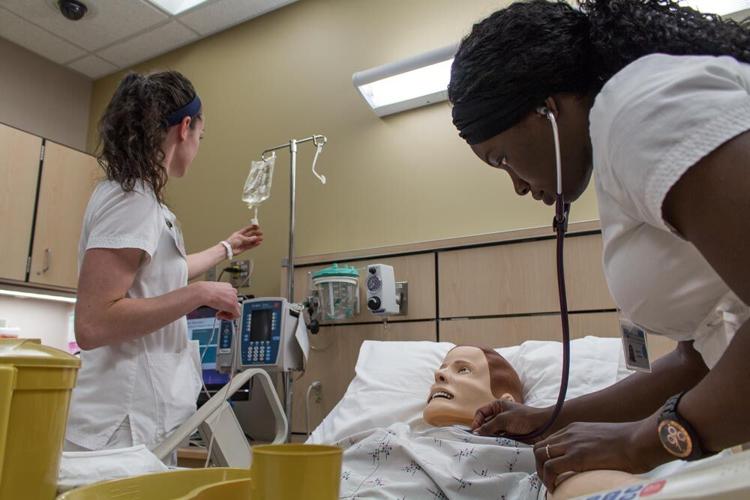 While the nation’s nursing workforce is on track to exceed demand during the next 10 years, at least one report predicts Colorado will be short about 17,000 licensed practical and registered nurses by the year 2025.

That conclusion was presented in a December 2014 assessment, “The Future of the Nursing Workforce: National- and State-Level Projections, 2012-2025,” issued by the U.S. Department of Health and Human Services.

Local experts say while rural areas may be the hardest hit, bigger cities will likely also feel the pinch, especially regarding specialty nurses.

“We’re finding now a tremendous maldistribution of nurses — that’s across the board and across all health care providers,” said Ingrid Johnson, project director with the Colorado Center for Nursing Excellence, a nonprofit workforce-focused organization that coordinates with more than 175 clinical and educational partners across the state.

Many entry-level nursing positions are easily filled by adequate numbers of new graduates, but Johnson said a gap is growing among older, more experienced nurses, particularly among educational faculty and those with experience in operating rooms, neonatal intensive care units, and labor and delivery.

Memorial Health System has experienced shortages in specialty nursing positions, said Kay Miller, chief nursing officer. The local system typically has around 1,000 positions for RNs, and 43 positions were open as of this week. Memorial hires about 60 new graduates a year, but there has been a need “to grow our own” specialty nurses, she said.

“We look nationally to get a nice mix from different programs across the country,” Miller said. “This is still a great area to recruit to. We have new graduates from Maryland to Montana, but many come from the local area.”

While some systems rely on traveling nurses to fill gaps, their compensation can be more than double an established nurse’s pay, she said. Instead of paying more money for temporary help, Memorial relies on expanded in-house education and ongoing staff development, Miller said. The system is partnering with schools to see if specialized nursing can be integrated into the basic curriculum.

“Research by the Health Services and Research Administration predicts nursing shortages over the next 10 years, and it’s important for Penrose-St. Francis to prepare for the future by establishing dynamic partnerships with local universities and colleges to build a pipeline of nursing professionals,” Latney said.

Rose Ann Scibona, vice president of nursing services for Penrose Hospital, said one of those relationships has been ongoing for a decade.

“Penrose-St. Francis has had an active and fruitful partnership with UCCS through the Beth-El College of Nursing Penrose Scholarship, which has awarded over $1 million to supplement third- and fourth-year nursing students’ tuition and expenses,” she said.  “Penrose-St. Francis also supports a number of nursing schools by providing clinical rotations on a variety of shifts to help both nursing students as well as RNs returning to work from RN refresher programs to obtain very important clinical skills, further preparing them to join the workforce.”

Nancy Smith, dean of the Helen and Arthur E. Johnson Beth-El College of Nursing and Health Sciences at the UCCS campus, meets several times a year with nursing officers at major health care agencies. One of the greatest hurdles the state will encounter regarding nursing will be finding an adequate number of qualified teaching faculty, she said.

“There’s a 25 percent shortage in nursing faculty in the state,” Smith said, adding Beth-El has four to five open faculty positions a year.

To help address the issue, Beth-El has streamlined nursing programs throughout Southern Colorado, she said.

“You have to have a minimum of a master’s degree to be nursing faculty in Colorado,” Smith said. “It takes a long time to get that done and meanwhile the shortage gets worse.”

To make the most of its existing faculty, the school offers a concurrent enrollment program with rural community colleges that allows them to get a bachelor’s degree more quickly.

“The first graduate was from Lamar, and she graduated in May with an associate’s degree and got her bachelor’s from UCCS in August,” Smith said.

“She was in the workforce within three years of starting school.”

Nursing situation at a glance

Despite the numbers, Smith said there’s little to worry about. The statistics predicting a nursing shortage in the state are alarmist, she said, adding that the quality of nursing care in 10 years will be superior.

“We’re doing things to incent the best and brightest,” she said. “The lowest GPA in our program is a 3.6.”

Smith said the school has a 100-percent hiring rate for those who want jobs upon graduation, and the majority of those job-seekers remain in the region.

There are ways to alleviate the nursing shortage without relying solely on new nurses, according to Katey Castilla, director of home health at The Independence Center. The center recently purchased the Front Range Nurse Aide Training Program in Colorado Springs.

According to Castilla, many in the program use certified nursing assistant training as a stepping stone to the nursing profession.

“It’s great training for people who want to go on in the medical field,” she said. “Many nurses were CNAs first. I think it makes for better caregivers because they’ve been in the dirt and moved up. They’ve developed compassion and understanding.”

There are about 100 hours of coursework required to become a CNA, and students are given both classroom and clinical instruction. Castilla said CNAs make about $12 an hour and many are hired to care for their own family members.

“Our community will benefit from this because it will continue to offer training for people wanting to enter the health care industry as CNAs; it will offer training to people who care for their own family members with a Medicaid waiver so they can become qualified to be a paid caregiver through Medicaid for their family member with a disability,” said Jessica TenBrink, spokeswoman for The Independence Center.

Just as nurses have taken over some physician responsibilities to supplement the shortage of family practice doctors, CNAs can be trained for additional responsibilities, Castilla said.

“More nurses are getting their master’s degrees and moving into nurse practitioner positions to fill gaps because there aren’t enough MDs,” she said. “I think, as we continue, we’ll see more changes based upon need.”