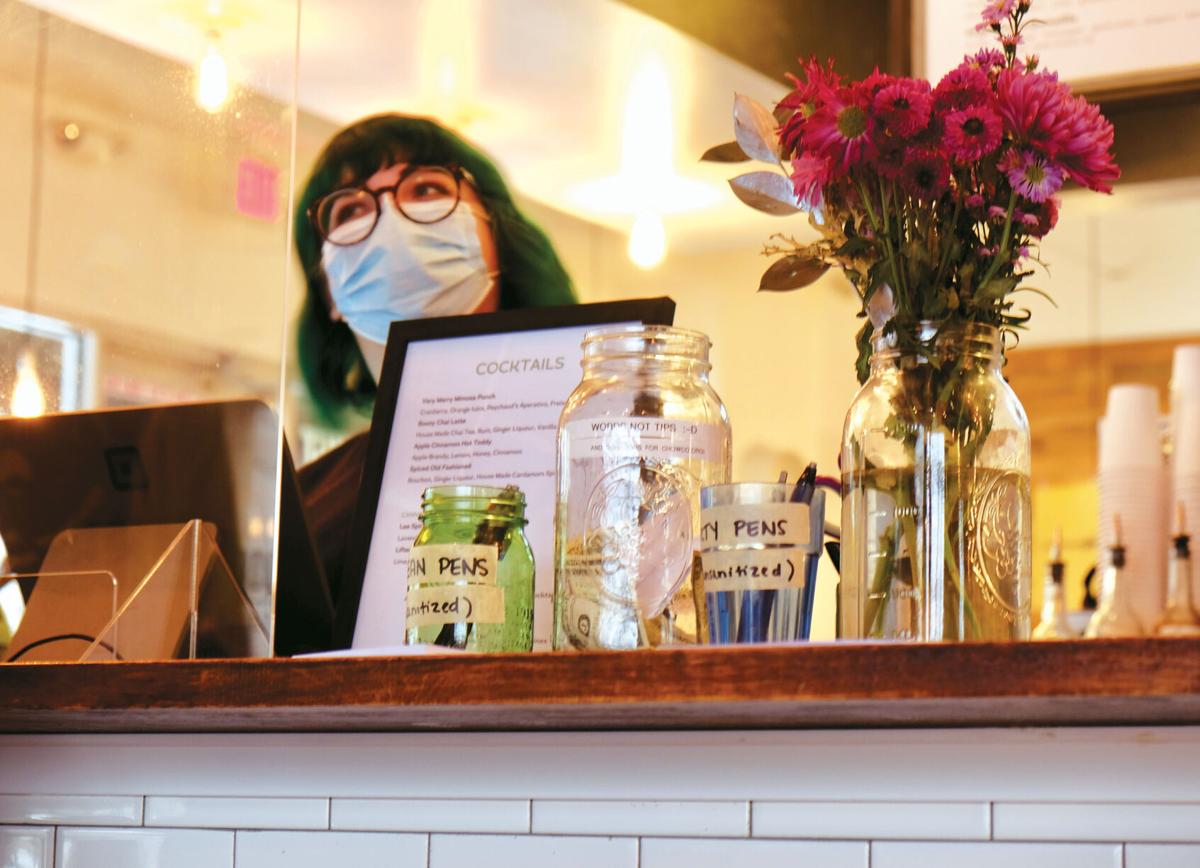 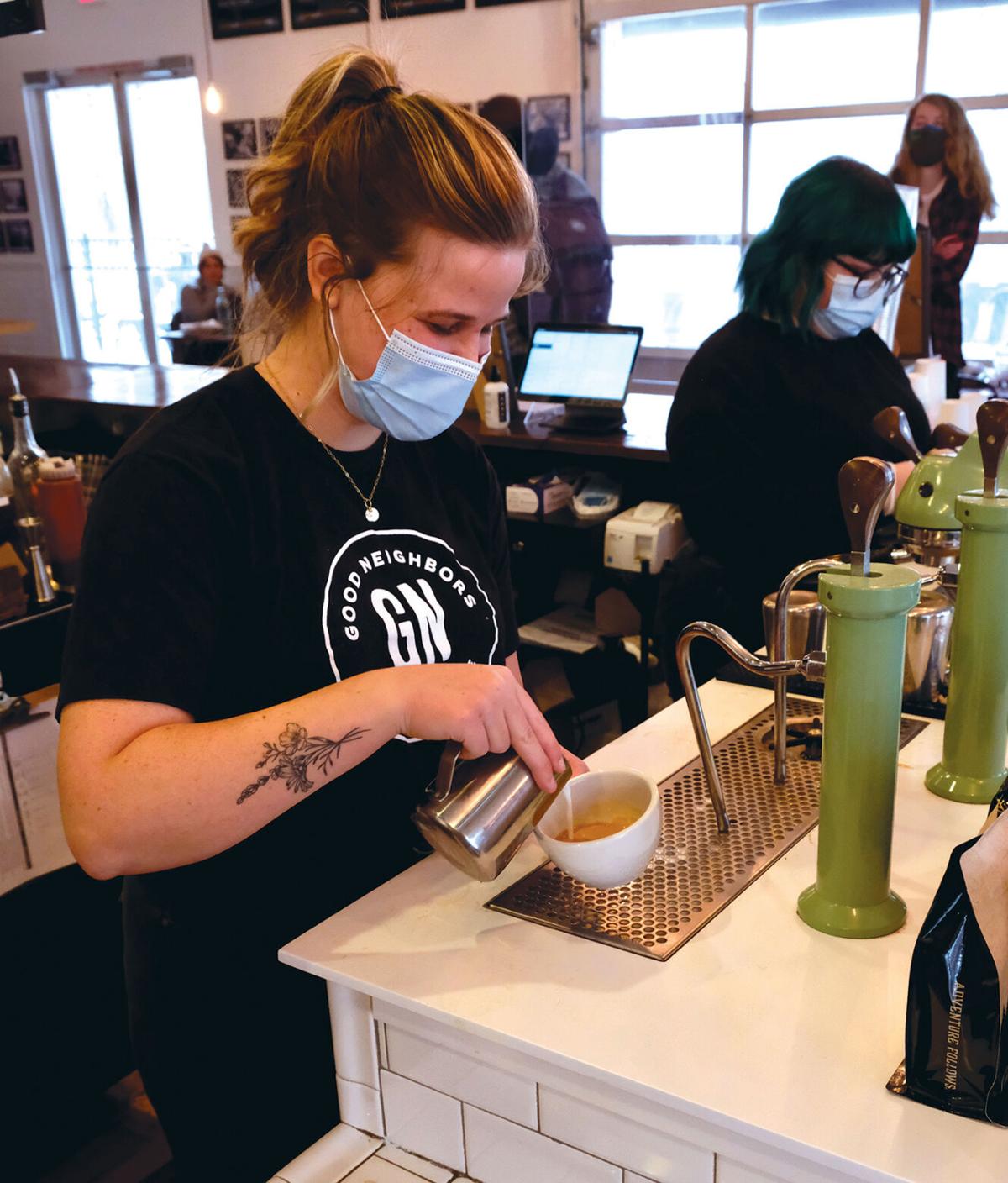 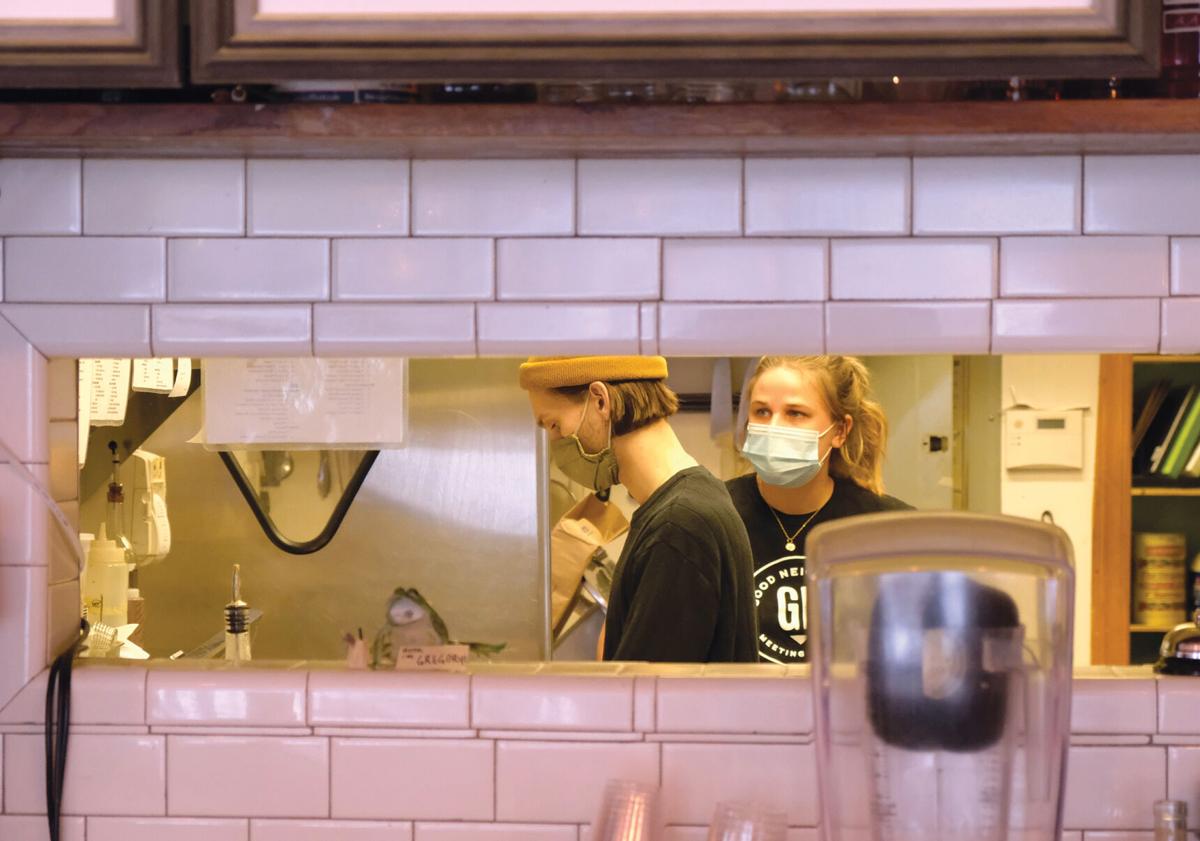 All employees at Good Neighbors Meeting House work both the front and back of the café.

Yemi Mobolade and Russ Ware founded Wild Goose Meeting House and Good Neighbors Meeting House with an eye toward doing something different in the restaurant business. Now, after facing criticism from employees over their tip-sharing model, they’ve adapted in a way that, again, bucks convention.

“When we first started the Goose, the idea of having no tipping at all was actually something we discussed quite a bit,” said Ware, sitting with Mobolade at Good Neighbors on a busy Saturday morning. “That was seven years ago, and there were some pioneers at that point that were doing some things around the country, and we decided the timing wasn’t right. We weren’t brave enough at that time. So instead, we do what a lot of cafés do and we did kind of the normal typical thing with tip sharing. For us, we’ve always shared it with our full staff.”

Jan. 9 marked Mobolade and Ware’s ninth day of tip-free service, a common practice across Europe, and in Australia and other countries, where leaving extra money on the counter can seem as out of place as going behind the bar and pouring your own pint. Meanwhile, tipping has remained the standard in the United States.

“Tipping is an ingrained part of American dining culture,” said Sonia Riggs, president and chief executive officer at the Colorado Restaurant Association. “Restaurants that try to eliminate tipping by going to a service charge model or another pay model usually report at least some resistance from customers that wish to have discretion over their tip …”

In order to change their tipping model, Ware and Mobolade have experimented with increasing menu prices 15 percent at Good Neighbors [Wild Goose has been temporarily closed] to include a service charge that accommodates the increased wages they are now paying hourly employees: $16.50 for existing employees and $16 for new hires. Signs posted around the café explain the new system to avoid any confusion about the price hikes. A jar on the table where tips might previously have gone now collects donations for a local charity.

But their experiment in the new system was born out of what appears to have been equal parts innovative spirit and necessity — combined with no small amount of drama.

From the front of the house to the back, Mobolade and Ware last year were paying their hourly employees $9 an hour, or two cents above minimum wage for tipped staff in the state. Tips left by customers were then distributed among everyone, coming out to around $6.50 per person, for a total of $15.50 an hour.

In October, around 17 employees from Wild Goose and Good Neighbors signed on to a list of concerns and picketed with dozens of others outside Wild Goose, in part over the question of whether the tip pooling system then in place was in line with state labor laws. Two employees, including Michael Smith, a former Wild Goose bartender, claimed they were terminated for leading the charge. The owners, however, have maintained that the firings were unrelated.

To Ware and Mobolade, the system was legal since they say all of their staff had been trained to work the front, the back and the floor of either restaurant during their shifts. Some employees raised the question of whether tip-pooling at Good Neighbors and Wild Goose was, at best, a misinterpretation of what employees were actually doing on shift, and at worst, a money-saving scheme that allowed the owners to avoid paying minimum wage.

“The tip pooling laws are interesting,” said Ware, “... and we’ve kind of known how we felt like we were defined in that context and we’ve obviously probed that a lot more in the last few months.”

They didn’t do it alone either. Following the October controversy, Mobolade said they hired and consulted with various attorneys about how to move forward in a way that was legal, financially feasible and ensured they would “move staff forward,” which he says is one of their core business tenets and a principle he also maintains as the Small Business Development Administrator for the city of Colorado Springs.

“There are things we could have done that would have erased any questions about compliance that would have paid everybody less,” Ware added. “Those options are out there, but any change we make, especially since it was driven by staff concerns in the first place, we need to make sure that we’re moving their pay forward.”

So far, employees at Good Neighbors say they appreciate earning a consistent wage, even if they might earn a little less during their busiest periods.

“It’s really hard working in this industry just because of the inconsistency in income,” said Bethany Joyce Royalty, who was working on Saturday. “I’ve never been able to set up a budget before. So now I’ll have a consistent income that I know what it’s going to be. It’s nicer because we get really consistent hours, so I know what my paycheck is going to look like. Whereas, I’ve worked in the industry in the last four years and I’m used to just losing the majority of my income in the winter time because everything slows down, you know?”

“We need to make sure that we’re moving their pay forward.”

Riggs said that not all employees — especially those who work directly with customers and tend to rake in lots of tips — see it that way, as their hourly earnings can plummet.

“American servers like tipping because they generally take home more money with this model — according to our data, servers take home an average of nearly $25 an hour in Colorado thanks to tipping,” she said. “Cities that have attempted to eliminate tipping have faced fierce blowback from waiters and bartenders. … That being said, what is more beneficial for service workers depends entirely on the model itself — as we’ve seen various options for tip-pooling models out there. What works well for one restaurant and their employees may not make sense for another.”

Traditionally, the theory has been that tipping is a means for customers to reward excellent service. Removing that mechanism could therefore also remove an incentive to perform. But Royalty said that hasn’t always been her experience. She echoed comments Ware and Mobolade made last fall, when they said that tips aren’t always awarded for the right reasons.

“I definitely notice a difference in the tips that I make if I’m wearing makeup or not,” Royalty said. “And I don’t think it’s anything people do consciously or maliciously, but it’s just nice to know that’s not going to be a thing anymore.”

Ana Brueggemann, another employee at Good Neighbors, said she supports both her bosses as well as the employees who were critical of their tip pooling system last fall.

“I totally stand by the call for a fair wage, and if they were doing anything wrong, that needed to come to light,” she said as she made a latté. “But I feel like the owners are really understanding and taking it in stride. Doing the no-tip system is their way of saying, ‘We’re here for you and it’s going to be OK.’”

Will businesses be open at 100 percent capacity this summer?