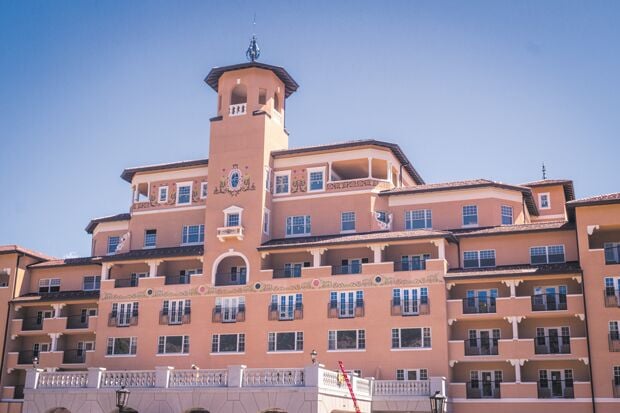 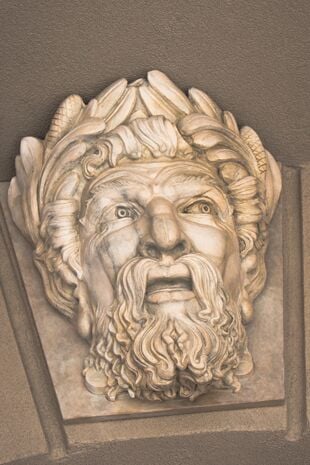 Even decorative flourishes such as this outside the entrance to Broadmoor West embrace the overall style.

On the afternoon of May 16, Broadmoor owner Philip Anschutz’s wife Nancy will christen a re-imagined Broadmoor West with the crack of a champagne bottle, much like the way Julie Penrose did when her husband Spencer Penrose opened the resort’s main building in 1918.

After more than six months and $57 million spent to redesign and renovate the resort’s west wing, the facility is being prepared to emerge with 31 additional rooms, two new restaurants and the aesthetic quality to match that of its historic campus.

The project brings The Broadmoor’s room count to 779 and is the largest component of a $100 million master plan to further the vision of entrepreneur and philanthropist Spencer “Spec” Penrose, who founded the resort nearly a century ago.

“The resorts and hotels that really stand the test of time are constantly evolving,” President and CEO Steve Bartolin said. “You always have to give people something new to talk about — something new in the marketplace — while keeping a careful eye on the past … and with quality that befits the rest of the property.”

Work on Broadmoor West began in November. Crews have since worked around the clock to ensure a timely completion before the busy summer season and attention to the impeccable detail characteristic of the luxury brand.

The rooms vary in size — all 85 are 200 square feet larger than before — and detail, but all offer handpicked furnishings from around the world and picturesque views of the Front Range or Cheyenne Lake, Bartolin said.

Some of the most notable changes to the building’s outward appearance are attributed to the creation of a three-story tower on its top, which made room for four new penthouse suites, and two grand entryways from the west and the east.

“The Broadmoor West was our least expensive room category — with this transition, they’ve become our premium rooms,” Bartolin said. “When the building inspector came through, he said, ‘Steve, no one makes buildings like this anymore.’ And they really don’t. … This thing is built to last forever.”

That was the goal of Cindy Johnson and David Fritz, whose Englewood-based company Johnson David Interiors has provided interior design services to The Broadmoor for 17 years. Perhaps their most demanding job with the resort thus far, the duo recreated the guest-room scheme, created signature spaces and added classical flourishes, and ultimately gave The Broadmoor West an Italianate style.

“[Philip Anschutz] asked us to bring some of the elements and the atmosphere from the main building,” Johnson said, referencing the hand-painted beams, artistic ceiling panels and meticulous masonry/and millwork. “There aren’t very many projects in today’s construction world that allow you to do that.”

The duo said the project was all about “keeping with the Broadmoor’s history” and retaining its “expected look,” while introducing 21st century, high-tech updates, including guest-room amenities such as illuminating bathroom mirrors with built-in TVs.

“Great resorts like The Broadmoor evolve — they change over time,” she said. “It is also very important that it evolve and change to entice guests to come back and see what is new.”

Wisconsin-based Conrad Schmitt Studios Inc., worked with the designers to create all the painted and molded elements throughout the hotel. The company specializes in the restoration of old, finely detailed churches and cathedrals.

The building will also play host to a large exhibition of artwork from the Anschutz collection, which is housed at The Navarre in Denver.

“There are both high-end replicas and originals throughout the building,” said Darlene Dueck, curator of the American Museum of Western Art in Denver. “These paintings and replicas are Western and they speak to the history of the development of art as it pertains to Colorado and the West.”

Dueck, who functions as curator for The Broadmoor West, said the pieces on display in several “breakout rooms,” as she called them, will play host to a number of works from the same artist.

The Broadmoor West exhibition will feature both works that are new to the building as well as those displayed on its walls in the years leading up to its closure for renovation.

Though the opening of Broadmoor West’s two signature restaurants — Ristorante del Lago and Natural Epicurean — will lag behind its opening slightly, Bartolin said they should be quite the draw for tourists and area residents alike.

Ristorante del Lago, an authentic Italian restaurant and bar designed by New York firm Tihany Design, sits on the west bank of Cheyenne Lake in the former home of Charles Court. When it opens May 19, the restaurant, adjoining bar and outdoor patio will have the capacity for more than 200 guests, according to Bartolin.

Prior to the development of the restaurant, chef de cuisine Justin Miller traveled to eight culinary regions of Italy to source foods and wines and to help create a menu true to the country’s warm culture.

Along with a purely Italian menu, the decor exudes the Mediterranean country’s culture, with an enormous hand-crafted pizza oven, communal dining areas and an indoor patio outfitted with tiles pulled from a 130-year-old Tuscan villa, Bartolin said.

On the building’s northwest corner is Natural Epicurean. With a mantra of “healthy, wholesome, organic and natural,” the more casual restaurant will offer fresh and fit options with produce and herbs grown in its own gardens.

The more contemporary dining option will be ready for business June 18, Bartolin said.

“These two new restaurant offerings are bound to create some excitement,” he said. “Really good Italian food is timeless — it never goes out of style. … and I think we’re on the front end of something that will become a trend with the Natural Epicurean. I think that adds a lot to the equation.”

Broadmoor West was designed during what many consider to be a low point in American architecture: the 1970s. Originally drawn up by Carlisle Guy, the redesign was completed and administered by CSNA Architects, which has worked with The Broadmoor on a series of projects over the years.

Jim Johnson and his firm GE Johnson were awarded the bid to overhaul the facility that the company, then headed by Johnson’s father Gil, constructed for $8 million in 1975.

The architects, designers and construction crews worked together to breathe the breath of Whitney Warren and Charles Wetmore — whose New York firm designed the original Broadmoor hotel nearly a century ago — into the resort’s west side, welcoming it back into the regal Colorado Springs clan.

“Architecturally, that building was the one piece that did not look like a member of the family here on campus,” Bartolin said. “The building finally fits into the campus.”

Will businesses be open at 100 percent capacity this summer?