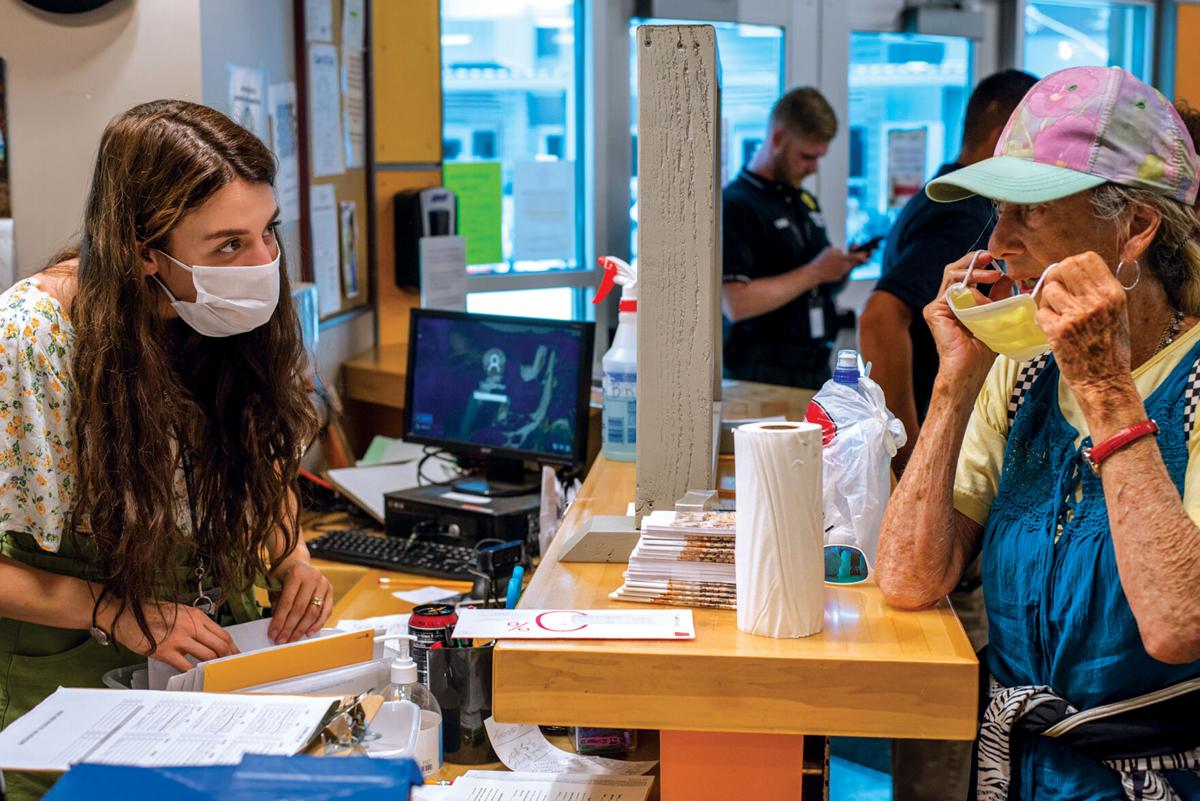 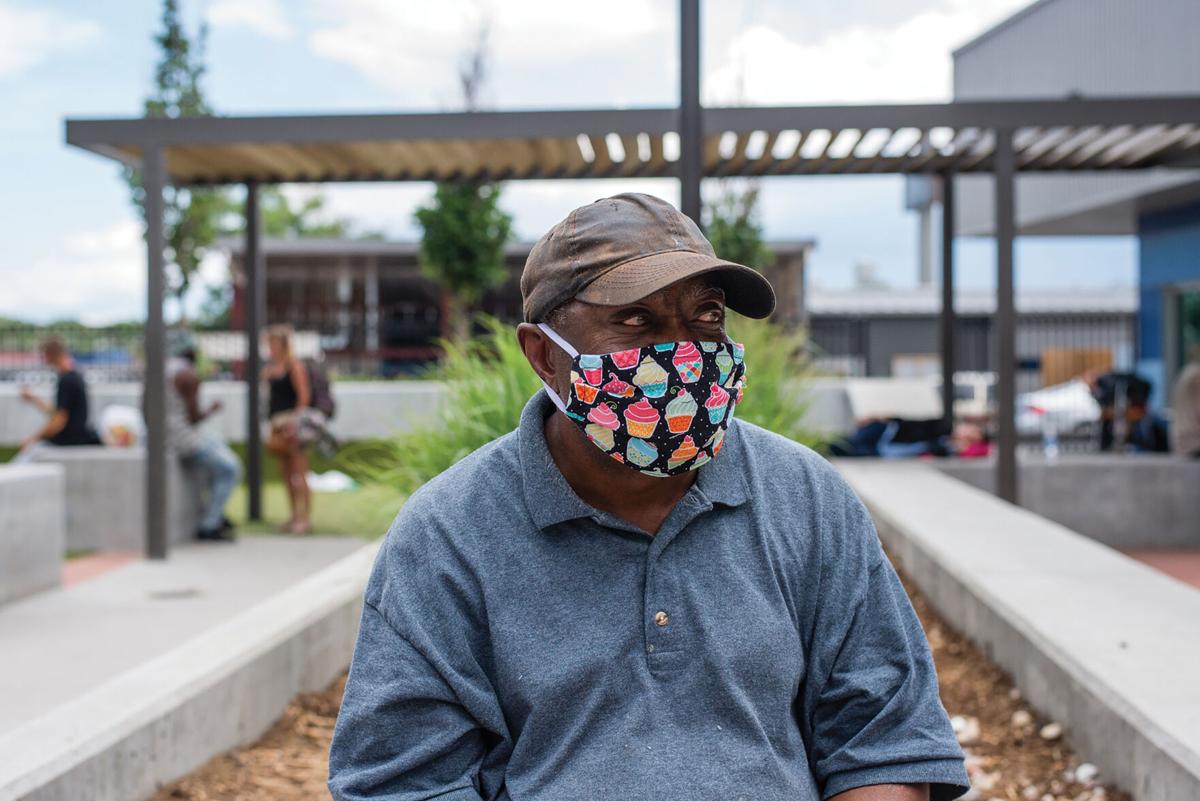 It may be inconvenient for people to stay home. It may be annoying not to be able to dine out at restaurants. But for homeless people, the COVID-19 pandemic is life-threatening.

“We realized pretty quickly just how much that population relied on drinking fountains and bathrooms, buildings like the library, and food that would be either left out for them by restaurants or that people would give them if they were downtown,” said Andy Barton, CEO of Catholic Charities.

People trying to escape homelessness who were enrolled in job training and life skills courses lost their access to these classes when they went virtual, as many did not have the means to connect to the internet.

Many of those who were working in service industries lost their jobs. Those who are looking for work are finding that the jobs they’re seeking are not available.

The homeless population does not appear to have grown significantly in the past year, according to the leaders of local charities.

Last year, the annual Point in Time count conducted in January tallied 1,339 people who identified themselves as homeless, including 358 unsheltered people, according to the Pikes Peak Continuum of Care, a local decision-making group with the goal of ending homelessness. That represented a decrease from 2018.

The unsheltered portion of the survey counting has been called off based on guidance from HUD around COVID-19 exposure. However, the survey will still be conducted to count the number of people staying in emergency shelters and transitional housing.

Regardless of the numbers, the pandemic has greatly increased pressure on agencies like Catholic Charities, Springs Rescue Mission and Homeward Pikes Peak to provide shelter, food and the means for people to lift themselves out of poverty and addiction.

Because of increased donations from businesses, nonprofits and individuals, as well as additional state and federal funding, those agencies have been able to step up their assistance to meet the greater needs and difficulties the pandemic has imposed.

“For the people we serve, the economic impact is just as devastating, if not more, than the health impact of COVID,” Barton said.

Barton said he does not think that has happened yet, because of the state’s eviction moratorium and the additional services agencies are providing.

“We’ve been really aggressive around providing eviction prevention assistance to folks,” he said. “Catholic Charities has provided close to $750,000, since the start of the pandemic, in rent assistance for folks to be able to keep them in their homes. … In a normal year, we might give out $50,000 in rent assistance.”

Catholic Charities has seen a significant increase in new applications for rent assistance, but the population it serves through the Marian House soup kitchen and other services, including health care, case management and employment assistance, has decreased.

“Our meals in particular have gone down, because we’ve had to follow the same guidelines as restaurants in the community,” Barton said.

When the dining area had to be completely shut down in March, the soup kitchen started distributing sack lunches. In late spring, to-go hot meals were served, and in summer, the dining area opened to serve a limited number of clients.

“With the most recent shutdowns in November, we went back to the to-go meals,” Barton said.

A surge in donations has enabled Catholic Charities to boost rent assistance and continue its other programs.

“We have seen an unbelievable outreach of support from individual donors and from foundations,” Barton said. Overall, donations have increased by about 10 percent in fiscal 2020 compared with 2019.

“The economic impact is just as devastating, if not more, than the health impact of COVID.”

The organization has also received more than $400,000 in additional funds through the Paycheck Protection Program and about $100,000 through other federal programs.

Catholic Charities assisted the city of Colorado Springs in setting up City Auditorium as an isolation shelter for homeless people experiencing symptoms of COVID-19.

That shelter is still being used, Barton said, but added, “I don’t think we saw the spread we expected among that population.”

“At this phase, the real focus for the community will be how do we make the vaccine available for that group and get it to them as quickly as possible,” Barton said. “It’s going to be more difficult [for them] to get access to vaccination than for someone who has a primary care doctor.”

The mission has seen the demand for its daytime services almost double since the beginning of the pandemic.

“We would typically see about 250 people per day” before COVID-19, said Travis Williams, chief development officer. “We’re seeing almost 500 people set foot on the campus during the daytime.”

The mission also serves 750-900 meals a day, provides other essential services such as showers and laundry and shelters about 300 people per night.

While many of the classes — from career training and life skills to art therapy — that the rescue mission offered had to be curtailed, “we’ve continued on in many respects, attempting to do everything that we were doing before the pandemic began,” Williams said.

Volunteers have not been allowed on campus during the pandemic, but the mission employs about 64 part- and full-time staff.

“Our staff has been able to lean in, ask questions, get to know people and point our homeless individuals to the best resources that there are,” he said. “We’ve still seen men and women graduate from job training classes. We’ve seen 15 to 20 individuals find better housing in the Colorado Springs community, so there still has been a lot of successes happening even through this pandemic.”

The mission has continued to partner with organizations like AspenPointe to provide services through virtual appointments. Clients who don’t have access to smartphones or computers can access virtual sessions on the campus, although availability is limited.

“Somebody who wants those services really has to be diligent about seeking them out,” Williams said.

The rescue mission has instituted stricter safety protocols since an outbreak of 15 COVID-19 cases linked to the residential men’s addiction recovery program began in October.

The mission has increased the frequency of daily cleaning and disinfecting throughout the campus, continued screening requirements and implemented head-to-toe sleeping in shelters. It is referring anyone with symptoms or positive tests to the City Auditorium isolation shelter.

“We will continue to take proactive measures while working daily to provide reliable shelter, meals and life-giving services to guests,” Williams stated in the release.

Its annual budget of nearly $14 million includes cash donations and gifts in kind such as food and clothing. Last year, funding was supported through federal and state grants.

“What surprised us the most is just how compassionate this community really became,” Williams said. “It’s been a humbling experience.”

Those in the formerly homeless group were particularly susceptible to misunderstandings about COVID-19, especially in the beginning, Roalstad said.

“We were fielding a lot of phone calls from clients who were confused and scared,” she said.

Because these people have extremely modest means, they were unable to get to the stores, and when they did, they found shelves empty of basic items like cleaning supplies and toilet paper.

“We stepped up and provided for their basic needs beyond what we normally do,” Roalstad said.

Many of the transitional housing residents, who pay a modest amount to cover their living costs, were employed in service industries and were furloughed or laid off.

Some of the outpatient treatment clients are housed and others reside in homeless shelters, Roadstad said. One of the biggest challenges in helping them was the transition to telehealth appointments.

“Some clients use public transportation or their car to get to a place where Wi-Fi is available,” she said. “Sometimes they would come to our parking lot and sit there, even though my clinician was working from home.”

Homeward Pikes Peak’s street outreach workers are continuing to access unhoused individuals, but in different ways than before the pandemic.

Instead of going into homeless camps and sometimes even entering tents, they now are setting up shop in parking lots near camps so homeless people can come to them.

“There still remains a lot of anxiety for our clients on their economic status and their health status,” Roalstad said.

It’s been hard for those without transportation to get COVID tests, because the sites are set up for drive-thru testing and not walk-ins.

“I still feel like there’s improvements that our community could make,” she said. “But in the end, I think that we have maintained a very high level of housing stability for our clients through this past year.”

Editor's note: This story has been updated with additional information on the Point in Time count.