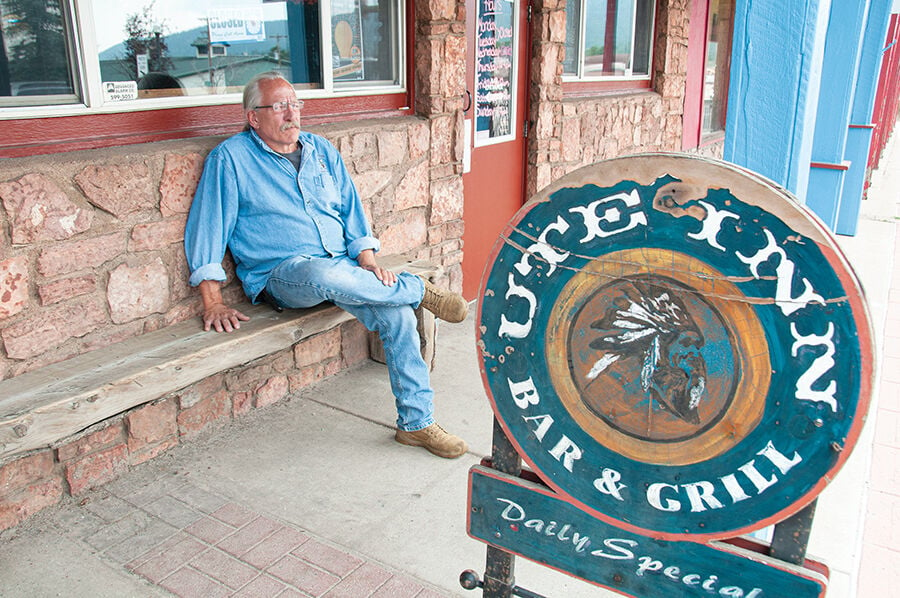 Elijah Murphy, owner of the Historic Ute Inn, is dealing with multiple economic challenges along with other businesses in Woodland Park. 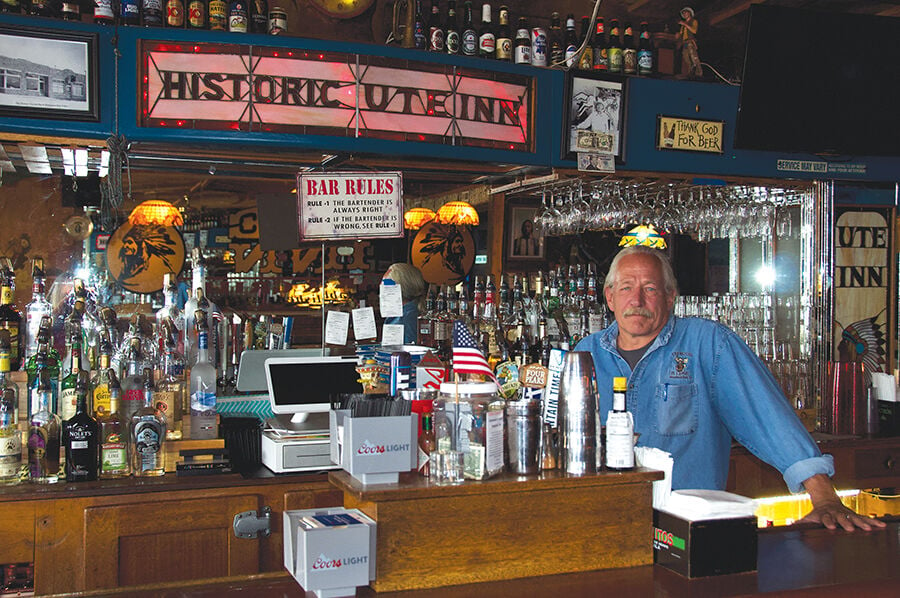 Elijah Murphy has been dealing with rising costs, lack of available help and lower revenue at his well-known Historic Ute Inn, now open only Thursdays through Sundays in downtown Woodland Park.

A sign on the front window of the Historic Ute Inn in Woodland Park reads: “Now Hiring! Help Wanted! Please Apply Inside.”

Owner Elijah Murphy isn’t the only one who’s posted such a sign. Nor is he the only business owner who has had to limit his hours of operation because of lack of staff.

“What’s killing the town right now is employment,” said Jerry Good, owner of Williams Log Cabin Furniture. “I’m to a point where if I don’t have somebody in here soon, I won’t be able to deliver my goods. If I can’t do that, I can’t sell stuff. People expect it to be delivered.”

Debbie Miller, president of the Greater Woodland Park Chamber of Commerce, said summer traffic is high, but the “City above the Clouds” suffers from the same worker shortages that afflict Colorado Springs, as well as lingering effects from the COVID-19 pandemic. It’s a crisis that affects businesses from big-box stores to mom-and-pop merchants, restaurants and bars.

“I’ve seen it where fast-food restaurants are having to close their indoor dining because they only have line cooks and people to be able to do the drive-through,” she said.

Miller described a number of reasons why employees aren’t coming back to these businesses — child-care shortages leave some parents unable to return to the workforce, for example — but Murphy and Good place the blame primarily on the additional unemployment benefits people are getting from the government.

With many businesses in survival mode, organizations like Woodland Park Main Street are doing what they can to promote the business community. And through the process of updating its comprehensive plan, the city is taking a long-range look at how it can revitalize the community as it emerges from the pandemic.

Murphy, who has owned the Historic Ute Inn since 2014, posted a poignant message on the inn’s Facebook page on July 28.

“We have made a tough decision. We will be closed Monday thru Wednesdays for the foreseeable future,” the statement said. “Due to a lack of staff we decided to consolidate the days we are open and this will hopefully prevent us having to close on any given day.

“We will still be having bands on Fridays and karaoke on Saturdays. We appreciate each and every one of our loyal customers and we hope the situation improves soon so we can resume normal operations. Thank you all for supporting us during these tough times.”

“And then the other piece is restaurant work. It is a job that can be hard at times. So who wants to do a low-paying job where they’re not going to make it?”

Like other restaurants in the region, Murphy has had to absorb a rise in food costs, saying, “I watched hamburger go up 35 percent one week, and then the next week, pork butt went up 54 percent.”

To top it all off, Murphy thinks this year’s tourist season was late kicking in and has been slower than normal.

The weight of all these factors means he isn’t sure if he’ll be able to hire people when the $300-per-week federal unemployment benefit expires Sept. 6.

Murphy had to put on hold his plans to purchase the building that houses the Ute Inn.

“I was in the process of filling out all the paperwork before all this happened and even while it’s going on,” he said. “I’m kind of at a loss for what we should really do.”

Like the Ute Inn, Williams Log Cabin Furniture is a legacy business that’s been around for a long time.

Good and his wife Vickie acquired the business and expanded the stock of rustic, lodge-style furniture after the original owner passed away in 2009.

Strong housing sales in the area have helped drive the furniture store’s sales this summer.

“Everybody’s cashing in on that ability to sell at a higher rate,” he said. “People want to live up here — who doesn’t want to have a cabin in the mountains? So we’re doing OK.”

On the other hand, “we don’t seem to be seeing as much foot traffic through the door as normal,” he said.

The store’s greatest need is for delivery help.

Good said he has a delivery person who has been with the store for 10 years and is looking for a part-time helper at $16.50 per hour.

“There’s strength in numbers when we band together.”

“We advertise on Facebook pages and local employment pages and word of mouth,” he said. “We hired four different people, and they last a day or so, and then they’re offered better positions and more full-time work.”

Apart from the ability to hire people, Good said he thinks there needs to be “more cohesive unity with the businesses, where we tend to support each other a little better,” he said. “There’s strength in numbers when we band together.”

He sees the Main Street program as a possible avenue for that to happen.

Organized in 2014, the Woodland Park Main Street program receives grant funding from the city and the state Department of Local Affairs.

In previous years, it has completed projects such as restoration of the kiosk and creation of rest area signage in Bergstrom Park.

For the past two years it has sponsored sidewalk sales that help to promote downtown merchants. The next one will take place Aug. 7, which coincides with the first day of the annual Mountain Arts Festival at the Ute Pass Cultural Center.

The chamber maintains a job center on its website and posts openings for Woodland Park businesses, Miller said.

“We work with the Pikes Peak Workforce Center,” she said. “They do virtual job fairs, and they come up and individually work with employers as well. We’re also looking at  different types of training upskilling. If an employer says, ‘We need this type of upskilling for an employee,’ we look at providing that or working with the Small Business Development Center or the Workforce Center to develop that for them.”

Miller, who sits on the Workforce Center’s board of directors, said the center is “gearing up for what they anticipate to potentially be an influx of people who are looking to get back in the workforce or to change career paths” when the extended unemployment benefits expire.

“But I don’t know that anyone has a true handle or forecast on what that’s going to be like,” she said.

In the first six months of 2021, Woodland Park saw $16 million worth of building activity ranging from fences and decks to new homes and duplexes, she said. That compares with $20 million for all of 2020.

“We’ve seen a surge in duplex development,” indicating a demand for that type of housing, Riley said.

Among the duplex projects are the Trailhead Townhomes, an 18-unit affordable housing project being developed by Habitat for Humanity of Teller County off Valley View Road. According to the project’s website, the goal is to make it easier for working people to live in Woodland Park.

Other projects, such as 12 units at Sundance at Shining Mountain, are targeted toward higher-end buyers.

Although there has not been significant new commercial development recently — the last one was Natural Grocers, Riley said — “we are seeing quite a bit of remodeling occurring in some of the smaller commercial buildings.”

The former Pizza Hut has been purchased by AJ’s Pizzeria Restaurant; owner Aaron Melvick plans a redesign and remodel that will add 506 square feet and an outdoor dining patio.

Riley said two new bars, Rhapsody and 110 Reserve, opened their doors recently on Midland Avenue and are offering new concepts to people who want to enjoy a meal or drink in a great setting.

“Both of them have outside patios,” Riley said. “I think what people are looking for is an experience where you feel like you’re in the mountains. We’re starting to see business owners take advantage of that.”

Riley said the city recently released a draft of Envision Woodland Park 2030, an update of the city’s comprehensive plan. The plan, which was drafted with input from more than 1,000 residents and business people, identifies opportunities and challenges to starting a business in Woodland Park.

Respondents expressed a desire for more experiential businesses such as restaurants, retail and entertainment to energize downtown.

The draft plan is posted at whatsupwoodlandpark.com, where residents and business people can review it and submit comments.

Will you spend more on gifts this holiday season than last?