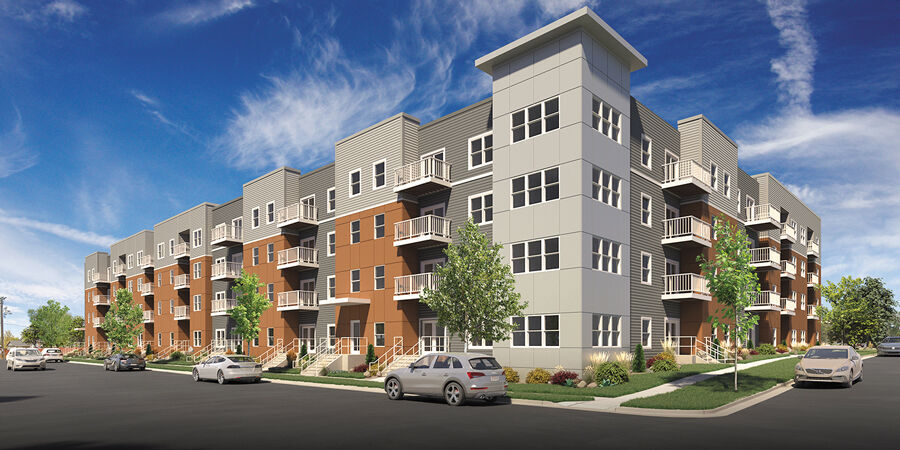 A rendering of The Village at Solid Rock.

Pastor Ben Anderson, executive director of Solid Rock Community Development Corporation, recently provided updates on The Village at Solid Rock, a new affordable housing project in Southeast Colorado Springs. He and Daryn Murphy, vice president of Commonwealth Development, hosted a community Zoom meeting in April to provide updates on the affordable housing project that will create 77 units of workforce housing at the northeast corner of Rainier and Arlington drives in the Pikes Peak Park neighborhood.

“Solid Rock Church purchased land probably 3½ years ago, and went through a series of discussions on how best to serve southeast Colorado Springs with the land,” said Anderson. “We’ve had multiple ideas, but we finally decided that the best way to serve southeast Colorado Springs was to build affordable housing. It was unanimous, we just felt this was the right thing to do as a church and it was the right thing for us to do as a community development corporation.”

The Village at Solid Rock is just one of a number of new housing developments in the works in the Southeast. Darsey Nicklasson’s 223-unit Mosaica development broke ground March 18, and Nicklasson has a proposed 150-unit development, Kaleidos, in the works for the area on Murray Boulevard between Fountain Boulevard and Chelton Road.

We finally decided that the best way to serve Southeast Colorado Springs was to build affordable housing.

Mission Trace Shopping Center is the site of a proposed 280-unit affordable housing development as part of a project with the Urban Renewal Authority. Bentley Commons, an affordable housing complex on Hancock Expressway just west of Academy Boulevard, recently announced plans to add 192 units to their existing site. Affordable housing is a growing concern in Colorado Springs. During the Mosaica groundbreaking, Mayor John Suthers emphasized his goal to build 1,000 units of affordable housing annually.

“The vision of the project is to develop high-quality housing that is affordable to residents of the community, to do so on surplus land that is off to the western side of the church,” Murphy said. “This is a joint venture between Commonwealth and Solid Rock Community Development Corp. We’re affordable housing developers, this is pretty much all we do. We’ve done a number of projects in Colorado. The property manager that we’re planning to use is Greccio housing; it’s a local nonprofit affordable housing operator and developer.”

So far the project has completed a rezoning process, for high-density multifamily housing, and secured funding from the Colorado Housing and Finance Authority.

“In terms of what’s next, we still have several months of design and engineering work to get the final design of the building and the site ready for submission to the city,” said Murphy. “We’re planning to replat the site, which is essentially to divide it into two parcels so the church can remain on the eastern side and we have a free site on the western side that’s its own parcel to develop this project. We have a lot of underwriting and final due diligence to do with the project funders. That would be city funders, state funders, private lenders and so forth. There’s quite a few that came together to make this project happen. Finally secure a building permit with the city of Colorado Springs so we can start construction.”

Murphy said construction should start in October and take approximately 14 months to complete.

The rents for units at The Village at Solid Rock will vary according to individual income levels.