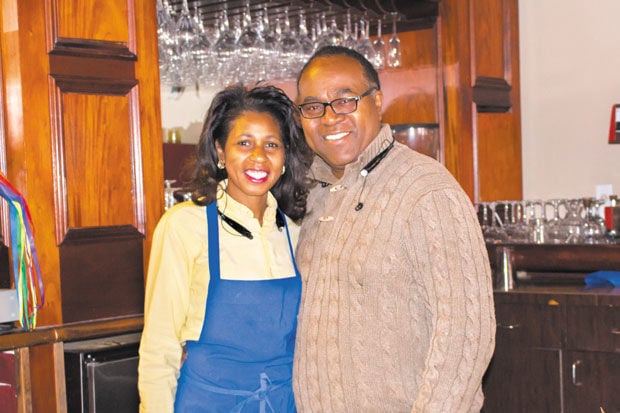 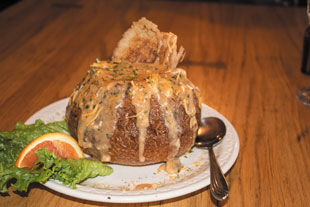 The clam chowder served in a bread bowl is a specialty item at the English Dockside West.

At his English Dockside West Seafood and Grill, English wants his patrons to leave with smiles on their faces.

“People often describe this food as happy food,” English said. “When you eat it, it just makes you feel good.”

The English Dockside Seafood and Grill recently moved across town from its original location at 2220 Academy Place (near Academy Boulevard and Maizeland) to 1201 W. Colorado Ave. on the Westside. The English family had operated the Academy location 10 years.

While there, a loyal following from the Westside kept encouraging them to move west.

After a time, English said the family felt “drawn to the Westside.”

The original plan was to leave the Academy location open while expanding west.

“It turned out, we just let God make it work. As God would have it, it worked out perfectly,” to move it all to the Westside and close the Academy Place location, English said. Also, the employees preferred to work out of the Westside restaurant, he said.

English had scouted the 1201 Colorado Ave. location for five years. During that time, Bill and Darlene Kennedy ate at the Academy English Dockside.

Then, when the Kennedys bought the real estate on Colorado Avenue, “It was like a match made in heaven,” English said of the families’ relationship.

The arrangement calls for the real estate to eventually transfer to the Englishes. The new location has 100 seats; that compares with 38 at the Academy Place site.

The roots of fish

The family was in California one Friday years ago when English asked his wife where she wanted to retire.

“She said, ‘I don’t care, as long as it’s in Colorado,’ ” English recalled, laughing. The following day they were on a plane, Colorado-bound.

“The next Saturday we had a contract on a house, and 30 days later, I was living here,” English said. “We really didn’t know much about the city.”

He and his family, wife Stephanie and the three youngest of their six children, Jasmine, Jamal and Breanna, launched into their next restaurant business, English Dockside.

English has been in the restaurant business for 30 years, having grown up in Mobile, Ala., and having honed his craft on what he caught in the Gulf of Mexico and on the bay.

“We used to catch crawfish. We’d play with them, have fun with them, and then we’d go cook them,” English said of his youth and the crawfish they would call mud bugs. “We couldn’t use seasonings, just salt and pepper.”

Now, English uses his own secret seasoning on his food.

“I developed my own seasoning when I started my first seafood restaurant, in Orlando,” said English. He does not divulge the recipe.

“Business is what I do, but food is my passion,” English said.

At English Dockside, appetizers range from a crab roll for $4, five oysters for $6, salads from $6 to $12, main meals of fish for $10, Walleye for $16, snow crab for $16, jumbo shrimp and blue crab meat rice for $18, a New York strip steak for $16, and chicken and waffle for $12. He also sells hamburgers, po-boy sandwiches and wings. The restaurant also has a liquor license, as of last week.

When asked what his favorite dish is, he will simply answer seafood.

“I never have been much of a meat eater. I cook it all, though,” English said.

The main ingredient in all his dishes, English insists, is love.

“You put love into the food, then you get love out of it. That’s just how it works,” English said.

His employees will ask how they can have a unique style of cooking if they’re cooking the same way English does.

He will choose employees based on how well they treat the customers.

“People have serious, serious problems. They don’t want to look at your gloomy face,” English said.

“They want you to bring joy to them. If you can’t do that, this isn’t the place for you.”