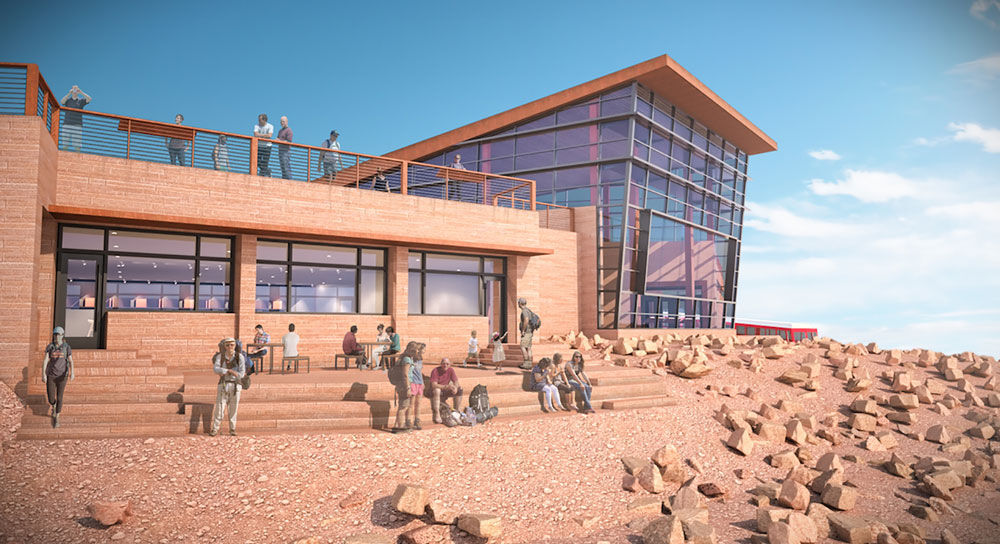 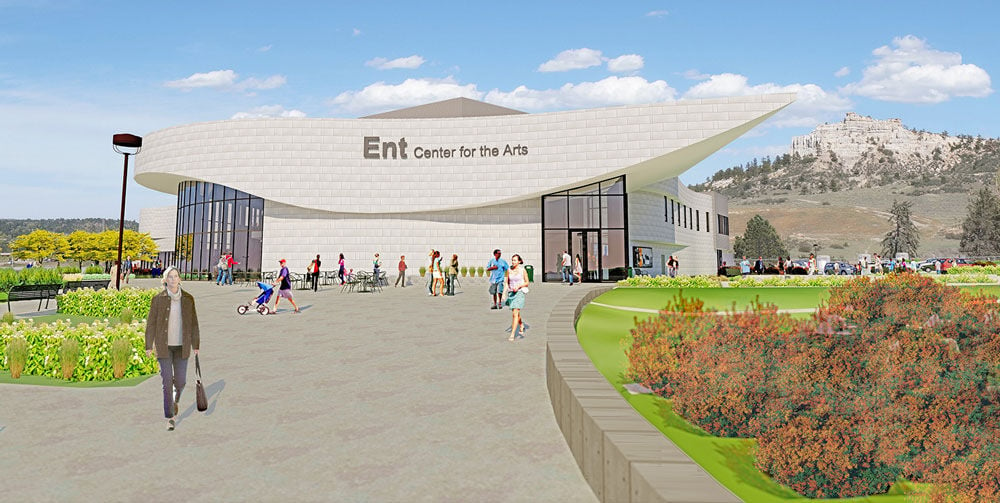 Take a look at the built landscape of Colorado Springs and the Pikes Peak region.

What you see — shopping malls, big-box stores, comfortable suburbs and cookie-cutter office complexes — could be anywhere in the American West. The goal, as Mayor John Suthers says, is to build a city worthy of our extraordinary setting, but we haven’t always succeeded.

It’s fair to say that creative, vibrant cities are in some measure defined by their buildings. In recent decades, business, political and nonprofit leaders have recreated Denver, scattering interesting new structures across the city. Imagine Denver now without its convention center, Coors Field, Pepsi Center, Sports Authority Field, the downtown library, the Museum of Contemporary Art, the reborn Union Station, the Hamilton wing of the Denver Art Museum or the Millennium Bridge. These buildings aren’t just of Denver; they are Denver.

Does the Chapel Hills Mall, the Martin Drake Power Plant, Motor City or the new I-25/Cimarron interchange define us? These functional utilitarian constructs are hardly the stuff of dreams. Our aspirational buildings are mostly those we have inherited, like City Hall, the City Auditorium, the Pioneers Museum and the historic places of worship that ring downtown.

But maybe we’re on the verge of a new architectural era, one that will redefine Colorado Springs and the region.

“The Olympic Museum will change the dynamics of the city more than any building in our history,” said architect Mike Collins, a Colorado Springs native who has worked here for more than 50 years. “It’ll attract worldwide attention — it’s a major national project.”

The museum is noteworthy enough by itself, but it’s not alone. One era-defining building has just been completed, one is under construction and another will formally break ground next year. It’s true that one swallow doesn’t make a spring, but these four buildings, with an aggregate cost of more than $200 million, may show us that the past is but prologue.

Iin other words, you ain’t seen nothing yet!

Colorado Springs leaders have had an Olympic Museum and Hall of Fame on their wish list for at least 30 years. Absent an appropriate site, a credible funding plan and determined private-sector leadership, their wishes went unfulfilled. That all changed in 2013, thanks to former Colorado College President Dick Celeste and then-Mayor Steve Bach, who spearheaded the city’s successful application for state funding via the Colorado Regional Tourism Act. That set the stage for major financial commitments from individuals, businesses and foundations. Fundraising for the $80 million museum project is near completion.

“With approximately $6 million left to raise for construction, and $18 million remaining for the total project,” according to an Oct. 3 release, “museum supporters are confident in the new energy heading into the final stage of fundraising.”

“We are close.” said Celeste, who’s heading up the fundraising effort. “We have renewed enthusiasm from many stakeholders, and we’re confident that the construction process will begin in the next few months.”

The striking building, designed by New York City-based Diller Scofidio + Renfro, will occupy a 1.6-acre lot at the now-forlorn intersection of West Vermijo Avenue and South Sierra Madre Street. Expectations for the building are high, as they should be — the firm’s work earned it a MacArthur Foundation genius grant in 2004.

It had been clear since the late 1980s that the Pikes Peak Summit House needed to be replaced, but money and politics got in the way. A 1990s Pikes Peak master plan called for both building a new summit structure and paving the Pikes Peak highway, but a Sierra Club lawsuit forced the city to prioritize paving, drainage and environmental remediation.

Bach restarted the process soon after his election in 2011, and Parks and Recreation Director Karen Palus somehow managed to move the project forward. Doing so required the cooperation and assent of a dozen powerful organizations, including the U.S. Army, U.S. Forest Service, Department of the Interior, Pikes Peak Cog Railway and Colorado Springs Utilities. To be financed by highway and concessionaire revenues, lodging and auto rental tax collections and revenue bonds, the project will break ground (or, more accurately, break rock) next spring.

The airy, sunlit design, created by RTA Architects of Colorado Springs in partnership with Baltimore-based partners GWWO Architects, will allow the removal of a half-dozen functionally obsolete buildings from the summit (including the dismal, windowless 1965 Summit House). More than 500,000 people visit the summit annually, so the new building will instantly become a classic Colorado experience. Will it surpass that of the present donut shop/T-shirt emporium?

“That’s a very low bar,” said RTA’s Stuart Coppedge in an interview earlier this year. “I certainly hope so!”

Building a $60 million arts complex isn’t in the cards for most medium-sized public universities, much less for those in states that allocate so few dollars to higher education.

But there’s only one Pamela Shockley-Zalabak, and she’s the chancellor of UCCS. So when Shockley-Zalabak first started talking about the proposed arts center a few years ago, the community knew that it would be built — and soon.

It’s been a year since the August 2015 groundbreaking, and construction is well underway. Designed by New York firm H3 Hardy Collaboration Architecture, with Denver’s Semple Brown Design serving as the architect of record, the flowing, sinuous building occupies an elevated site on the west side of the UCCS campus on North Nevada Avenue across from University Village Colorado shopping center.

“I think what is unique is that within the 92,000-square-foot building there are four performance venues,” said J.E. Dunn contract manager Gary Vineyard. “Typically in this square footage there would be two. We are combining multiple types of high-end performance spaces on campus, which creates challenges and great opportunities for the campus, the project and the city.”

“The new Center for Character and Leadership Development [at the U.S. Air Force Academy] is one of the most important pieces of architecture to go up in Colorado — perhaps, in the entire West — in decades,” Ray Rinaldi wrote in the Denver Post month ago. “That’s bold praise, but not less than this assertive building deserves; it rises with precision and purity, with shrewd sensitivity to its circumstances and with an abundant belief in the power of design to inspire great action.”

Praise indeed, if a little overblown.

Yet Polaris Hall, whose transparent “airfoil” spire will point to the North Star for generations to come, is ambitious and beautiful. In form and spirit, it seems to echo the transcendent 1962 Cadet Chapel, and for good reason. Walter Netsch of Skidmore, Owings and Merrill designed the chapel, and SOM was selected to design the $46 million Polaris Hall building.

Private funders contributed $18 million to the project, enabling the architects to create a building that soars and inspires, not one that’s merely good enough for government work.

The USAFA campus is in its entirety a signal achievement of modernist architecture, little altered from its original 1950s conception. Any addition, especially one within a short walk of the Cadet Chapel, is inherently problematic.

Time will tell, but it may be that SOM has hit another home run.

Four good (maybe even great) public buildings — are there more to come? If the regional economy remains strong, will commercial and civic builders hold themselves to a higher standard? That remains to be seen.

“So much in architecture is budget- and client-dependent,” said Andrea Barker, a principal at HB&A Architects in Colorado Springs. “Every commercial project has very pragmatic beginnings.”

Barker’s firm designed the Blue Dot Apartments on South Nevada Avenue. Developers Kathy Loo and Darsey Nicklasson didn’t have an unlimited budget, but the Blue Dot is nevertheless a wonderful improvement to a once-dreary block.

“Our civic structures can be great,” continued Barker. “I’m a member of the First Congregational Church, which was built by the people who founded Colorado College. I would hope that (in our new public buildings) we’re elevating the city, and not just in appearance — that we’re reaching for the future.”

And it may be that architects and builders will figure out ways to overcome budgetary constraints. The Cadet Chapel as originally designed had 19 spires, but budgetary considerations forced Walter Netsch to cut it to 17.

That’s a 10 percent cut. In retrospect, we’re probably lucky that Netsch didn’t specify 17 to begin with — the bean counters might have cut it to 15.