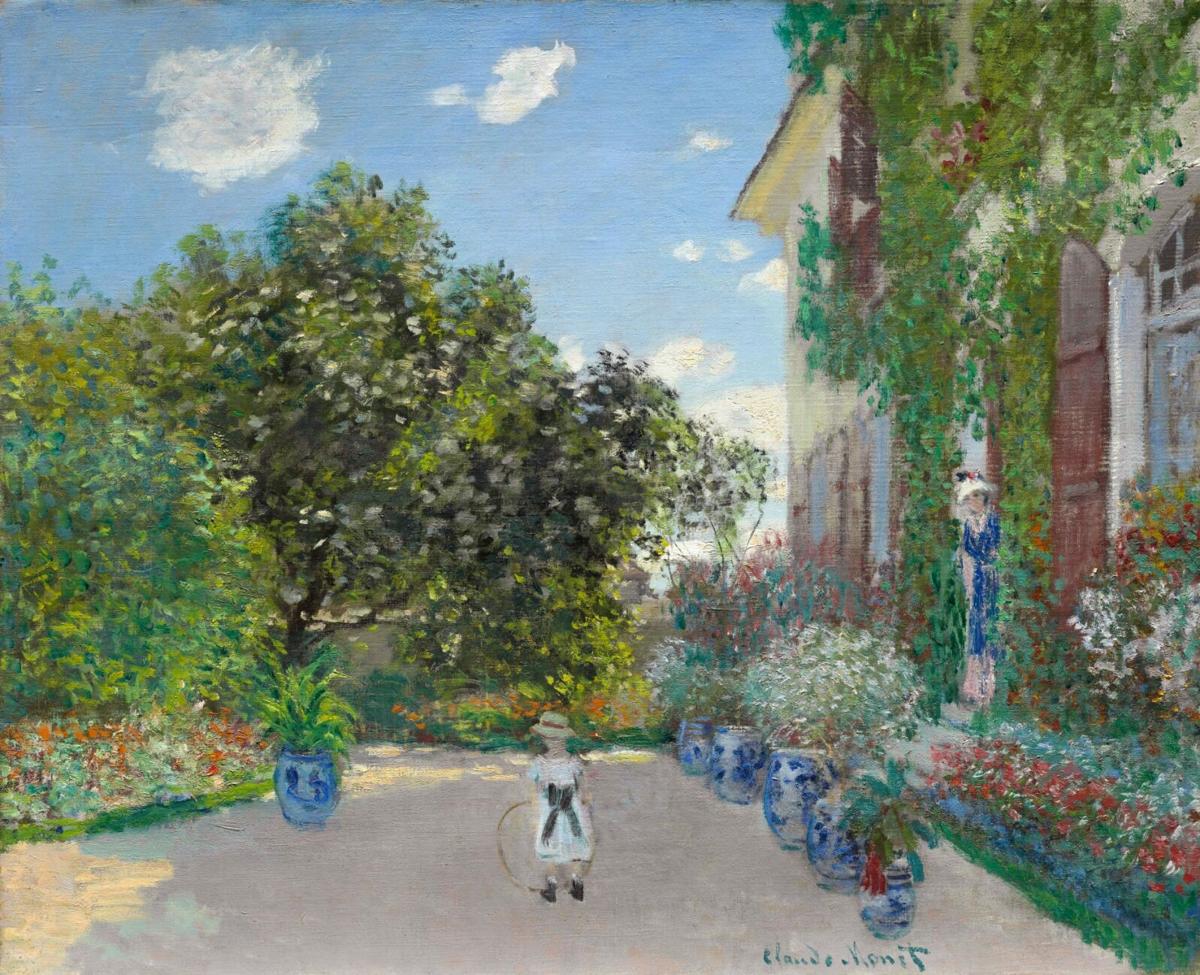 “The Artist’s House at Argenteuil” (1873) shows Monet’s son playing at their home outside Paris.

The Denver Art Museum will open “Claude Monet: the Truth of Nature” on Oct. 21. Co-created by the DAM and the Museum Barberini in Potsdam, Germany, Denver will be only American museum to host the show.

It will be, according to the DAM, “The most comprehensive U.S. exhibition of Monet paintings in more than two decades. The exhibition will feature more than 120 paintings spanning Monet’s entire career and will focus on the celebrated French impressionist artist’s enduring relationship with nature and his response to the varied and distinct places in which he worked.”

In other words, it’s a blockbuster.

Thomas Hoving, the freewheeling director of New York’s Metropolitan Museum of Art from 1967 to 1977, is credited with the invention of the blockbuster. Defined as expensive, unique and highly publicized exhibitions that jumpstart attendance and fundraising, such shows were once disdained by stuffy traditionalists.

Hoving, who had characterized the Metropolitan as “moribund, gray and dying” before he took over, didn’t give a damn for tradition.

“Great art should be shown with great excitement,” he said, and proved his point with shows like the Treasures of Tutankhamen, which drew 6.9 million visitors during its extended American tour, including 1.3 million at the Metropolitan.

But, as Colorado Springs Pioneers Museum curator Leah Davis Witherow noted, there are no guarantees.

“Blockbusters carry reputational and financial risks,” she said. “You have to weigh the costs — failure can do long term damage, alienate supporters and affect fundraising for years.”

Expectations are high for the DAM, which is in the final stages of a two-decade reinvention. In 2006, the museum opened the Hamilton Building, the still-spectacular Daniel Libeskind designed 146,000 square foot addition to the existing Gio Ponti designed 1971 building. A $62.5 million public bond issue funded direct construction costs, and the museum privately raised another $23 million, as well as mounting a $60 million endowment campaign to fund ongoing maintenance costs.

The DAM is also a major recipient of revenue from the seven-county Scientific and Cultural Facilities Tax, which provided $8.2 million in support to the museum during fiscal year 2018.

The 1971 building was closed in 2017 for a $150 million renovation that is due to be completed in 2021. A voter-approved city bond issue will fund $35.5 million of the total cost, with the remainder coming from private donations. The building will be renamed the Martin Building, honoring donors Lanny and Sharon Martin, who ponied up $25 million for the project.

First conceived four years ago, the Monet show has faced logistical challenges comparable to those of a major company launching a “make or break” new product line. It began as an idea that DAM director Christoph Heinrich and Museum Barberini director Ortrud Westheider came up with at the Barberini’s opening in Potsdam in 2017.

“We thought that we should do something together,” Heinrich recalled, “and we thought about Monet. We’re both strong in impressionists – especially the Barberini.”

Westheider and Heinrich had begun their careers three decades earlier when they served as junior curators at the same institution, and the idea quickly grew wings.

“We decided to do something that as a museum person you may only do once in your lifetime,” Heinrich recalled, “To do the whole scope of Monet’s work – and we have.”

The exhibition focuses on Monet’s relationship to nature, a show that would explore the sources and inspiration of many of his greatest works.  Both museums had substantial Monet collections and directors and curators with extensive connections to collectors and museums worldwide. They knew where the paintings were, and knew the decision makers who might agree to loan works. After getting approval from their boards, they staffed up, made their pitches and began the long process of creating the exhibition. Major lenders would include the Musée d’Orsay, Paris, Musée Marmottan Monet, Paris, Museum of Fine Arts, Boston, The Art Institute of Chicago, and the Metropolitan Museum of Art. Smaller museums and private collectors were also important as the DAM/Barberini team cast a worldwide net.

“There are 72 lenders from 15 countries,” said senior communications manager Shadia Lemus. “This is the largest exhibition the DAM has presented in almost 10 years. The show will span three large galleries, encompassing 23,000 square feet.”

Telephone calls and emails don’t work when you’re trying borrow major artworks, so directors had to personally pitch dozens of potential lenders. Almost four years after Heinrich and Westheider had their fateful tête-à-tête in Potsdam, the exhibition is ready to go.

“For the exhibition,” according to the DAM, “more than 20,000 square feet of DAM’s gallery spaces will be filled with works spanning the entirety of Monet’s career, from View from Rouelles, the first painting the French artist ever exhibited at age 18, to The House Seen through the Roses, a piece he completed in 1926 just weeks before his death.”

One hundred and fourteen paintings had to be packed, insured and transported to Denver — and every one of them extraordinarily valuable. In recent years, Monet prices have soared from astronomical to otherworldly. For example, one of Monet’s 25 “Meules” (Haystacks) series sold at Sotheby’s on May 25 of this year for $110.7 million, eclipsing the previous Monet auction record of $84.6 million. And yes, the exhibition includes a painting from the Haystacks series, as well as masterpieces from every period of his long career.

Clearly, you don’t pack such paintings up in bubble wrap and entrust them to UPS. Packing and transportation are usually contracted out by museums to specialized firms. Carefully packed in unmarked boxes, the borrowed Monets will likely be accompanied on their voyages by road and air by guards and   curators from lending institutions. Insurance costs are affordable thanks to U.S. Federal Indemnity, a program created by Congress in 1975 to help minimize the costs to museums of insuring international exhibitions. Securing this designation is a competitive process; without it, the show might never have gotten off the ground. Absent federal guarantees, the Guardian reported in March that “the premium on a work by a major-league artist on three-month loan (to a major institution) might be £80,000 (about $66,000).”

The two museums must also provide enhanced security for the duration of the exhibitions. Irreplaceable artworks can be severely damaged or destroyed in a few seconds, as the DAM experienced on Dec. 8, 2018 when an 18-year-old Monument resident rampaged through an exhibition in the Hamilton Building. Although security guards quickly restrained him, ten Chinese and Mayan artworks were badly damaged.

Given the costs and risks of such undertakings, why do museums bother? Museum curators and directors will tell you that they’re fulfilling their basic mission: displaying great works of art to visitors who might never again have such an opportunity.

Yet the DAM’s collection, numbering more than 70,000 objects, is both wide and deep. By simply rotating the permanent collection, the DAM could fill its walls for decades with new shows – but would that create excitement or boredom? Critics might hammer the museum for stodgily displaying “Treasures from Subbasement Storage Area B14”, while the public might simply yawn.

As the show’s Oct. 21 opening day approaches, the public response is overwhelmingly positive.

“We know that there is already a lot of high level of interest in this exhibition based on media coverage, social media engagement and ticket sales,” Lemus confirmed. “While we don’t share attendance expectations, the museum anticipates Claude Monet: The Truth of Nature will be one of our most well-attended exhibitions in recent years, as some time slots are already sold out. We highly encourage individuals to purchase their tickets in advance of visiting the museum.”

The show will close on February 2, 2020, giving would-be viewers a three-month window. Admission is $27 for adults, $5 for youth 6-18 and free for kids five and under.

The reduced admission price for teens pleases Heinrich, who was introduced to modern art through Monet as a young teenager.

“There’s always the little boy in awe,” he said. “As you get older, you try to analyze but I think the little boy does not go away – being in awe of something that’s larger than yourself.”